The Archers, Michael Powell and Emeric Pressburger, collaborated on eighteen films over a thirty year period (1939-72).  While their first true “Archer” production (where they share writing, directing and producing credit) didn’t come until 1943 with The Life and Death of Colonel Blimp, they had previously worked on four films together.  Usually, it was Powell who did the bulk of the directing and Pressburger who came up with the story ideas and handled most of the production chores (especially when it came to editing and music incorporation). Some of their endeavors are quite memorable, like Black Narcissus (1947) and The Red Shoes (1948), while others are easily forgotten, such as The Battle of the River Plate (1956) and Ill Met By Moonlight (1957).  Somewhere in-between their masterpieces and their flops is located I Know Where I’m Going! (1945), which stars Wendy Hiller as a young woman who’d rather marry for money than love.

Manchesterian Joan Webster (Hiller) is supposed to marry wealthy industrialist Sir Robert Bellinger (Norman Shelley’s voice—he’s never seen) on the Isle of Kiloran, but the weather (or fate) in the Scottish Hebrides has other plans.  For 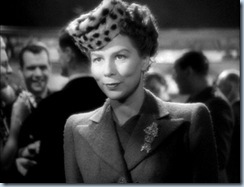 some reason I’ve never really liked Hiller. I don’t know exactly why, but I think it’s her voice—it just rubs me the wrong way. Still, she was a decent actress who was nominated for three Oscars (she won one for Separate Tables [1958]) and she worked in the industry for nearly sixty years.  In I Know Where I’m Going! she does a nice job of portraying her character’s steely determination to not be sabotaged by love (and an island full of eccentric Scots).  However, I like her much more in the beginning of the film when she is calling her bank managing father “Darling” (George Carney) than I do when she is risking poor Kenny’s (Murdo Morrison) life to get across to Kiloran.

Roger Livesey (an Archer veteran) gives his usual steady performance as Torquil MacNeil (what a name!). A kilt-wearing naval officer, Torquil is the broke Laird of Kiloran (FYI a laird is one step below a baron) and the owner of the Isle of Kiloran.  He sees in Joan a woman he would like to tame, but unlike Petruchio, he attempts to do it with kindness and 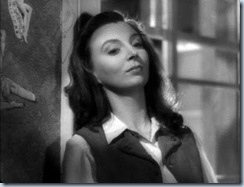 patience. Too bad his childhood friend Catriona (Pamela Brown) is married, because she is much prettier and, more importantly, way more interesting than Joan.  It just grates on my nerves when the supporting actress is more enjoyable than the lead actress (see Kristen Scott Thomas and Andie MacDowell in Four Weddings and a Funeral [1994]).  In addition to Livesey and Brown’s nice acting turns, Captain C.W.R. Knight is a hoot as Colonel Barnstaple, a falconer with a delightful sense of style.

What I think sets this movie apart from a number of others during this period is it’s cinematography. This was most probably cinematographer Erwin Hillier’s best work over his thirty year career.  It is said the he didn’t use a light meter at all, which must have made his task more difficult than usual, especially when you consider the weather conditions.  There 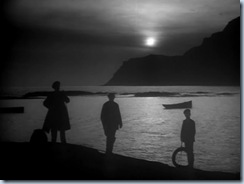 are many long distance shots that capture the overall majesty of the Scottish shoreline.  As someone who has spent time in the Scottish towns of Carnoustie and Killin it was a reminder of just how beautiful the land of Scots can be.  Hillier also used a hand-held camera to capture some of the close-up shots—most notably the ones of the boat struggling against the Corryvreckan whirlpool.  Interestingly enough, what most people don’t know is that Livesey never once set foot in Scotland for any of the location shots because he was doing a play in London at the time they were shot.

Overall, I Know Where I’m Going! is a somewhat enjoyable light romantic comedy.  Other than some very fine photography, there is not much else that stands out.  Still, it was nice to learn a little bit about Scottish customs, and the bagpipes weren’t played so much that I  wanted to hit mute too often, either.
Posted by Kimberly J.M. Wilson at 11:54 AM

Email ThisBlogThis!Share to TwitterShare to FacebookShare to Pinterest
Labels: **, 1945, Powell and Pressburger