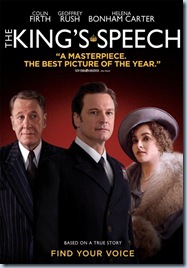 One of the best films I’ve seen in years.  Everything is stellar about this 2010 Academy Award winner for Best Picture, Best Actor, Best Director, and Best Original Screenplay.  The acting is courageously superb; the costumes are spot-on; and, the story is inspiring.  There was nothing I didn’t like about this film (sans the fact that Helena Bonham Carter wasn’t in it more).  Watching director Tom Hooper’s masterpiece was a highly enjoyable experience—something that is sorely missing in most movies today. 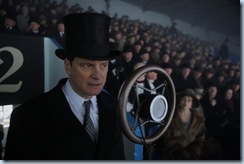 ammer.  From the start of the film we see how truly debilitating this stammer is, as the then Duke of York, Prince Albert (AKA Bertie), struggles through a speech at Wembley Stadium.  Overcome with feelings of helplessness for her husband, the Duchess of York, Elizabeth (Helena Bonham Carter), locates highly recommended speech therapist Lionel Logue (Geoffrey Rush) and asks him to treat the prince.  What ensues is an unlikely story of friendship and courage.

I suppose what I liked most about the movie is that it wasn’t about some miracle cure that freed the king of his ailment.  Instead, it was a story about why the king stammered and how he learned to manage it.  Through his dealings with his overbearing father, King

George V (Michael Gambon), and his selfish brother, King Edward VIII (Guy Pearce), we see why Bertie stammered.  Bullied and made fun of by his own royal family (and even mistreated by a nanny!) because of his stammer, Bertie had issues of self-confidence, which only intensified the stammering.  The idea of having to give a speech or a radio address terrified him.  That is why he put up with Lionel’s total disregard for royal etiquette and protocol.  I think Firth does an excellent job not only with the stammering vocalizations the role calls for, but also with exhibiting the inner turmoil and frustration that the king has.  There is a truly terrified look in his eyes at times.  The facial constraint alone must have been exhausting.

Both Helena Bonham Carter and Geoffrey Rush earned Best Supporting Acting nominations for their roles.  Carter is a subdued but plucky

Duchess of York.  I usually enjoy her in just about everything, so I was not surprised to hear her very precise English diction or to see her refined regal posture. Oh, and the look she gives to Wallis Simpson (Eve Best) upon their meeting at Balmoral Castle is priceless. Much like Carter does, Rush makes his performance seem effortless, though it is anything but that.  His Lionel can be confident and irreverent one minute and in the next be timid and respectful.  I think he and Firth play very well off one another, and the friendship that develops between the two men seems palpable.

While the entire film is stellar, there is one scene that is better than the rest.  Since the film is called The King’s Speech it should come as no surprise that the pinnacle of the film is when the king gives his September 3, 1939, speech asking the British people to stand 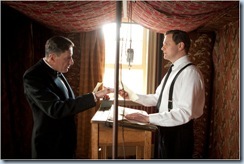 united with him against Nazism. Showing any sign of weakness is not an option when a nation is at war, and so the king must appear strong and steady.  The staging of the delivery of the speech is masterfully done.  Set to the second movement of Beethoven’s Symphony No. 7, Lionel comes off as the conductor and the king as the instrument of the British people.  Watching the king use the techniques he has learned from Lionel while giving the speech of a lifetime is inspiring and a little hair-raising as well.

Now, as a historian I must caution that there are some historical inaccuracies, but nothing that was so egregious that I couldn’t enjoy the film.  Still, please know that they portray Churchill in a much more positive light than he deserves, and even the king was not without fault when it came to dealing with the Nazis.  Consult your history books for a more accurate representation of this period.