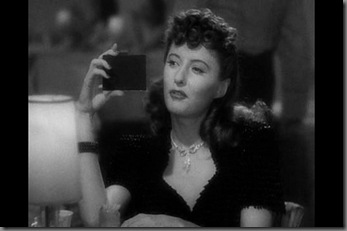 (While this is my own unique retelling of the story, there are spoilers.)

Good God, I do look good!  Oh, hello there, suckers.  My name’s Jean Harrington (some of the time at least), and I’ve been asked to discuss the art of the grift (con, scam, swindle—got it now, schmuck?).  This is a complicated subject and can take years to master, so I’m gonna dumb it down for those of you who weren’t raised in the racket and focus on my own personal story. 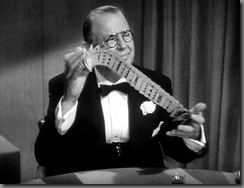 Some people are just born to be grifters—in my case, literally. I was raised by a card sharp named ‘Colonel’ ‘Harry’ Harrington (Charles Coburn). Grift Tip No. 1: Anyone who has ‘ ’ around their name is not to be trusted. You see, you’re either a colonel or you’re not—there’s a big difference between Colonel Custard and ‘Colonel’ Sanders…unless you’re a hungry Indian craving white meat.  Now, don’t get me wrong, I trust Harry, but that’s because I know all of his tricks and I never take my eyes off of him.

As far back as I can remember Harry and I worked the luxury liners with our ‘valet’ Gerald (Melville Cooper).  There are lots of rich mugs who think they know how to play cards—problem is, they’re always under the illusion that everybody plays fair and square.  Yes, there’s a sucker born every minute—even in a silver spoon nursery. Grift Tip No. 2: If you want to be seen as rich all you have to do is wear designer clothes and tasteful jewelry;  hint at an oil field or a gold mine; and, appear affable and sophisticated.  And, that brings me to the greatest m 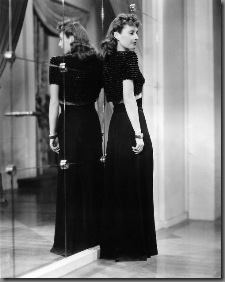 Heir to a brewery fortune, Hopsie was a snake enthusiast and a chump I met on an outbound boat from South America.  My first impression of him was that he needed more fiber in his diet, so I dropped an apple on the lunkhead.  This not being a proper introduction, I bided my time by picking out my sexiest outfit (a two-piece number: long black skirt with a slit up to heaven and a short black beaded top which exposed my flat midriff) designed by my personal couturier, Edith Head. I then strategically placed myself in the dining room and waited for an '”accidental” meeting.

Grift Tip No. 3: The best way to appear disinterested but still 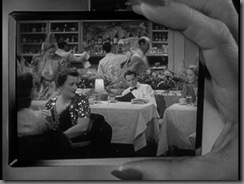 keep your eyes on the prize is to use a pocket mirror to spy on your prey—plus, you can reassure yourself that you are definitely worth it. Once your mark has been spooked by countless hapless fortune hunters and attempts his escape, nonchalantly stick your glamorous gam out and trip him. And, that’s exactly what I did to Hopsie.  I just had a feeling that man was a klutz!  While he was still on the defensive I feigned indignation and outrage that he broke one of my pricey heels.  I then demanded that he escort me to my cabin to exchange my evening slippers. Once I had him alone in my room I turned up the heat and showed off my assets—first impressions are everything, you see.  Men who have been trapp 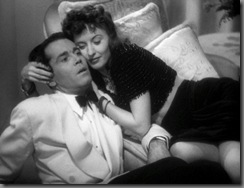 ed in the jungle for an extended amount of time are susceptible to intoxicating perfume, sexual repartee, and light, but not so innocent, petting.  Suffice to say, Hopsie was quickly on the hook and all I had to do was reel him in, but then something quite shameful happened—I fell in love with my mark.

I don’t know how it happened: one minute I’m thinking what a schmuck this guy is for showing Harry and me 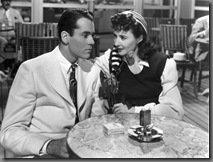 how to palm a card and counting all the money we’re gonna take from him, and then the next thing I know I’m planning on marrying him and going straight.  Surely, I must have caught some strange jungle disease when I ran my fingers through his hair and canoodled with him!  I started spending my time double-dealing Harry and conducting business on moonlit decks.  When I look back on it all I should have seen the signs of fever-induced delusions: wearing a Christmas stocking as a hat, acting out scenes from Titanic, an 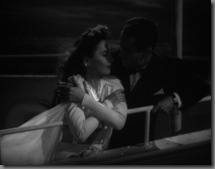 d believing that I could settle down with an ophiologist—a word and an occupation that decent people should never have to learn about!  It was all going so fast and I didn’t know whether to jump ship or get on board with love.  Then, something inexplicable happened: the grifter became the grifted.  Seems I’d been played for a fool by Hopsie—he’d known all along that Harry and I were con artists and he just wanted to teach us a lesson. Grift Tip No. 4: Love is for suckers! No explanation needed, I’m sure!

You’d think this is where the story ends, but what kind of grifter would I be if I told a story where I ended up with the shortest matchstick? No, I knew I couldn’t be so wrong about how much of a dope Hopsie was and I kept an eye out for an opportunity to settle the score.  Due to pesky U-boats in the Atlantic, my crew and I had to settle in the Big Apple for awhile. One d 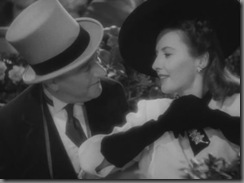 ay, after losing a good chunk of change on a horse that ran fifth in a five-horse race (really, what did we expect when we bet on a goat called "After You?"), we ran into Alfie, or Sir Alfred McGlennan Keith to his common American marks (Eric Blore).  When I learned Sir Alfie  was on his way to Bridgefield, Connecticut, I instantly thought of Hopsie. As fate would have it, Alfie was acquainted with the Pike family.  My mind did a quick checklist of all the reasons it knew Hopsie was a fool, and then I asked Alfie if I could pose as his niece on his displaced nobility grift. I brushed up on my British accent and colloquialisms and assumed the name Lady Eve 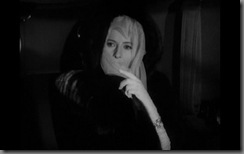 Sidwich.  I know what you’re thinking, but rest assured it wasn’t love I was after (that would be Bette Davis).  No, I needed Hopsie like the axe needs the turkey, and I was going to have my revenge.

Looking back on it all it seems so biblical.  There I was in the Garden of Eden of all grifters: a Connecticut mansion filled with shiny apples ready to have their pockets plucked.  Hell, there was even a real snake on the loose—no, not me (but I see how you might infer that).  I arrived at the Pike mansion under cloak (really a huge fur), as I was still a bit unsure of my plan.  Once I 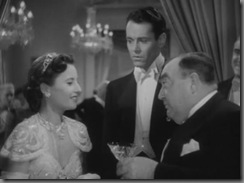 got past Hopsie’s bodyguard and babysitter Muggsy (William Demarest), I entered the great hall as the guest of honor and proceeded to have every man hang on my every word.  Quite simply, and British, I looked smashing.  The first to succumb to my charms was Mr. Pike himself (Eugene Pallette)—the father, not the son (didn’t I say it was biblical?). At first, Hopsie was nowhere to be found (I suppose he was playing with his snake somewhere).  Ah, but then he appeared—and what a perplexed look he had on his face. Grift Tip No. 5: When you happen upon a previous mark ask them if you know them from somewhere. This confirms their belief they’ve crossed your path before. Plus, it looks like you don’t have 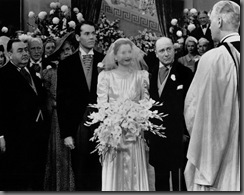 anything to hide from them.

You’d think it would be more difficult to convince a man with whom you canoodled that you weren’t the same woman who tried to con him on the high seas.  In a way, I was a bit peeved at how easily I pushed my real identity out of Hopsie’s mind. Of course, this feeling was quickly usurped by an overriding disbelief that I once loved a man who could be fooled by a royal title, a British accent, and a small tiara.  It didn’t take long before I had Hopsie back under my spell, but what did I want to do with him?  What better punishment was there for a bachelor than marriage?  And, so, yes, I did it: I married my mark. Ah, but I wasn’t quite done with that idiot just yet. Grift Tip No. 6: Sell the game to the bitter end and then have a well-designed escape route. 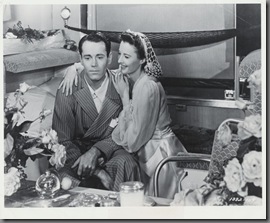 We opted to spend our wedding night on a train. I donned my best sheer negligee and eagerly awaited the entrance of Hopsie into my cozy compartment.  He was nervous—it was obvious this was his first ride on a train. I tried to calm him down by recounting other train rides I’d taken. Surely if men like Angus, Herman, Vernon, Cecil, John, Hubert…or was it Herbert…could enjoy a train ride with me, so could Hopsie!  Perhaps he was afraid of tunnels—I always found entering and exiting them to be exhilarating.  It was all just so odd! You’d think a man who liked to play with snakes wouldn’t be so frightened of a speeding train.  It was like being in one of those Preston Sturges’ films, except there was no sex.  Maybe I shouldn’t have told him about those other guys, because he got off the train at the first stop.

And, so there I was—married and abandoned in a day by an heir to millions.  Somehow I just didn’t feel like I had exacted enough revenge on old Hopsie. Grift Tip No. 8: If you can have your cake and eat it too, eat the entire thing.  Why should I settle for a piece of the Pike pie when I could have the whole thing? Yes, I know I have mixed my food metaphors, but they are both desserts and that’s what I was going to have: 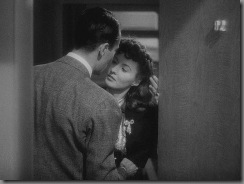 my just desserts! So, when the lawyers called about divorce proceedings I ignored them.  Knowing Hopsie to be a creature of habit I returned to the high seas armed with my pocket mirror, my long, shapely legs, and my real name.  It wasn’t too long before Hopsie was escorting Jean Harrington…um, Pike…to her cabin.  Yes, he was a bit shocked when I revealed to him that Jean and Eve were one in the same—but this time I waited until he got used to the motion of the ocean.  Grift Tip No. 7: There is no greater con game than love. 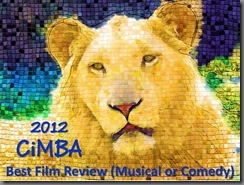 (This post was honored with a 2012 CiMBA for Best Musical or Comedy Review.  Obviously, this was a comedy.)