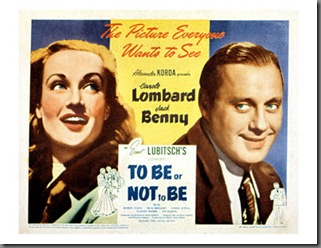 Director Ernst Lubitsch made many great films in his distinguished career, but if I had to pick just one to call my favorite it would be To Be or Not to Be (followed very closely by Ninotchka [1939]) from 1942.  Released on March 6, 1942, almost 3 months to the day that the Japanese attacked Pearl Harbor, the movie was not well-received by critics or moviegoers. People didn’t think it was funny to make light of the Nazis when they were on the brink of world domination.  To that, I say, “Ah, nuts!”  What better time was there to make the vilest group of ideologues look completely ridiculous?  If you can laugh at them, then you most certainly can beat them!

Born to Jewish parents in Berlin, Germany, Lubitsch was 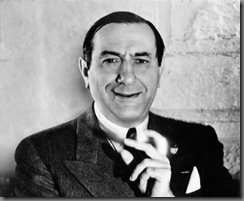 well aware of the dangers of Nazism. While he came to Hollywood long before the Nazis took power in 1933, Lubitsch had friends and family back home who weren’t so lucky.  Still, some American film critics were either oblivious to the Nazis’ complete hatred of Jews or just plain idiotic when they cried foul about a Berlin-born director making a film about the Nazi invasion of Poland. Did they really think he thought people should laugh at that tragic event?  Lubitsch found the critiques to be asinine and tried to explain that he had satirized the “Nazis and their ridiculous ideology” not what happened to the Polish people.

The one thing that critics did like about the film was leading lady Carole Lombard.  Tragically, Lombard was killed in a plane crash two months prior to the film’s release. 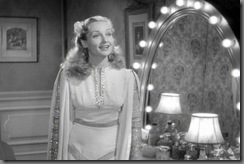 Today, her portrayal of Maria Tura in To Be or Not to Be is considered the finest of her career.  Yet, she almost didn’t play the part, as Miriam Hopkins was Lubitsch’s first choice. Having worked with Lubitsch on three of her best films, Hopkins was experiencing a downturn in her career when her old friend decided she was ready for a comeback. Unfortunately, at least for Hopkins but most certainly not for me or Lombard, Hopkins and lead actor Jack Benny didn’t get along from the start of production.

The story, penned by writers Melchior Lengyel and Edwin Justus Mayer, is about a Warsaw acting troupe who find themselves accidentally em 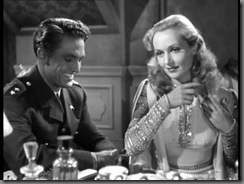 broiled in the Polish resistance against the Nazis following the 1939 invasion.  Josef Tura (Benny) and his wife Maria are renowned Warsaw actors.  He is a self-absorbed ham who happens to love playing Hamlet; while she is an incorrigible flirt who upstages her husband without even being on stage by having her male admirers come to her dressing room when Josef begins Hamlet’s famous soliloquy, “To be or not to be…” One of those admirers, Lt. Slobinski (a very young Robert Stack), is a Polish pilot who brings the entire acting troupe into his mission to intercept a double agent before vital information can be given to the Nazis.  What transpires is an outrageously funny shell game between trained killers and trained actors.

I love black comedies, and this is one of the best.  There are so many layers of ironic humor that it might take multiple viewing before you catch everything Lubitsch and his screenwriters were trying to get across. For example, while the audience finds it funny when Josef has his soliloquy—his big moment to shine—constantly interrupted by Maria’s suitors, there is another element to this as well.  While we never get to hear the whole thing, the beginning goes something like this:

To be, or not to be--that is the question:
Whether 'tis nobler in the mind to suffer
The slings and arrows of outrageous fortune
Or to take arms against a sea of troubles
And by opposing end them

These words truly resonate when you apply them to the Nazi peril.  In a way, it’s almost a war cry, if you think about it.  The world was most definitely facing a sea of troubles with the Nazis!

The other shining ironic moment is when Josef, Greenberg (Felix Bressart), Bronski (Tom Dugan) and the rest of the male actors pretend to be Nazis in order to infiltrate a theater event attended by Hitler. Once safely inside, they 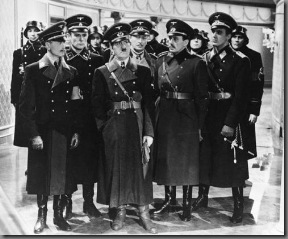 create a disturbance which allows Bronski to impersonate Hitler himself without the Nazis knowing.  For someone so revered by his underlings, and so unmistakable to the German psyche, this seems brazenly irreverent to me.  What better statement could you make about demagoguery than this?  Is there really a difference between the Führer and a Betrüger (imposter)?  According to Lubitsch and this film, not really.

Packed with sophisticated dialogue and impeccably placed double entendres, To Be or Not to Be is a comedy for the ages.  I can also appreciate the risk that Lubitsch and Alexander Korda took in releasing this film when they did.  Perhaps the American public and film critics weren’t ready for it, but it was just the type of film that the world needed to see in the Spring of 1942.  No one is invincible, and anyone who thinks that they are deserves to be heartily laughed at.