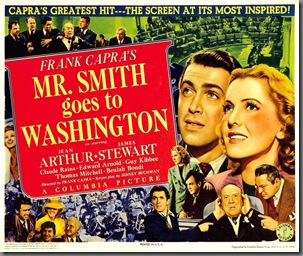 Who runs Washington? How does one become a congressperson, a senator, or the president? These questions were asked in 1939—and are still being asked today. Americans would like to think that idealists like Jefferson Smith (James Stewart) go to Washington to serve the best interests of those they represent.  Yet, in reality, few idealists ever get to Washington, and if they do get there they are quickly disillusioned by the political process.  Most rational Americans today know that the political process has been corrupted, but I’m not quite so sure that people were so aware of what happened in Washington back in 1939—the year this film, like so many other classics, hit the silver screen. 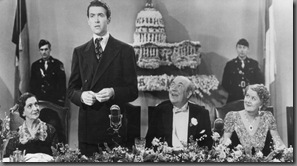 Nominated for eleven Academy Awards (Best Picture, Best Director [Frank Capra], Best Actor [James Stewart], Best Supporting Actor [Harry Carey and Claude Rains], Best Score, Best Sound Recording, Best Film Editing, Best Interior Direction, Best Screenplay, and Best Original Story [winner Lewis R. Foster]), the film was almost put on the shelf after the outbreak of WWII in Europe.  It would seem that some thought the film presented the shining beacon of democracy as a corrupt cesspool operated by political thugs.  And, really, those people were partly right, but there’s more to the story than that.  Sure, director Frank Capra shows the dirt under the political rug, but he also brightly polishes the true meaning of patriotism and republicanism.

Mr. Smith Goes to Washington is the simple story of a common man thrown into a complicated situation.  Jefferson Smith is called upon to represent his state (never identified) as a junior senator when his predecessor, Sam Foley, dies.  Needing to fill the position with someone who will be easy to control, 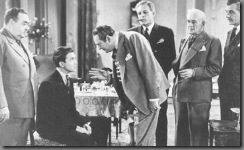 Governor "Happy" Hopper (Guy Kibbee) chooses Mr. Smith because he is regarded as a hero and loved for his work with the Boy Rangers (think Boy Scouts)—plus, he has no political experience whatsoever.  As such, he represents, in the words of the governor, “the perfect man, never in politics in his life, wouldn't know what it was all about in two years, let alone two months. And the important thing it means votes. A hero of 50,000 boys, and a hundred thousand parents.”

Why is it so important that the governor find a “yes” man?  Because he and every political office holder in the state are beholden to political boss Jim Taylor (Eddie Arnold). Taylor has bought up land surrounding a canyon along Willet Creek and wants his political stooges to push through a bill that will provide government funding for a dam—which would 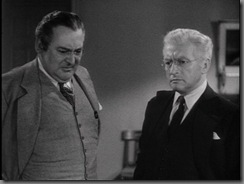 allow him to sell the land he’s bought up for a huge profit. Quite simply, it’s the blue ribbon of political pork. Taylor controls everyone, even Senator Joe Paine (Claude Rains), a man some think might be the next president. Indeed, Senator Paine is admired by many, especially by Mr. Smith, whose father was Paine’s best friend. Ah, the dangers of hero-worship.

Capra is quite crafty in how he juxtaposes the backroom dealings of a corrupt political machine with Mr. Smith’s honest reverence for freedom and democracy.  While Taylor, Hopper and Paine are always working the system in closed rooms (they choose who’s allowed in), Mr. Smith revels in the openness of the monuments of Washington (where everyone is welcome).  Even the Senate chamber (expertly 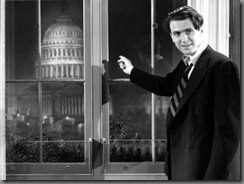 recreated by Lionel Banks) is used to show the many faces of the political process. While Smith sits at his desk, once occupied by Daniel Webster, he can see common, everyday people looking on in the gallery. Yet, in this same chamber, you can see senators working the system and attempting to stymie the wheels of truth and justice.

There is an educational bent to the film as well. Mr. Smith’s secretary, Clarissa Saunders (the top-billed Jean Arthur), is supposed to make sure he shows up for roll call and that he votes how the machine wants.  In the beginning, she thinks he’s a big dope and refers to him as Daniel Boone and Don Quixote.  You see, she is the cynical Washington insider who knows how things work, and when some country bumpkin starts spouting off about the virtues of democracy 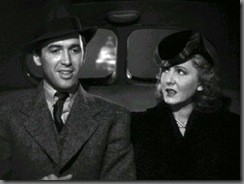 she thinks he’s beyond naïve. She’s also not pleased that he wants to write a bill to start a national boy’s camp.  And, this is where the educational bent comes in.  Trying to dissuade him from his idea she explains the very long and tedious process of what it takes to get a bill passed.  Just her explanation alone is a civic lesson in itself—and perhaps an eye-opener for many audience members.  You must remember, they didn’t have School House Rock and “I’m Just a Bill” in 1939!

Of course, the fact that he wants to build this camp along Willet Creek also creates another problem for Saunders—as she knows about Taylor and Paine’s porked-up plan.  What to do?  Like many secretaries of the 1930s, Saunders is smarter than the boss and so she holds his hand as he first presents the bill and then gives hi 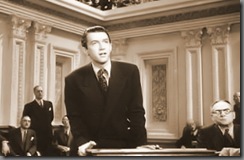 m a crash course in political trench warfare after Paine and the machine discredit and crucify him.  And, this brings us to the famous 23-hour filibuster, where Mr. Smith refuses to yield the floor by reading from the Constitution and various other documents in the hopes that someone, specifically Paine, will clear his good name. Jimmy Stewart always played his righteous characters with just enough instability that they didn’t seem sanctimonious and/or preachy.  You see the complete destruction of his character in these scenes.  At the beginning of the filibuster he seems hopeful and self-assured—surely he will be able to convince the 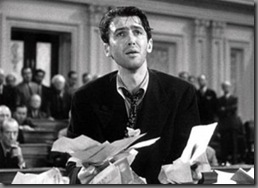 chamber that he is innocent.  But slowly, his strong voice and straight as a rod back start to falter.  His posture droops, his voice cracks, his clothes wrinkle, his hair musses.  What did democracy look like in 1787? Perhaps like Jefferson Smith when he began his filibuster—confident and composed. What does democracy look like in 1939? Like Mr. Smith at the end of his filibuster—defeated and disheveled.  Ah, have heart, there’s more to the story than that, but you need to watch it for yourself to find out.

Mr. Smith Goes to Washington is a political morality tale about living up to the principles of republicanism—government of the people, by the people, for the people.  Who knew a monument could play a supporting role in a film? Everyone, even Lincoln himself, plays their part well. Eddie Arnold is the epitome of the vile political boss who 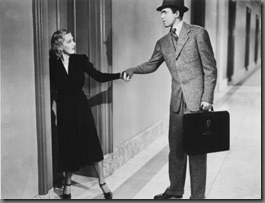 will stop at nothing (not even running children off the road) to get what he wants. Claude Rains takes the part of cynical politician to a whole new level—you either want to slap or hug him.  Jean Arthur is her usual wise-cracking self, playing a Washington-weary woman just waiting for the right man to come along so she can show her heart of gold.  And, James Stewart does naïve as only he can—desperation and despondency never looked so believable.

Final assessment: we could use more Jefferson Smiths in America today. Oh, and the film is quite good, too.