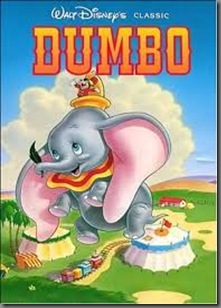 Have you ever watched a film as a child and then later as an adult?  What your childhood memory usually holds for you is not exactly a full representation.  Upon adult reintroduction you notice all sorts of things that just flew right over your kiddie head.  This is what recently happened to me while watching the Walt Disney animated classic, Dumbo (1941).  Who knew a Disney film could have so much debauchery! 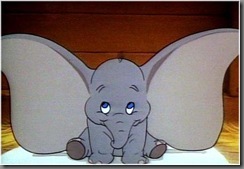 If you have a child, know a child, or once were a child yourself, you no doubt have seen Dumbo.  Yet, as I believe it is possible that aliens walk amongst us, let me do a quick synopsis. Dumbo is a baby elephant who has inordinately large ears which make him both clumsy and the object of ridicule.  When his mother is locked up for trying to protect him, Dumbo finds himself shunned by the other elephants. His only friend in the world is a mouse named Timothy who is always trying to find ways to make Dumbo a star. Reduced to the ultimate humiliation of becoming a clown, Dumbo’s redemption is found in the most unlikely place—his ears! At this point, aliens, if you want to know the rest you’ll have to watch the film—world domination will have to wait for 60 minutes.

Now, let’s talk about the wickedness of the movie.  Am I the only one whose mind just jumped into the gutter when Timothy overhears the circus owners discussing how they need a climax for the show and Tim yells, “You’re a climax , Dumbo!”  Here we have a film that begins with storks delivering animal babies and a train that chants “I think I can” when going up hills and steaming through tunnels, and soon thereafter we have characters screaming they need a climax. I read in the credits that Ben Sharpsteen was the director, but by this scene I thought it was a Lubitsch film!

And then there is the uber-famous “Pink Elephants on Parade” sequence—when did drunken hallucinations become a common Disney theme? 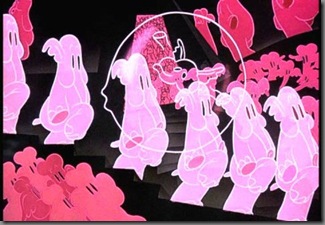 First, they have the clowns tearing into the hooch (by the way, isn’t this a stereotype?), and then they have Dumbo and Timothy inebriated and seeing dancing pink elephants!  If the film had been made 20 years later I would have sworn there was LSD in that bucket of booze. Psychedelic colors, hallucinogenic images—it was a hippie fest before there were hippies.  Oliver Wallace and Ned Washington even wrote a tripped-out song for the sequence, with lyrics like:

Look out! Look out!
They're walking around the bed
On their head
Clippety cloppety
Arrayed in braid
Pink elephants on parade
What'll I do? What'll I do?
What an unusual view!
I could stand the sight of worms
And look at microscopic germs
But Technicolor pachyderms
Is really much for me

Is this really a positive message to send to children?  Oh, but how many adults really knew (some very personally) what Disney was trying to say: recapture your youth and have a big glass of gin after you put your kid to bed!  Thankfully, I have no children, so I’ve never been asked to explain why Dumbo and Tim were blowing bubbles and seeing creepy pink elephants; yet, I wouldn’t have minded hearing such an explanation being given.

Another wicked thing about the film, at least I have been told, is the crow scene.  Some say it was racial stereotyping to have black crows singing a song that was reminiscent of a 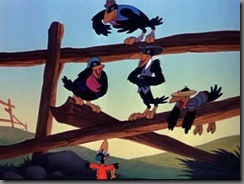 minstrel show. Granted, naming the head crow Jim Crow was not an Einstein moment, but the last time I checked most crows are black. In addition, the crows were played by African American men from the Hall Johnson choir, so I don’t know that this equates to stereotyping. Now, if they had Bing Crosby singing the track in blackface there might be an issue, but I didn’t find anything shocking about black men singing “When I See an Elephant Fly”.  As I stated above, if anyone has a grievance against Disney about stereotyping it’s the clowns! I have it on high authority that not all clowns are drunkards—just the ones my parents would hire for birthday parties were, or so my mother says.

And, finally, the last wicked thing is that magic feather. 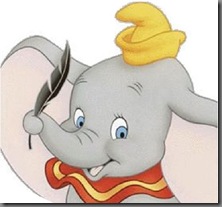 Why was it black?  Was Disney encouraging children to dabble in the black arts, “Light as a feather, stiff as a board…” Is this how this creepy slumber party “game” got its start?

Hopefully, after reading this analysis you too will give Dumbo a new viewing. Perhaps you will gain a new appreciation for the wonderful world of Disney, too.