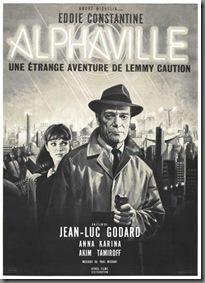 This is what happens when a director thinks he’s brilliant and people take him at his word.

French director Jean-Luc Godard is an ego-maniac who is often identified as one of the preeminent members of La Nouvelle Vague (New Wave).  Yet, unlike other stalwart members such as Claude Chabrol, Francois Truffaut, Eric Rohmer, and Jacques Demy, Godard never learned how to play well with others. As such, he destroyed a very valuable friendship with Truffaut and often found himself without financial backing for his cinematic visions.  Personally, I find it to be a universal crime that Truffaut died relatively young at the age of 52, but Godard, at 81, still continues to make films.  I’ll take a Truffaut movie over a Godard one any day. 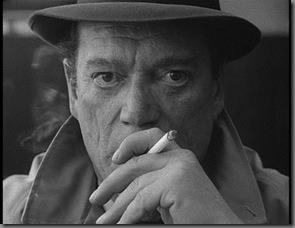 Alphaville (1965) is a satiric science-fiction noir that attempts to say something about the dehumanizing effects of modernization.  Literally transported from author Peter Cheyney’s books and countless French films,  Lemmy Caution (Eddie Constantine) is the “hero” of the picture.  A chain-smoking secret agent who sports a trenchcoat and a fedora, Godard’s Caution is nothing like the detective you would’ve seen in Cheyney’s novels or you might of watched in the earlier Lemmy Caution films.  As such, fans of both were outraged when they saw what Godard had done to their beloved character.  Gone was the optimistic strong detective; and, in his place audiences found a bitter nihilistic man who they viewed as depressing.  I’ve never read any of the novels or seen any of the earlier films, but I can attest to the fact that Caution is a downer. I never once found myself rooting for him nor did I ever see why any woman, let alone one played by Anna Karina, would be attracted to him.  In Lemmy Caution, Godard created a new type of character: the anti-anti-hero. I, for one, was not impressed.

The story is classic Godard—which means the plot is thin (to say the least) and heavily reliant on rambling, nonsensical conversations.  Caution is on an int 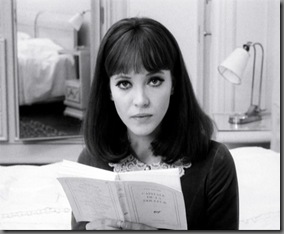 ergalactic mission (he’s from the Outlands) to find a missing agent (played by Akim Tamiroff) and the creator of Alphaville, Professor von Braun (Howard Vernon).  Once he accomplishes these things he is then supposed to destroy (by quoting poetry!) Alpha 60, a tyrannical supercomputer that has banned such words as “love” and “conscience”, and orders the executions of those who cry or show any real type of emotion.  Caution’s mission becomes somewhat complicated when he becomes fascinated with von Braun’s daughter (Karina). It sounds sane enough, but that’s because I, not Godard, wrote the plot synopsis—it’s anything but logical.

Improvisation works in certain situations (such as comedy), but I don’t think it should be recommended when attempting to make some semblance of a science fiction film.  I read once that Godard asked his assistant director, Charles Bitsch, to write a screenplay for the film after producer André Michelin demanded he have something to show to prospective German back 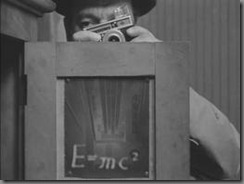 ers. Bitsch, who was quite unfamiliar with the Caution books, wrote a 30-page treatment which Godard didn’t bother to read before he passed it onto Michelin.  None of Bitsch “screenplay” ever made it to the screen and the German backers demanded their money back.  This is what it was (and still is) like to “work” with Godard.

Still, if you can look past the pretentiousness of the flashing lights and signs that are supposed to be meaningful (but just irritated me), there is one nice thing about the film: its excellent cinematography at the hands of the great Raoul Coutard.  The principal photographer of such stalwart films as Z (1969), Shoot the Piano Player (1960), and Jules et Jim (1962), Coutard knew how to capture strikingly memorable images.  I suspect the primary reason I like such Godard films as Contempt (1963) and Breathless (1960) is be

cause Coutard was the cinematographer.  The most impressive thing about Alphaville is the opening four-minute sequence of the film, where Caution enters his hotel and the camera tracks his every move from the entryway to his own hotel room. It is an unedited tracking shot that follows him through an elevator and winding corridors--a miniature version of Orson Welles’ A Touch of Evil (1958). Visually, it is a stunning picture, but everything else, in my opinion, is lacking.

And, speaking of Welles, I think he said it best in his analysis of Godard: "His gifts as a director are enormous. I just can't take him very seriously as a thinker—and and that's where we seem to differ, because he does. His message is what he cares about these days, and, like most movie messages, it could be written on the head of a pin." For someone who thinks he has so much to say about society Godard has a really poor way of conveying it.  If you, and perhaps a few others, are the only one who can decipher what you are trying to say, how useful is it really?