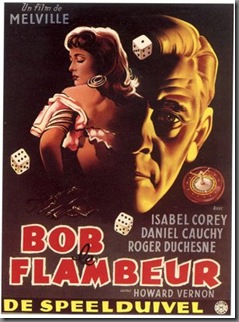 When you ask a film lover to name some of their favorite film noirs you might hear such titles as: Double Indemnity (1944), Kiss Me Deadly (1955), Laura (1944), Murder, My Sweet (1944), Out of the Past (1947), or The Maltese Falcon (1941), but you would rarely hear the name of the often overlooked Bob le Flambeur (1955). Perhaps this is due to it being a French-language film from a relatively unknown French director in Jean-Pierre Melville. Whatever may be the reason, Bob le Flambeur is a film noir that should get more attention from cinephiles—and not just the ones who recognize the name Bob le Flambeur because it was mentioned in Jean-Luc Godard’s Breathless (1960), either.

Fans of Melville know that his best films are minimalistic but stylish—think Le Samourai (1967), Le Cercle rouge (1970), and Un flic (1972, with our fave Catherine Deneuve).  A French Resistance fighter during WWII, Melville was his own man in every sense.  When he couldn’t get a job in the French film industry he started his own studio and made his own unique brand of films.  His independent style allowed him to veer away from the then-stagnant nature of French filmmaking, and employ techniques that were hugely influential to New Wave directors like Godard and Francois Truffaut.  His films relied on location shots (primarily by handheld cameras), and employed the use of jump cuts (which were a big no-no at the time). While the Cahiers du cinéma are often remembered for their reverence of such directors as Alfred Hitchcock, Fritz Lang, and Max Ophuls, Melville’s work was also viewed favorably.  He along with Jean Renoir and Jean Cocteau are perhaps the Frenchmen the Cahiers (and the subsequent French New Wave) most admired. 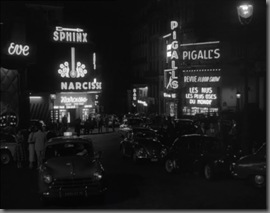 n in Montmartre (a section of Paris known for its nightclubs and bohemian culture), but scenes were also shot at a horse track in La Havre as well as in Deauville for the casino sequences. Films shot on location always seem to have a notable edge to them—perhaps this is because they side-step the artificiality of a studio set. I think this is one of the striking features of Bob le Flambeur—it adds to the overall grittiness of the picture.  When you start your film with a multi-perspective shot of a street cleaning truck circling the Montmartre rotunda and your main character driving his 1955 Plymouth Belvedere you are making a statement. In addition, the night shots of the busy streets of Montmartre do a tremendous job of exhibiting the world in which Bob Montagné (Roger Duchesne) operates. These shots are completely atmospheric and unl 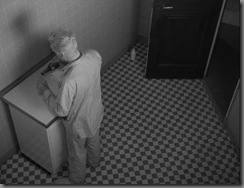 ike what most French filmmakers were doing at the time. Godard would later borrow heavily from this when he shot the nighttime scenes in Breathless, and I’m sure Eric Rohmer was also thinking of Melville when he worked on My Night at Maud’s (1969).

Still, even though the exterior shots are what most people focus on, there are a number of standout interior shots as well. My favorite one is an extreme overhead (I mean in the ceiling) shot that watches as Bob paces in his kitchen. There is an added element in this scene, because the story has voice-over narration (by Melville nonetheless) and when you watch it you feel almost voyeuristic, as though you are in collusion with the all-seeing narrator.  One of the other things I noticed about many of Melville’s interior scenes 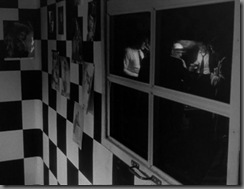 is his fascination with checks and rectangles—they inundate almost every one.  This is a subtle reference to the game of chess, and we the viewer get to watch how the game plays out for Bob.

While the innovative camerawork and set design are what make this a memorable piece of cinema, the overall story and acting is good, too.  Penned by Melville and Auguste Le Breton, the film is about a compulsive gambler (and ex-con) and his eclectic crew of associates. Dapperly dressed and graced with the manners of a gentleman, Bob is liked and admired by everyone—including the police, headed by Inspector Ledru (Guy Decomble). He’s the type of man who exudes confidence and has the ability to convince others to go along with whatever he wants to do.  Which comes in handy when he decides he wants to rob the Deauville casino. Overall, the story is crisply paced and remarkably believable.  I view it is as ironic realism—something you don’t always get with a noir or a heist film. 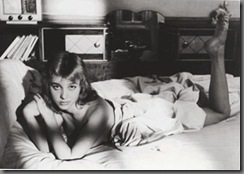 Early in his career Melville was known for casting relative unknowns—primarily because he never had enough money to pay anyone.  While both Duchesne and Daniel Cauchy (who plays Bob’s surrogate son Paolo) were established actors, Melville did launch the career of Isabelle Corey when he gave her the would-be femme fatale role of Anne in this picture. Duchesne is obviously the star of the film, but both Cauchy and Corey bring an added rawness to their roles.  Corey, in particular, stands out for how she plays her character as both opportunistic and naive.  You don’t know whether to embrace her or slap some sense into her.

There are many reasons to like Bob le Flambeur, and that’s why it’s such a shame that more people aren’t familiar with it.  If you don’t believe me, take the word of director Stanley Kubrick, who said Bob le Flambeur is the greatest crime film ever made. High praise indeed.