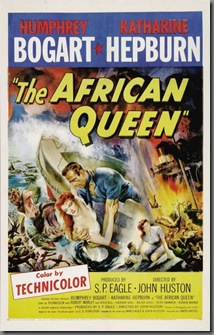 Something happened to Katharine Hepburn in the 1950s that was both a blessing and a curse: she started playing a lot of spinsters. Some of these spinsters were painful to watch (think The Rainmaker and Summertime), but thankfully her turn as Rose Sayer in The African Queen (1951) was the perfect vehicle for her maturing talents. She had adept screenwriters (James Agee and John Huston); an accomplished director (John Huston); an award-winning cinematographer (Jack Cardiff); and, an age-appropriate co-star (Humphrey Bograt)—all of these essential elements allowed Hepburn to turn Rose into the best spinster portrayal of her storied career.

Based on C.S. Forester’s 1935 novel The African Queen, 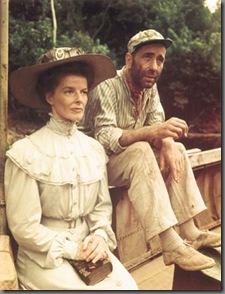 the story takes place at the beginning of WWI in 1914 in German East Africa.  An old-maid missionary (Hepburn) finds herself in a difficult situation after her Methodist minister brother (Robert Morley) is beaten by German soldiers and later dies of a fever.  Alone in the middle of the jungle, Rose is rescued by rough-looking steamboat (a very small one, named, you guessed it The African Queen) captain Charlie Allnut (Bogart), a man who delivers supplies and mail along the Ulanga River.  After learning that the boat is carrying the necessary supplies to make a torpedo, Rose attempts to convince Charlie that they should make one and then use it against a German gunboat as an act of patriotism (he’s Canadian, which at the time was still a part of the British Empire). While attempting to dissuade Rose from her suicidal plan, Charlie often finds himself at odds with the headstrong nature of his prim companion. What ensues is an adventurous love story between complete opposites in the middle of the African jungle.

Most people who have read Forester’s novel will tell you that the movie is ten times better. This is not to say that screenwriters Agee and Huston changed a lot when they 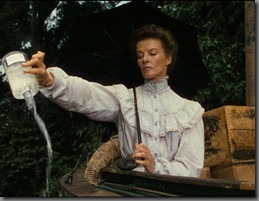 adapted the book, because they only made a few minor changes—most notably turning Charlie into a Canadian instead of a Cockney Londoner because Bogart couldn’t pull off the accent—but because the story plays better on screen than on the page.  They received an Oscar nomination for their crisp, smart dialogue and their ability to turn a somewhat turgid book into a sweeping adventure story. Writing lines for two completely opposite personalities can be challenging (you don’t want one to dominate the other too much) and that’s where I think Agee and Huston do a great job.  Perhaps my favorite exchange is this one:

Charlie: A man takes a drop too much once in a while, it's only human nature.

Rose: Nature, Mr. Allnut, is what we are put in this world to rise above.

The characters’ words never seem forced and they always sound appropriate.  I wish more screenwriters wrote dialogue like this.

John Huston also received an Oscar nomination for his direction of the film.  While he and Bogart were cut from the same cloth, dealing with Hepburn in the middle of the jungle could have been a nightmare if he hadn’t approached her in the right way. He obviously was successful in this endeavor because Hepburn later 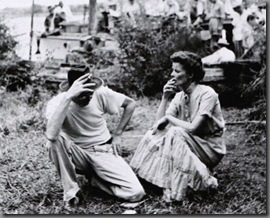 said that it was “the goddamnedest best piece of direction” she ever received.  As if dealing with two of Hollywood’s biggest stars wasn’t enough, the film was shot primarily on location in central Africa (although for safety reasons all of the scenes where Bogart and Hepburn are in the water were filmed in a studio water tank).  Just the logistics alone were bad enough, not to mention the fact that it was being filmed by huge Technicolor cameras.  Sickness ran rampant on the set and the weather conditions were unbearable at times.  In the end, it turned out to be one of the best films of Huston’s career.

Besides the off-beat love story, what is most remembered about the movie is its cinematography.  Can you really shoot a film in the middle of the African jungle in anything other than Tech 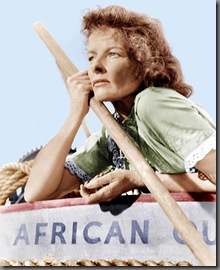 nicolor?  Vivid and lush, the color pops off the screen.  Cinematographer Jack Cardiff was known for his experimental use of Technicolor. His use of the dye-process color system made him the go-to cinematographer for the likes of Powell & Pressburger and Hitchcock.  Yet, he was also extremely adept in his lighting techniques.  There’s a story about how Bogart told Cardiff that it had taken him years to get the lines on his face and that he didn’t want Cardiff to wash them out with lights. Bogart might have kept his lines, but Hepburn never looked better in color.  Rose was supposed to be 33-years old, while Hepburn was in her mid-40s when the picture was shot; yet, I can’t recall a color film where Hepburn looked so real—her take me as I am (with limited lighting hijinks) made her look like the beauty she was.  What makes this even more impressive is that throughout most of filming Hepburn was extremely ill with dysentery—and still she looked good, which no doubt she owed to Cardiff’s mastery.

Finally, what I think makes this Hepburn’s best spinster role is that her co-star is Bogart.  Slightly seven years older than Hepburn, Bogart looked like the kind of man who could fall for an aging old maid.  Rough and grizzled, Bogart had the necessary pr 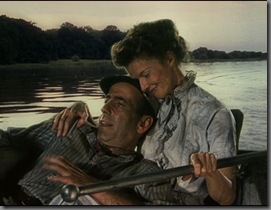 esence to stand next to a woman who could be perceived as domineering.  Perhaps this is why he won his only Academy Award for this role—he stood his own against one of the most powerful actresses to grace the silver screen.  When you compare his Charlie to the likes of Rossano Brazzi in Summertime (1955) and Burt Lancaster in The Rainmaker (1956) it’s easy to see where those films faltered while The African Queen thrived. While Hepburn received Academy Award nominations for all three of these films, this was the one she seemed the most believable in, which I believe is a direct result of who her co-star was.  I believe this is the inherent reason why The African Queen endures while Hepburn’s other spinster films are often pushed aside and/or forgotten.