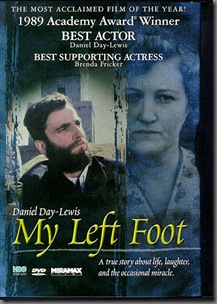 Many years ago I came to the conclusion that Daniel Day-Lewis is the best actor of his generation.  His ability to fully immerse himself in whatever role he is playing is legendary.  When watching one of his films I don’t see Day-Lewis, I see his character.  The sheer intensity of his portrayals is gripping and spellbinding—and without a doubt unmatched by any other actor today. I suspect Leonardo DiCaprio learned many things when he worked with Day-Lewis on The Gangs of New York (2002), but I think the most important was the idea that you should only do quality work.  DiCaprio took a page out of Day-Lewis’ book and stopped making one inane film after another and concentrated on pic 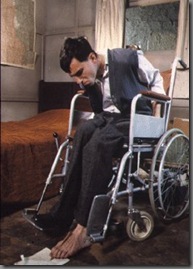 king films for which he could be proud.  Day-Lewis has made less than twenty-five feature films in his career (most highly regarded), which only goes to prove that quality is always more important than quantity.

I have a difficult time deciding which of his two Academy Award wins for Best Actor (he has been nominated four times) is the best.  His menacing portrayal of Daniel Plainview in There Will Be Blood (2007) is powerfully mesmerizing, and his turn as Irish artist and writer Christy Brown in My Left Foot (1989) is inspiring.  Of the two, Christy Brown is the embodiment of a controlled performance. Not just any actor could have played a character born with cerebral palsy and who was unable to speak clearly throughout most of the film, but Day-Lewis does it beautifully.  While Day-Lewis could never master using his left foot as Christy Brown did to write and paint (Day-Lewis used his right foot instead and the scenes were shot through a mirror), he nailed the body rigidness and facial expressions. Although the performance is completely controlled, it also appears natural and believable. 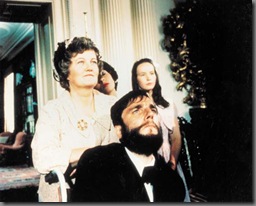 Of course, Day-Lewis (and the film) greatly benefitted from working with two accomplished actresses. Brenda Fricker won a Best Supporting Actress Oscar for her role as Christy’s devoted mother, Bridget Brown.  The real Mrs. Brown gave birth twenty-one times (ah, to be an Irish Catholic!), so she was an often harried woman but she did as much for Christy as possible.  Fricker does a nice job of showcasing Mrs. Brown’s resilient nature and her unabashed love for her special son. She and Day-Lewis really do a sensational job of exposing just how deep and abiding their two characters love and respect one another.

Oddly enough, Fiona Shaw is often overlooked in My Left Foot, which is a shame because this is one of her better film roles (she is primarily known 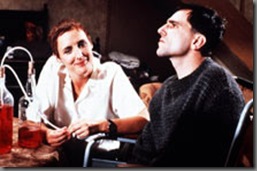 for her stage work).  She doesn’t have as much screen time as one might like, but she makes her character, Dr. Eileen Cole, memorable in her few scenes.  Dr. Cole plays a much more significant role in the book than the film, but I think that screenwriter and director Jim Sheridan wanted to focus more on the mother-son relationship than that of the patient-doctor one. Still, Shaw does get to shine in her brief appearances; one of which is in the memorable restaurant tantrum scene.

Besides the overall fine acting, the film itself is inspirational.  To watch a young boy (played beautifully by Hugh O’Connor) struggle with an almost paralyzing disease struggle to matter in the world is life-affirming.  Here we have a boy who everyone thinks is mentally handicapped but who is really a brilliant individual—his determination to persevere and be 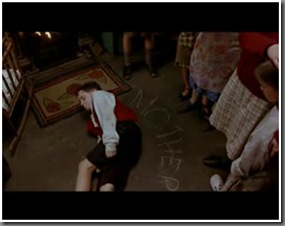 recognized by both his family and society is beyond admirable.  When he first writes “Mother” on the family floor and his entire family realizes he’s not “retarded” you get a little catch in your throat.  When you watch him descend into despair (and alcoholism) as a young man when he realizes that romantic love is beyond his reach (at least until the end of the film), you feel truly sorry for him.  And, seeing him learn how to control his impaired speech by reciting Hamlet’s soliloquy “To Be Or not To Be” is a testament to the human spirit. I think most people enjoy films about overcoming obstacles and the fact that this is a true story only makes it even more compelling.