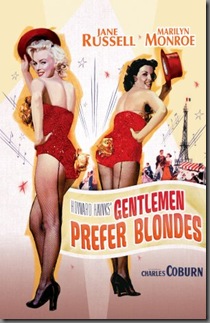 Based on the 1925 Anita Loos novel, Gentlemen Prefer Blondes: The Illuminating Diary of a Professional Lady, and the 1949 stage musical starring Carol Channing (really!), this Howard Hawks directed film is as raunchy as a musical could possibly be in 1953. Start with the risqué costu 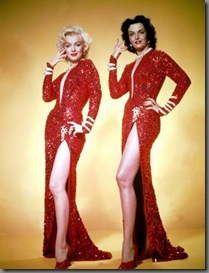 mes, then gasp at the double-entendre laced dialogue, and finally delight in the outrageous song lyrics and choreography—it’s a cornucopia of hysterical crassness.

Long before actresses were expected to weigh 95 lbs. women actually had curves in the movies.  Voluptuous is the best word to describe Jane Russell and Marilyn Monroe—they had curves in all the right places.  Costume designer Travilla (read Christian Esquevin's article) did a spectacular job of showcasing the assets of his leading ladies.  From the very first scene, where the ladies sing “Just Two Little Girls from Little Rock” wearing red sequin gowns with slits up to the hinterlands and suicidal plunging necklines, you know this is a film about sex.  Even when they aren’t wearing their showgirl outfits their clothes are form-fitting and sexy.  Of course, the most iconic outfit is the dress that Monroe wears when she performs “Diamonds Are a Girl’s Best Friend.” Often imitated (think Madonna) but never surpassed, Monroe looks sensational—and like she’s eaten a few meals in her life.  Perhaps I shouldn’t say this, but I have often wondered if this dress was a metaphor for the female vagina (please cover the children’s eyes).  O’Keefe had her orchids, maybe Travilla had his pink silk gown with a huge bow on Monroe’s derriere?  Anyway, the first thing I think about whenever I see this movie is that all of the costumes are absolutely fabulous. 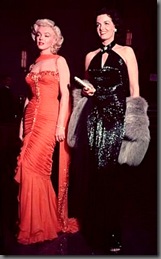 lei’s man gets cold feet after his father threatens to cut him off, the ladies head off on a luxury liner to France. Along the way they meet the U.S. men’s Olympic team, a diamond mine owner (Charles Coburn), and a private detective (Elliott Reid).  When Lorelei gets caught with her hand in the jewelry box the girls find themselves down and out in Paris, and they have to begin performing again as showgirls.

One of the best lines comes at the beginning of the film when one guys asks: “Say, suppose the ship hits an iceberg and sinks. Which one of them do you save from drowning?” and another guys answers, “Those girls couldn't drown.” Russell gets most of the best lines—she is playing opposite Monroe’s rather vapid character—but Monroe gets some zingers in too, such as when she responds to one of the Olympians who says he’s the only 4-letter man on the team with, “You should be ashamed to admit it.” No one played stupid as well as Monroe, and Russell always shined as a straight-shooting woman.

So we have gorgeous costumes and witty dialogue and then we pair those two together with great musical numbers and we have a really good film.  Two songwriting teams (Leo Robin/Jule Styne and Hoagy Carmichael/Harold Adamson) were responsible for such memorable songs as: “Diamonds Are a Girl’s Best Friend”, “A Little Girl from Little Rock”, “When Love Goes Wrong”, and “Anyone Here for Love?”.  Of course, my favorite Monroe number is “Diamonds”.  The song itself is catchy:

A kiss may be grand, but it won't pay the rental on your humble flat.

Or help you at the automat.

Men grow cold as girls grow old, and we all lose our charm in the end.

But square-cut or pear-shaped, these rocks won't lost their shape.

Diamonds are a girl's best friend. 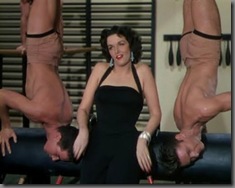 When you combine the set design and the choreography with such memorable lyrics it becomes musical magic.  While it is often overshadowed by Monroe’s “Diamonds” number, I find Russell’s “Anyone Here for Love?” production with the Olympic team highly entertaining.  The song is bawdy and Russell’s strutting amongst the inattentive athletes is overtly sexual, with such lyrics as:

But I'm no physical culture fan

Ain't there anyone here for love, sweet love 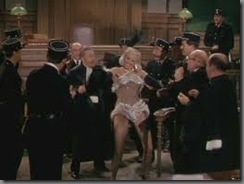 Each song seems to be perfectly matched to the woman performing it.  As an extra treat, of course, we get to see Russell parody Monroe’s “Diamonds” number when she takes her place in court.

Hollywood made some outstanding musicals in the 1950s (Singin’ in the Rain and Seven Brides for Seven Brothers being the finest), and I think Gentlemen Prefer Blondes falls into this group.  Which is strange, because I also think that it is an often overlooked musical gem.  People will always remember the “Diamonds” number, but I think that the overall film deserves more respect than it gets.