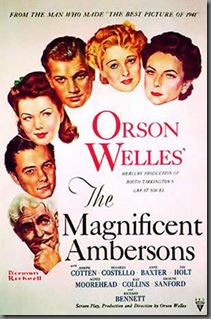 (For a detailed examination of the now infamous saga of the making of this film please visit Jim Lane's Cinedrome—it is a long read but highly educational and entertaining.)

If you enjoyed the Pulitzer Prize winning novel The Magnificent Ambersons by Booth Tarkington you will be disappointed with the 1942 film version.  There, I got that out of the way right off the bat.  Dense and at times verbose, 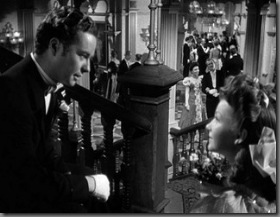 the novel is a nostalgic look at the end of the Nineteenth Century.  We read about a world on the cusp of urban sprawl and the advent of something called the horseless carriage (today we refer to it as the automobile).  One family, the Ambersons/Minafers, represents the antiquated Nineteenth Century viewpoint; while another family, the Morgans, symbolize the forward-looking progressiveness of the Twentieth Century. I can’t really fault Orson Welles’ adapted screenplay for falling short—the book is over 700 pages, so it was a monumental task—but I can’t deny that there is a big disconnect between the film and the novel.  Who knows, perhaps it was the absolute ludicrous happy ending that was tacked on at the film’s conclusion that makes me uncomfortable.  I suspect this is one of the many reasons so many people revere Gone with the Wind (1939)—it stays true to the book’s ending.  Nevertheless, while I’m not a huge fan of The Magnificent Ambersons narrative, I do believe the overall production has many things to admire. 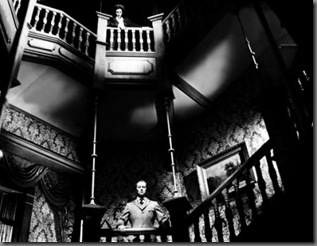 The set designs, particularly the ones at the Amberson mansion, are spectacular. Rightly nominated for an Academy Award for Best Art Direction, the mansion set was constructed like a real house, where walls could be manipulated in such a way so that a camera could appear to seamlessly pass through them in one continuous take. The now famous ballroom sequence showcases the artistic brilliance of both the set designers’ and Welles’ virtuosity.  Employing his love of deep focus and high angles, Welles (along with his Oscar nominated cinematographer Stanley Cortez) did something unheard of in 1942—he attempted to capture one continuous scene for several minutes without a cut/edit.  Later filmmakers, such as Luchino Visconti and Alexander Sokurov would pay homage to Welles with their respective films The Leopard (1963) and Russian Ark (2002). In addition to the ballroom scene, there are countless ingenious shots captured on the mansion’s multi-tiered staircases and long hallways.  While Welles could never make up completely for the the film’s narrative deficiencies, his visual artistry is still a marvel to watch.

One of the many reasons The Magnificent Ambersons fails to completely deliver a rewarding cinematic experience is that there aren’t any likable characters (sans, perhaps, Lucy).  In the book, you root for Isabel (Dolores Costello) and Eugene (Joseph Cotton) and feel somewhat sorry for Lucy (Anne Baxter) and Fanny (Agnes Moorehead).  In the movie you find yourself searching for chemistry between Isabel and Eugene and yo 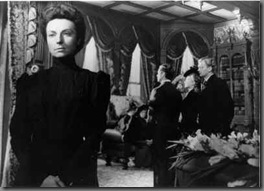 u absolutely detest Fanny and George—of course, this is the one thing that Welles got right: George Minafer (Tim Holt) was an unlikable character in both the novel and in the film.  At least in the book he gets his true comeuppance, whereas in the film he is given a most undeserved happy ending.  Still, the strange maliciousness that Welles’ instills in Moorehead’s Fanny is hard to reconcile with how the character is portrayed in the novel, which is more pathetic than anything.  Somehow Moorehead received an Oscar nomination for Best Supporting Actress, but I can’t say why, except that she makes the viewer thoroughly loathe her character. Overall, most of the actors look like they are sleepwalking through the film.

Perhaps I’m being a bit harsh when it comes to the acting. What actor could be viewed as at the top of their game when more than an hour of the original film was edited out and additional scenes were inserted and tacked on to pull everything together?  It also doesn’t 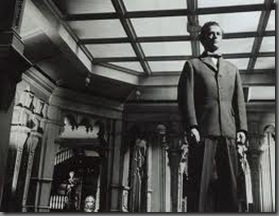 help that the actors found themselves shot in what can only be described as uneven lighting.  It is obvious what shots Welles and Cortez are responsible for and what scenes were reshoots helmed by stand-in director Robert Wise.  There is a subtle way to use light and shadow and then there is an overbearing (but still flat) way of using these devices.  There are several scenes where you just ask yourself why is the picture shot in such dark tones—are they trying to cover something up?

Overall, The Magnificent Ambersons is a study in conflicting styles.  Its would-be greatness is dramatically diminished by haphazard editing—you just can’t cut 131 minutes down to 88 minutes and expect it to work.  Still, there are glimmers of cinematic brilliance in the production design, and these alone save the film from complete infamy.