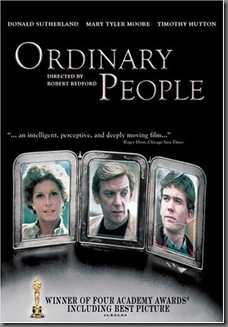 Ordinary People (1980) was nominated for six Academy Awards; it won four. To this day, some people are still upset over the fact that Ordinary People won the Best Picture Oscar over Raging Bull (1980).  These same individuals will also debate you to death about how ridiculous it was that the film’s first-time director, Robert Redford, beat out Martin Scorsese as Best Director.  While I find Raging Bull mildly better than Ordinary People, I can’t bring myself to say that Scorsese’s film was robbed, either.  Each had its strengths; it just so happens that voters that year went for an understated drama over a powerful one.  Of course, there is one true issue to be had with the 1980 Academy Awards—how could Timothy Hutton be nominated (and win) Best Supporting Actor for a film in which he was without a doubt the primary lead?  That, to me at least, is the biggest head scratcher. 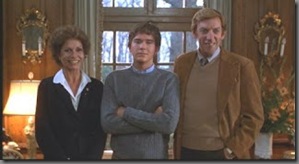 Based on the 1976 novel of the same name by Judith Guest, the film tells the story of an upper-class Midwestern family’s gradual destruction following the death of a child.  Hutton plays Conrad Jarrett, a teenager dealing with survivor’s guilt.  Conrad is plagued with flashbacks of the horrible night in which he and his brother Buck (Scott Doebler), were involved in a sailing accident in which Buck drowned.  Having just been released from a mental hospital after attempting to slit his wrists, Conrad struggles to deal with his depression and his mother’s (Mary Tyler Moore) indifference.  The very shaky glue that attempts to bind mother and son is Conrad’s father, Calvin (Donald Sutherland).  The Oscar winning screenplay focuses on what happens when polite appearances are shattered by callous truths.  Of course, no one in the family is willing to admit w 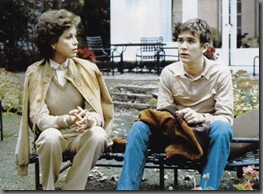 hat those harsh truths are, and so it takes a good psychiatrist (Oscar-nominated Judd Hirsh) to bring the Jarrett men to the conclusion that not everything is neat and easy.

Mary Tyler Moore was a complete revelation as Beth Jarrett. Primarily known as a comedic actress, who emitted warmth and enthusiasm in her famous sitcom roles, Moore plays a cold, unfeeling woman in this film.  Beth is always perfect—her hair, clothes, and house are always immaculate.  Yet, she has a dirty little secret: she despises weakness, especially if it involves emotions.  Her interactions with a son who is obviously begging for her love and compassion are almost too brutal to watch.  Mind you,

she is not evil or malicious—she just refuses to connect with him.  The most painful scene in the entire film is when after having an emotional breakthrough of his own Conrad hugs her and she stiffly sits with a frozen look on her face. Moore was nominated for a Best Actress Oscar and she deserved it.  She makes you want to scream at the screen, “Wrap your arms around him you cold-hearted bitch!” Her scenes with Sutherland are just as powerful, especially the final one in which he tells her the truth about who she really is.

Hutton, for his part, gives an understated performance that is propped up by fine supporting turns by Sutherland and Hirsch. Like Moore, Hirsch was known primarily as a sitcom actor, and so his Dr. Berger’s crass language and matter-of-fact demeanor was a surprise to many.  Still a teenager himself, Hutton had to run the emotional gamut in this role: remorse, guilt, despair, love, fear, and happiness.  As I said 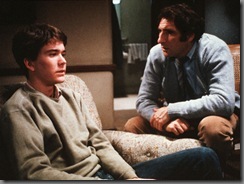 earlier, he was the star of Ordinary People and to label him as a supporting actor was completely ridiculous.  And, Sutherland, does an admirable job of playing a man struggling to keep what’s left of his family together.

Other than the gripping story and the fine acting, what most people remember about the film is its music, specifically the constant presence of Pachelbel’s Canon.  Baroque in style and so composed in such a way as to produce dramatic emotions, the Canon was an interesting choice of thematic music for Ordinary People. For those unfamiliar with it, the Canon employs three voices (or players) that engage in the same music (this is a canon in music) but then there is also a fourth voice (the bass) that plays an independent part.  Right about now you’re asking yourself what is the point of this 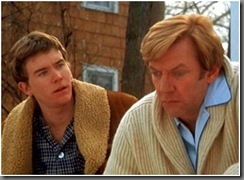 music lesson, right?  Well, I believe the choice of the Canon has symbolic meaning in that Conrad, Beth, and Calvin play the canon voices, while Buck (or perhaps Dr. Berger) plays the bass voice. Still, whether there was symbolism behind its choice or not, the Canon is expertly used throughout the film.

Overall, Ordinary People is a gut-wrenching family drama that examines the meaning of both guilt and disconnectedness.  For anyone who may have had a less than warm relationship with a parent or struggled with survivor’s guilt, it might provide some insight into the human condition.  While it may not be as emotionally packed as Raging Bull, it quietly makes a statement about the meaning of loss.