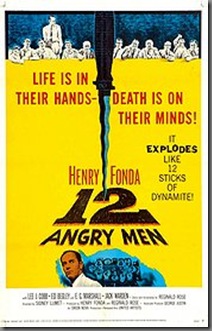 In director Sidney Lumet’s first feature film, 12 Angry Men (1957), one juror asks another, “What kind of man are you? Who tells you that you have the right like this to play with a man's life?” The duty of a juror is to judge the evidence presented without prejudice or sympathy and render a verdict. The problem is every person who sits in a jury box has their own personal views regarding race, class, and gender, as well as their own personal problems. Reginald Rose’s Oscar-nominated screenplay (adapted from his stage play) does an excellent job of showcasing these very issues 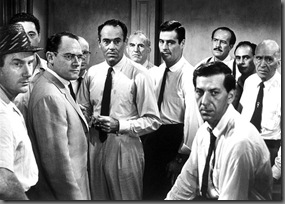 in this taut, dramatic film.  Aided by brilliant cinematography, outstanding editing, and stellar acting, 12 Angry Men is an inspiring look at one of the most disliked and avoided duties of American citizenship.

Our jury is deliberating a first-degree murder charge involving an 18-year-old minority boy from the slums who is accused of stabbing his father to death.  If convicted, the mandatory sentence is the death penalty.  On the surface, it appears to be an open and shut case of guilt, but one juror, played by Henry Fonda, has doubts.  As the lone holdout, he takes it upon himself to make the other eleven jurors (all men, hence the title) reluctantly (and in some cases belligerently) reexamine the evidence.  Along the way we learn there are other contributing reasons for why they think the boy is guilty: racial and class prejudice, familial issues, and indifference.  It is a searing analysis of what actually influences jurors to make the judgments that they do. 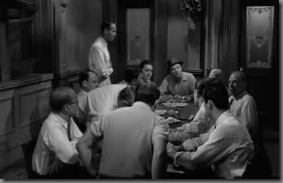 While I have a particular issue with the fact that all of the jurors are men (women could vote and thus serve on juries in 1957!), that does not damper my appreciation for how Lumet and cinematographer Boris Kaufman shot the film.  I’m not sure whether they chose to use black and white film to accentuate the viewpoints of the jurors (everything is seen as either black or white) or because it was cheaper, but it works. The beginning of the film is shot with wide-angle lenses and at an above eye-level perspective. This cleverly depicts how distant the jurors are from one another on many levels.  It also provides the viewer with the ability to observe the idiosyncrasies of each juror.  As the story progresses and becomes heated a 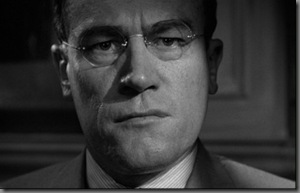 s jurors start changing their verdicts, the film is shot from much lower angles and closer shots.  These techniques heighten the drama and create an almost claustrophobic atmosphere.

With over 365 camera sets-ups and multiple angle shots, it is obvious that cinematography played a vital role in the overall production, but without clear, decisive editing it would have been useless. Having worked for several years on dramatic productions for television, Lumet knew the value of editing, and he and Carl Lerner expertly and concisely cut 12 Angry Men to create a smooth, cohesive feel.  While there are a lot of panning shots, the film is appropriately cut at crucial moments. 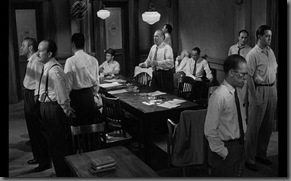 All twelve actors give fine performances, but three stand out to me. Fonda is obviously the star, and he plays his calm, rational Juror No. 8 well, but he serves more as a moral compass than anything else.  I’ve seen him play this part before in The Ox-Bow Incident (1943) and Young Mr. Lincoln (1939), so while he’s good here it’s not what I consider one of his standout performances.  No, when I think of the jurors I remember Ed Begley (Juror No. 10), Lee J. Cobb (Juror No. 3), and George Voskovec (Juror No. 11).  Begley plays his rude, bigoted part with just the right amount of anger and callowness.  By the end of the film, when almost every man turns their back on his poisonous prejudice, he does an excellent job of conveying his character’s resigned realization that no one respects him or his views.  Cobb’s 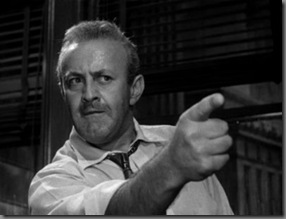 Juror No. 3 is violently vitriolic and difficult to forget. His vehement agitation serves as the actual pulse of the movie.  And, finally, I think Voskovec’s turn as a naturalized citizen with an appreciation for the American justice system deserves to be recognized.  His dealings with both Cobb and Begley are memorable, but it is his confrontation with Jack Warden’s Juror No. 7 that hammers home the importance of the jury system.

Overall, 12 Angry Men is an intelligent look at an important element of the American justice system.  It benefits from creative cinematography and editing, and has an outstanding cast.  It is a tad overdramatic at times, but that does not lessen its overall effect.