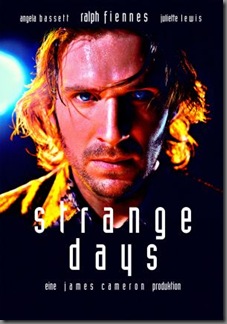 Loud, obnoxious, and inexplicably unbelievable is how I would define director Kathryn Bigelow’s Strange Days (1995). I’ll admit that I dislike most science fiction movies, so I already had a proverbial chip on my shoulder when I watched this. Plus, this is one of those Y2K films that forecasts the world on the brink of anarchy as the new millennium approaches, and since I know that was all much ado about nothing it irks me even more.  Now, I’m not saying it’s unwatchable, because it’s not horrible, I just don’t think it’s very good, either. I’m obviously not the only person who viewed it as such, since this James Cameron $42-million production was a huge box office disaster.  Over the years it has developed a cult following, but so has Pink Flamingos (1972), so 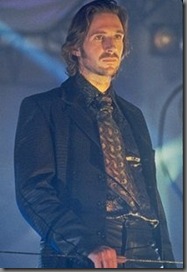 that’s nothing to brag about in my opinion.

The beyond handsome Ralph Fiennes plays Lenny Nero, an ex-L.A.P.D. cop who has morphed into a complete sleazeball who sells bootleg recordings for something called a SQUID (Superconducting Quantum Interference Device). Basically this device allows the wearer to record whatever they see. These recordings are then sold to virtual reality addicts. While some of these images are benign, most of them are for adrenaline junkies, perverts, and/or budding psychos.  When Lenny comes into possession of a Blackjack recording (what we call a snuff film) of a woman being raped and killed he finds himself embroiled in a web of corruption and multiple murders.  Things are only exacerbated by the fact that his slutty ex-girlfriend, Faith (played by Juliette Lewis),  is at the center of the whole sordid mess.

Where to start?  T 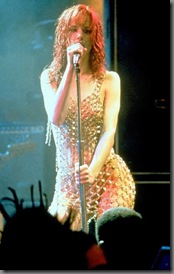 he story is just too bizarre for me.  For some reason Lenny is obsessed with the whorish Faith. Juliette Lewis spends the entire film scantily (if that) clad in what can only be described as Fredrick’s of Hollywood couture.  Her character is a punk rock singer who likes to do covers of PJ Harvey songs. Lewis does her own singing, and while her voice isn’t bad, the songs (to me) are.  Anyway, Faith obviously has a thing for sleazy men, as her current one, Philo (Michael Wincott), is a sadistic freak (he is also her manager).  Because he can’t have Faith, Lenny watches old recordings of them having sex to compensate.  Can anyone say yuck…oh, and pathetic, too!  In what world would a man who looks like Fiennes need to be pining over a former heroin-addicted prostitute?  This is one of the biggest reasons I couldn’t get behind this story—why would anyone want to risk their life to save such an unlikable character?

Then there’s Angela Bassett as Mace—Lenny’s ass-kicking, limo-driving friend.  It’s obvious she has a thing for Lenny, but for the life of me (be 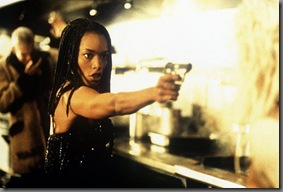 sides his hotness) I can’t figure out why.  There is some unexplained backstory about how they came to know one another, but other than this I don’t know why they would be friends.  It’s apparent she’s actually a decent human being—why would she want to be friends with someone as despicable as Lenny?  Well, she does, and so she joins him on his quest to save Faith from Philo and the mystery murderer.  I like Bassett, but her character here is one of those I want to help the man that I love besides my better judgment women that I always find myself despising.  As such, I dislike all of the female characters in this flick.

There’s so much tech-speak about the SQUID that it is really difficult to keep everything straight. Yes, like most sci-fi films they do quick, passing explanations of what the hell they are referring to—this is another convenient role that Mace plays since she is a strict 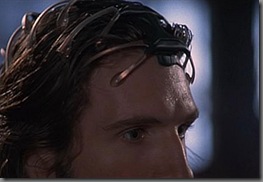 non-user of the device she has to have tutorials (just like the viewer) as each new thing about this virtual reality world is introduced—but it just sounded like sci-fi geek stuff to me and I found myself not caring what did what.  Since James Cameron, along with Jay Cocks, wrote the screenplay I guess I shouldn’t be surprised there is a heavy reliance on gadgetry, but that doesn’t mitigate the fact that I felt bogged down with information overload.

And, the ending: it was so trite.  Was I supposed to be surprised about who the killer was?  I wasn’t.  It was beyond clichéd. Oh, and the whole allusion to the Rodney King police brutality incident was just so over the top for me.  I know the film was made in 1995 and America was in the throes of the OJ Simpson

murder case and the entire country was led to believe the LAPD was full of rogue racist cops, but sometimes a director should take a step back and look at the message they are sending to their audience.

One of the main reasons I couldn’t enjoy this film was how loud it was.  Punk rock just isn’t something I find enjoyable to listen to, and when it was unnecessarily amplified in what seemed like every scene I found myself reaching for the Aleve. I’m sure Bigelow and Cameron used it to create an atmosphere of anarchy, but it just gave me a headache.

At the end of Strange Days I just couldn’t find anything I liked about it (other than Fiennes’ hotness).  All of the characters were either reprehensible or annoyingly flawed; the story was bogged down in tech-jargon; and, everything just came off too loud.  Yes, the film has a lot of style, but, to me, it lacks substance.