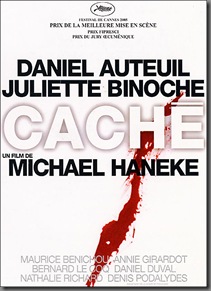 (While I try to avoid including too many spoilers, I have to discuss a big one in the following post.)

There is absolutely no music in Hidden (Caché) (2005). I don’t know why this is a big deal to me, but it is.  I suspect the slow, deliberate style of director Michael Haneke seemed even more drawn out than usual to me because this film literally lacked rhythm. I’m a fan of cerebral dramas, but sometimes directors just take things one step too far intellectually even for me.  Haneke h 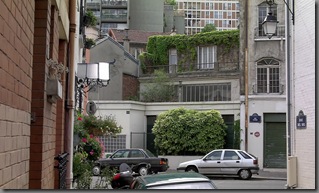 as said that his films are “polemical statements against the American ‘barrel down' cinema and its disempowerment of the spectator—they are an appeal for a cinema of insistent questions instead of false answers.” He has illustrated this cinematic philosophy in such other films as Funny Games (1997), The Piano Teacher (2001), and The White Ribbon (2010).  If you have seen those films (along with the one being reviewed here), then you know what I do: Haneke makes movies that are uncomfortable to watch.  His films are filled with mentally unstable people who do extremely irrational things in very calm manners.  As such, he presents cinema that is jarring and exhausting to watch.

Caché is a French film that will make you ask a lot of unanswered questions. The first few minutes of the movie are a static long shot of a quiet suburban street in Paris. This is followed by the screen turning into a fast-forwarded VHS tape with an unseen couple discussing why they are watching a recording 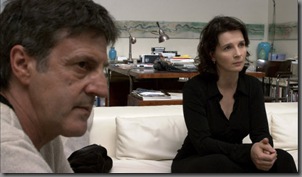 of the front-side of their home.  Soon we are introduced to Georges (Daniel Auteuil) and Anne Laurent (Juliette Binoche), a married couple who start to receive strange tapes, drawings, and phone calls from a creepy anonymous source.  Not long after this it is revealed that a sordid incident from Georges’ adolescence may be connected to these events. When he confronts the person he thinks may be responsible (Maurice Bénichou), things begin to slowly-spiral out of control.

Okay, I can’t give this movie a poor rating because the dialogue and acting are superb. Other than the fact that Binoche is dressed like some Bohemian bag-lady in many of her scenes, there isn’t much that irks me about the characters or how they communicate with one another.  Yes, it is strange how calm they remain when horrible things happen, but I can overlook this because, well, they are French and lets face it, the French have a strange jena se qua.  Yet, there is just something I don’t like (other than the lack of music) about Caché: I 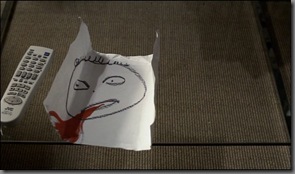 had too many unanswered questions at the end of it.  (Spoiler alert) After being totally shocked upright out of my seat by Majid (Bénichou) slitting his own throat, I thought I had a clear understanding of what had taken place and who was responsible for what.  Then his son (Walid Afkir) showed up and all of my understanding slowly dissipated.  To make matters worse, the film ended in the most idiotic fashion, with yet another static long shot of the front of a school, and that’s it.  Will there be a sequel? I certainly hope not.

While it may have won all sorts of awards and earned the praise of many critics, Caché is not what I would classify as must-see cinema.  It just really pissed me off—but not in such a way that I loathed it and wanted to write hate-mail to Haneke.  Now that I’ve seen most of Haneke’s oeuvre, I think I know what to expect from him.  His work makes me uncomfortable and I am forced to think about it after the credits roll—I’m sure that is his intention.