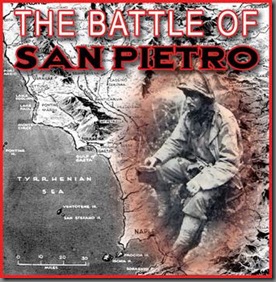 The Germans weren’t the only country that made propaganda films during World War II—the United States enlisted top-tier directors like John Huston and Frank Capra to shore up troop morale and to keep the homefront abreast of what was happening in the European Theater, too.  Of course, there was a very significant difference between Joseph Goebbels and John Huston: Huston had a conscience.  It was his understanding of right and wrong that shaped how he composed what is considered the greatest war documentary ever made, The Battle of San Pietro (1945). 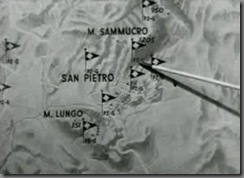 San Pietro is an Italian town located in a flat corridor surrounded by mountains near the Mignano Gap, which leads to the Liri Valley, which at that time was the road to Rome. As Allied Forces made their jump from Northern Africa to Sicily and then the Italian mainland in September 1943, retreating German forces began building parallel defensive points to the south of Rome, which they called the Winter Line.  Unfortunately for San Pietro it was in a strategically important location to the Germans, who built overlooking pillbox fortifications and mined the surrounding hillsides. By December 1943, after a month of fighting, the Germans were holding on for dear life against the Allied offensive.  It was the Battle of San Pietro, which lasted for ten brutal days in early December and cost the 143rd Regiment of the U.S. Army over a thousand soldiers, that led the Germans to retreat further north and set up what would later become the pivotal Battle of Monte Cassino in 1944.

What makes The Battle of San Pietro so memorable is its gritty realism. Cameramen Jules Buck and his crew filmed right beside the 143rd Regiment a 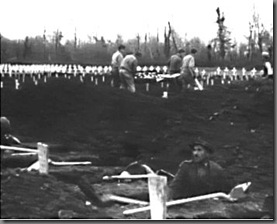 s heavy artillery and machine gun fire reigned down on them from overlooking German fortifications. Today people talk about how realistic the battle scenes in Saving Private Ryan (1998) are—well, you don’t get more real than the filming of an actual prolonged assault.  Chaotic in nature and unflinching in the reality of what takes place on the field of battle, this is a testament to the true nature of warfare. There are shots of dead soldiers and rows upon rows of makeshift graves, as well as aerial shots of the completely destroyed town itself.

While the film was held back from general population until after the war in Europe ended in May 1945, it was used as a training film for the army.  General George Marshall said it was the type of film that would make soldiers take their training more seriously—I would hope so!  The finished product that was shown to the American people was narrated by Huston himself and exalted the courage and tenacity of the 143rd Regiment.  It also had a bit of an anti-war feel to it, 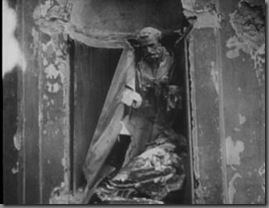 which brought Huston some criticism from the Army.  To me, this is the least offensive thing about the documentary.

What I find more disturbing about this documentary is the overtly religious music and imagery that Huston uses.  There is no sanctity in war and it always bothers me when anyone attempts to say that God favors one country over another in acts of death and destruction.  When you end a film by saying that the children of San Pietro will wake up tomorrow and it will be as though the bad things never happened, and then you show an image of Saint Peter, I think you may have overstepped just a tad.  Ah, but isn’t that why war propaganda films are made in the first place?