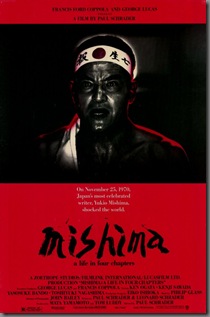 On the morning of November 25, 1970, Yukio Mishima (Ken Ogata) was recognized as Japan’s greatest modern writer. By the end of the day he was viewed as a narcissistic madman, after he and four cadets from his own private army took the general of the 32nd Garrison of the Japanese Armed Forces hostage and then asked that the army join him in  bringing the Emperor back to power. When his request was 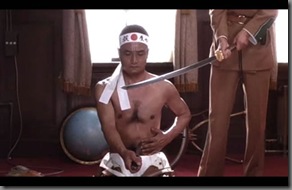 impolitely turned down he proceeded to commit seppuku (a ritualistic form of self-disembowelment), and then he and his trusted lieutenant, Morita, were beheaded by one of the other cadets.  This act of rebellion came as a shock to the Japanese people, but it shouldn’t have, as Mishima’s novels had been filled with such plots as this one for several years.

Mishima: A Life in Four Chapters (1985) depicts this bizarre real-life drama by not only showing the day of rebellion itself but by also focusing on four chapters (and three of the author’s fictional stories) in Mishima’s life: (1) Beauty, (2) Art, (3) Action, and (4) Harmony of Pen and Sword.  As each chapter is unfurled the viewer comes to understand Mishima’s almost pathological desire to unite art with the samurai mentality (i.e. harmony of the pen and sword). Supported by the deep pockets of executive producers Francis Ford Coppola and George Lukas, director Paul Schrader helmed a highly stylized film that is told in several tenses: present, flashback and literary, with 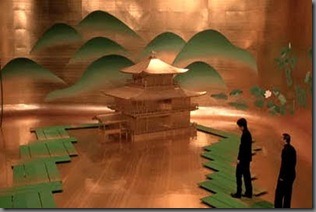 each time frame represented by its own color palette. Elko Ishioka’s masterfully designed sets are the star of the film.  Beautifully photographed by John Bailey and set to a powerful musical score by famed composer Philip Glass, Mishima is a visually stunning art film with a generous budget.

The color composition is what stands out about this movie. When shooting in the present Schrader chose to use a very flat color base, primarily in dreary browns with heavy lighting.  This created an atmosphere of unease for the chaos that Mishima was about to release. Flashbacks of what led Mishima to make his fateful decision are shot in reflective black and white, and are always accompanied by voice-over narration from Ogata. It is when the story delves into the literary elements of Mishima’s fictional writings that the movie pops off the screen.  Three stories are interwoven into the real-life drama: The Temple of the Golden Pavilion (1956), Kyoko’s House (1959), and Runaway Horses (1969). All are designed as stage plays and end in the suicide/death of the male protagonist. 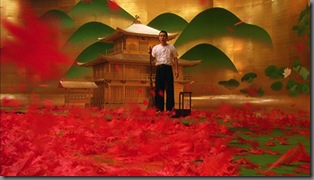 The Temple of the Golden Pavilion is shot, not surprisingly, in golds and greens.  It is the story of a stuttering, homosexual Zen acolyte who is tormented by the power of beauty, which is embodied by the temple itself.  When you first see this section of the film it takes a few minutes to realize that this isn’t part of the real-life story.  It can be jarring to see the theatrical set design with its creative use of scale and scene backdrops, but once you adjust to it you begin to appreciate the creativity that went into designing it.

The second chapter, Kyoko’s House, is effeminate in nature and relies he 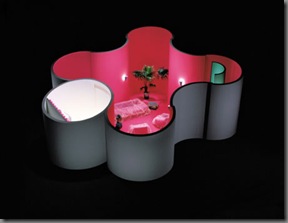 avily on pinks, reds, and grays. It is a contemplation on the idea of the human body as the highest art form. It is decided that the body must be destroyed at the height of its beauty. In addition, there is a need to reconcile the duality of male and female for Mishima’s surrogate in this story.  This is perhaps the most disturbing of the four chapters in the movie, primarily because there is a sadomasochistic element running throughout.

While it might not be as colorful as the two previous chapters, Runaway Horses is the most visually striking of the three stories.  The lighting is much darker here, and the color tone is primarily in orange, brown and black.  In it, a young man decides to lead a revolt against those who support capitalism 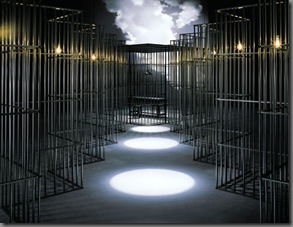 and he wants to bring the Emperor back to power (perhaps the most foreshadowing of the chapters).  Two set designs stand out to me: the house of cards (really cubicle panels) which fall down upon the conspirators and the endless open jail cells that follows this scene.  Images like these have a way of implanting themselves in your subconscious.

The story itself can be difficult to follow if you don’t pay close attention. It’s in Japanese, so while you’re looking at the amazing set designs and hearing Glass’ pounding score in the background, you also have to focus on reading the subtitles.  As such, I think this film takes at least two viewings to fully appreciate and understand.  The non-linear narrative can be off-putting to some, but I don’t think that it is too disjointed for someone to figure out when and what is happening.

Overall, Mishima: A Life in Four Chapters is an art-house movie that is actually enjoyable to watch.  Yes, you have to do a little bit of work, but it does not require much heavy lifting.