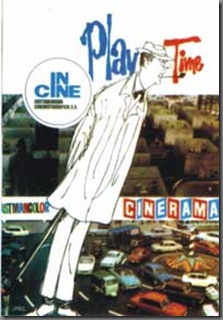 You suck, Jacques Tati! I’ve seen three of your films and they all blew. Francois Truffaut wrote that your Playtime (1967) was a “film that comes from another planet, where they make films differently.” I expect he meant that as some sort of compliment—to me it means that somewhere in the galaxy there is a planet full of films I would never want to watch.  I’m glad you went bankrupt after this ₣17-million fiasco, and I’m especially pleased that the man who constantly criticized modernization had to do an advertisement for 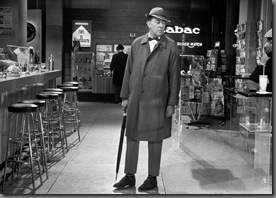 For a man who said he grew to dislike playing his signature character, Monsieur Hulot, you sure went to the well a lot.  Many people find the pipe-smoking Hulot lovingly innocent and likable.  He just annoys me.  Just how many people in the French army did this man meet? And, how many after meeting him would be so pleased to run into him years later on the street and offer him a job or to buy him a drink, etc.?  Even worse, he spawned an evil doppelganger in England with the creation of Mr. Bean!  Yo 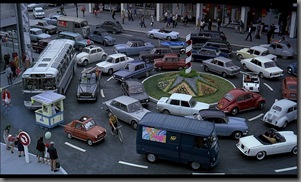 u suck Jacques Tati, and so does M. Hulot!

I’d discuss what Playtime is about, but that would require a plot.  Your Hulot is back in Paris and he is still bewildered by modernization.  Everything is cold and sterile in his view of the modern world. Ultra-clean lines, metal and glass are everywhere to be seen.  You built a massive set that was nicknamed Tativille and then shot it with 70mm film—those were your best ideas.  The set design is awesome—everything else sucks, just like you, Jacques Tati! 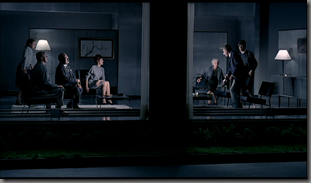 Hulot’s mindless wandering is overlapped with the sightseeing of an American tourist played by Barbara Dennek.  Through their travels you visually criticize the modern workplace, transportation system, and home.  Along the way you make us watch the complete deconstruction of a restaurant for 45-minutes and then your idiotic carousel of cars.  The only thing in your entire film that I found mildly entertaining was how you designed your apartment scenes to appear as TV screens.  Everything else sucks, just like you, Jacques Tati!

Overall, this film sucks, just like you, Jacques Tati!