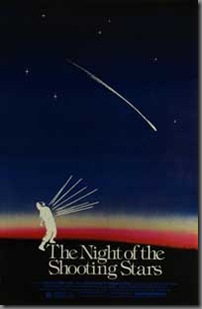 Lyrical, humorous and tragic are the words that best describe directors Paolo and Vittorio Taviani’s The Night of the Shooting Stars (La Notte Di San Lorenzo, 1982). Winner of the 1982 Jury Special Grand Prix at the Cannes Film Festival, this Italian film tells the poignant story of the flight of a San Marino village from their German-mined homes in the waning days of Nazi occupation in 1944. While it is a tad oversentimental at times, the movie benefits from an outstanding musical soundtrack and beautiful cinematography.

The story is narrated by a mother to her sleeping child on the Night of San Lorenzo, which according to Italian folklore is the night when all dreams come true.  She remembers her six-year-old self and her fellow villagers daring 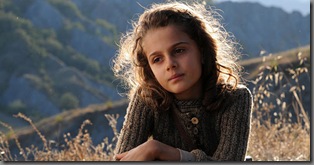 escape from retreating Nazis and Fascist collaborators on her own Night of San Lorenzo in 1944. Half of the village chooses to take refuge in the cathedral, where they have been promised by the Nazis and the Bishop that they will be safe.  The rest of the village doesn’t trust the Nazis and decides to set off to find the advancing American army.  Obviously the fleeing group had the right idea, as those who go to the cathedral are treated to a bomb as they receive holy communion.  Knowing that they will be shot if found on the road, the fleeing villagers band together for a tragi-comic exodus unlike any other.  Along the way they meet resistance fighters and encounter blood-thirsty Fascist collaborators—there is a particular father/son Fascist team that is so revoltingly evil that I actually clapped when they were killed.  Conflicting personalities and unresolved village grudges amongst the group adds a bit of comic relief to what would have 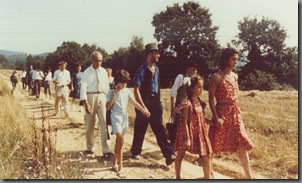 otherwise been a somber march toward safety. Combined with the lighter moments, the violence and death that takes place is somewhat more palatable.

When I reflect on what I liked about the movie two things stand out: the cinematography and the music. Shooting in the Tuscan countryside,  famed cinematographer Franco Di Giacomo captures such beautifully breathtaking images you almost forget people are being mercilessly killed.  It’s easy to see why Di Giacomo won the Donatello Award for Best Cinematography at Italy’s version of the Oscars.  The vast expansive shots of the countryside are poetically composed with pristine lighting and framing.  The spectacular shots in the wheat fields create both a pastoral feeling and an overbearing brutal sense of nature when things turn violent.

The memorable music fits perfectly with every scene.  Nicola Piovani wrote the score and it is played throughout the movie. It is lyrically haunting and memorable.  His use of both Richard Wagner’s Tannhauser and Giuseppe Verdi’s Messa da Requiem is simply brilliant. Verdi is leaned heavily upon in both the pivotal church 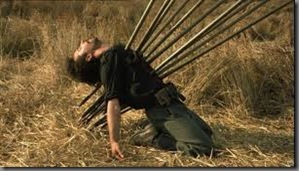 bombing scene and the iconic wheat field battle.  The film has a few surreal scenes, so when “Dies Irae-Tuba Mirum” starts playing during a scene where our child narrator envisions an old man as a classic Roman warrior hurling spears at his enemy, its pretty awesome to watch.  I love Verdi’s Requiem Mass and when it is properly placed in a film, as it is here, then it has extra emotional pull for me.

Overall, The Night of the Shooting Stars is an emotionally engaging film that is both beautiful to look at and pleasing to the music lover’s ear.  While I can’t place it on the same level as Cinema Paradiso (1988) or The Children Are Watching Us (1944), it is still one of the better Italian movies I’ve seen.