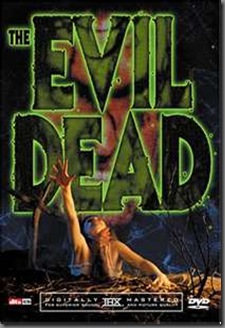 (Please be advised that some of the images contained in this post may be disturbing.)

The Gory Dead is more like it. Sam Raimi redefined the horror genre when he wrote and directed The Evil Dead (1982). Working with a paltry budget of $375,000, Raimi and his 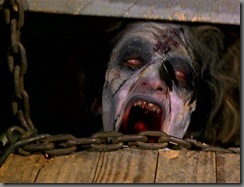 childhood friend Bruce Campbell (the film and its franchise star) took excessive violence and gore to a whole new level with this small independent film that has developed a cult following.  While it has not aged well, it’s juvenile humor and amateurish special effects scared the hell out of audiences in 1982.  Today, it just comes off as camp horror.

The story takes place in the backwoods of Tennessee, where 5 college students rent a cabin for Spring Break. As soon as they set eyes on that dilapidated shack they should have turned back for civilization.  Still, if they had done that they wouldn’t have found a Book of the Dead or recordings of chanting voices—oh, and don’t forget the trap door that opens on its own or the basement filled with all sorts of creepy things. No, there is no room for intelligence in a juvenile slasher film like this. The violence begins when Cheryl (Ellen Sandweiss) is lured by demonic voices into the woods and then is raped by—wait for it—trees.  Yes, I said trees (and it was a legitimate rape, 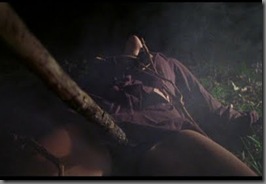 believe me).  Anyway, she’s infected somehow by the demonic trees and she starts to turn into a demon herself.  This sets off a chain reaction of death and zombiehood that places the movie’s hero, Ash (Bruce Campbell), in the role of zombie killer. I won’t give the ending away, but it’s ambivalent and opens the door for sequels—which were The Evil Dead II (1987) and Army of Darkness (1992), and, yes, a remake of the original which is due out in 2013.

Compared to the violence movie viewers are confronted with today, what takes place in The Evil Dead seems pretty tame.  Yet, it was banned in many countries and was at one time given a NC-17 rating by the Motion Picture Association of America. I suspect its limited circulation and rating woes with the MPAA helped it develop the cult following it has today.  Yes, there is a lot of blood, but it’s amateur hour at the horror house.  Not once did 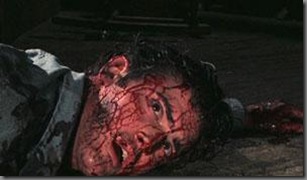 any of the blood or guts I saw look real—everything was done on the cheap and it shows. The only thing that was in the least disturbing was the tree rape (I can’t believe I just wrote that again!), and that was because I just couldn’t believe my eyes. Some have called this scene misogynistic and Raimi says he regrets writing it—I just call it stupid and depraved.

To me when you make a movie called The Evil Dead it should be scary, not campy.  I suppose it’s the word evil that I get hung up on—you should deliver on what you advertise. For example, when you go to see a film like The Exorcist (1973) you know there’s bound to be some unsettling horror about to take place because of its title. Still, there are benignly-titled films like Candyman (1992) that are crap your pants scary, so maybe I can’t quibble too much…

Overall, The Evil Dead is a slightly passable 1980s horror movie.  It has its enthusiasts, I’m just not one of them.