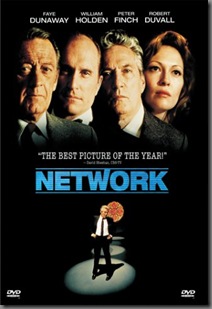 When Paddy Chayefsky wrote his Oscar-winning screenplay for Network (1976) it was supposed to be satirical. Lensed through the 1976 eye I’m sure audiences found an opinion-spouting news anchor and a network devoted to developing reality-based programming as absurd. To the first-time 2012 viewer it just seems par for the course.  Obviously, news anchor Howard Beale (Oscar-winner Peter Finch) was not the only prophet working on Network. 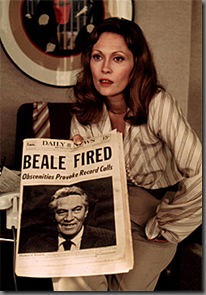 One of the promotional posters for Network warned: “Prepare yourself for a perfectly outrageous motion picture”. This behind the scenes look at a struggling TV network (UBS) and the people who shape its message is wickedly funny.  When ratings decline the network decides to fire long-time news anchor Beale and hire an outrageous ratings-whore programming director, Diana Christensen (Oscar-winner Faye Dunaway).  After Beale loses it on the air and encourages his audience to shout out their windows: "I'm as mad as hell, and I'm not going to take this anymore” Christensen’s brain almost explodes when it calculates the possible ratings points that The Howard Beale Show, starring the mad prophet of the airways himself, could garner.  Not everyone thinks this is a good idea, namely news division director Max Schumacher (Oscar-nominated William Holden).  Of course, he has his own problems, as the network’s hatchet man, Frank Hackett (Robert Duvall), wants Schumacher out, too.  Soon, Schumacher finds himself forced into retirement and engaged in a May-December affair with Christensen, a woman he both loves and views as “television incarnate: 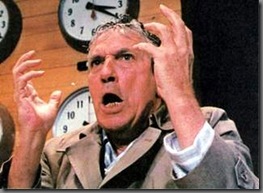 indifferent to suffering; insensitive to joy”.  Christensen will do anything for a 50 share: create a show called The Mao-Tse Tung Hour, featuring a radical group of terrorists called the Ecumenical Liberation Army; push a lover out of his job if he doesn’t agree to work with her on her programming ideas; and, plan the assassination of Beale when his ratings drop—thus, insuring even higher ratings for the second season of The Mao-Tse Tung Hour.  It sounded and played as outrageous in 1976, today it doesn’t seem too far-fetched when you think of certain “news” personalities or the over-saturation of reality-based series we find across the airwaves on a daily basis.  Hell, we’ve even had a live execution on TV—Diana would be so very proud with how far programming has come in the last 30+ years. 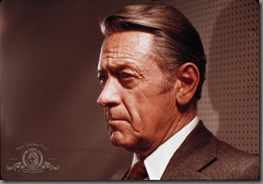 No script is ever strong enough to stand on its own, not even one as good as Network’s, so it helped that five great actors played significant roles in the film.  Legendary Hollywood star William Holden was the perfect choice for the jaded, world-weary Max Schumacher, because by 1976 that was exactly what he was.  He’d played jaded characters in the 1950s and 1960s, but by the 1970s he knew the perils of the entertainment industry on both one’s health and psyche and he perfectly showcased it in his performance.

For Peter Finch, Howard Beale was the role of a lifetime—literally, as he died of a massive heart attack while promoting it.  He would be the first of two people to win a posthumous Academy Award for his unflinching portrayal of the unhinged news anc 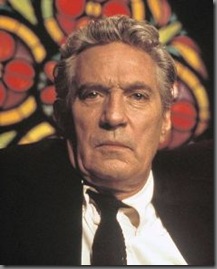 hor.  As long as people watch films he will be remembered for delivering one of the most iconic lines in cinematic history: "I'm as mad as hell, and I'm not going to take this anymore”. Finch played angry men well, never too over-the-top with just enough angst that you felt compelled to watch their meltdowns.  What makes his performance even more stunning is that he mostly plays off himself—90% of his scenes are comprised of him speaking to his audience—there is no give and take between actors, just a lot of giving on Finch’s part.  It must have been a viscerally exciting part to play.

Supporting players, Robert Duvall and Ned Beatty, added their own unique brands to the film. Duvall played his cut-throat vice-president of programming and all around-axe man with just the right amount of menace and coolness.  His character is reprehensible and you know it.  Beatty, who plays Arthur Jensen (and was nominated for an Academy Award), the chairman of the conglomerate that owns UBS, is in just a handful 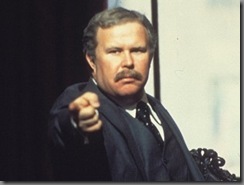 of scenes but they are some of the best in the entire movie.  When his Jensen explains to Beale why everything is connected (the corporate/international cosmology speech) you don’t know just what to believe. Is he telling Beale these insane things to placate his star’s delusions or deep-down is what he is saying really true, but just with a little crazy dust sprinkled on for Beale?  And, really, when you think about it, isn’t Jensen just a bit right when he says (paraphrased for brevity's sake):

“There are no nations. There are no peoples… There is only one holistic system of systems, one vast and immane, interwoven, interacting, multivariate, multinational dominion of dollars. Petro-dollars, electro-dollars, multi-dollars, reichmarks, rins, rubles, pounds, and shekels. It is the international system of currency which determines the totality of life on this planet. That is the natural order of things today. That is the atomic and subatomic and galactic structure of things today! There is no America. There is no democracy. There is only IBM, and ITT, and AT&T, and DuPont, Dow, Union Carbide, and Exxon. Those are the nations of the world today. We no longer live in a world of nations and ideologies, Mr. Beale. The world is a college of corporations, inexorably determined by the immutable bylaws of business. The world is a business, Mr. Beale…One vast and ecumenical holding company, for whom all men will work to serve a common profit, in which all men will hold a share of stock. All necessities provided, all anxieties tranquilized, all boredom amused.”

But what makes this film so unforgettable is Faye Dunaway’s flawless performance as Diana. Director Sidney Lumet was worried about working with Dunaway, as she had (has) a reputation as being difficult, so he met with her before filming began. 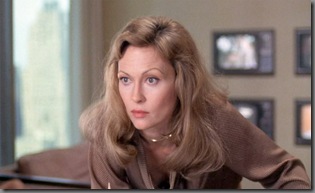 Even before she could say a word to him he said to her, “I know the first thing you’re going to ask me: Where’s her vulnerability? Don’t ask it. She has none. If you try to sneak it in, I’ll get rid of it in the cutting room, so it’ll be wasted effort.” And, there is no vulnerability—Diana is self-preservation personified.  This woman lives for television and ratings.  Everything, and I mean everything, revolves around TV. If you are discussing market shares and demographics during sex you know things have gone too far for you. When opening the discussion about a pending affair with: “here we are: Middle-aged man reaffirming his middle-aged manhood, and a terrified young woman with a father complex. What sort of script do you think we can make out of this?” things probably aren’t going to end well. And, when you end a relationship by saying: “I don't like the way this script of ours has turned out. It's turning into a seedy little drama” and your partner asks if you’re cancelling the show (your relationship) you are just too, too much.  She was a reality TV star without even being on TV.  And, who could make self-absorption and bitchy look sexier than Dunaway?  Just a phenomenal performance.

Overall, Network was nominated for ten Academy Awards (it won four, including Best Supporting Actress Beatrice Straight).  While it might have lost out to Rocky (1976) for Best Picture, it is one of the most important films of the 1970s. It tapped into something about the entertainment industry that most people in 1976 thought was nothing more than black comedy—ah, but what a prophetic film it turned out to be.