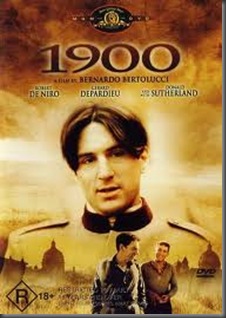 So this film is really long—really long: 317 minutes.  I’m not always opposed to films that take an inordinate amount of time to watch. I liked Shoah (1985), War and Peace (1967), and Fanny and Alexander (1983). But then there are films like director Bernardo Bertolucci’s 1900 (1976), which seem to drag on for way too long.  Granted, Bertolucci was working for a producer (Alberto Grimaldi) who locked him out of the editing room, but someone had to shoot all of that footage in the first place, now didn’t they?  There are two versions of this movie, one with a run time of 245-minutes a 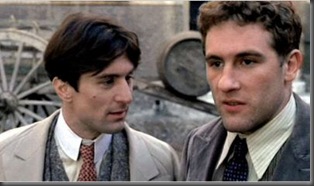 nd another with 317.  I had the not so pleasure of watching the NC-17 version which runs 317—graphic violence, nudity, and explicit sex abounds.

The story begins in 1900 when two boys are born on the same day at the Berlinghieri plantation in Emilia, Italy.  Alfredo Berlinghieri (Robert De Niro) is the grandson of the padrone (Burt Lancaster), while Olmo Dalcò (Gerard Depardieu) is the illegitimate grandson of the plantation’s foreman (Sterling Hayden). Despite their social positions the boys become friends, and the movie traces the unlikely pairing’s intersecting lives until 1945 (Liberation Day). Along the way we learn that Alfredo is a bit of a coward and Olmo is nobly heroic, but that doesn’t mean that one is more likable than the other.  When Olmo becomes involved with the Socialist movement there is a visible darkness to his personality; whereas, Alfredo always seems more accepting of others’ oddities (he idolizes his gay uncle [Werner Bruhns] and marries a crazy woman [Dominique Sanda]). The complexity of Alfredo and Olmo’s friendship is the best thing about the entire film.

Of course we couldn’t have an Italian movie set between 1900-1945 that didn’t examine the rise of the Fascists and the would-be liberation of the Italian peasants.  Bertolucci’s political metaphor is heavy-handed, and, at times, difficult to stomach (he obviously had 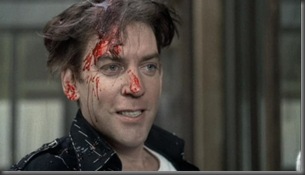 certain leanings).  His decision to make the psychotic and sadistic overseer of the Berlinghieri plantation the face of Fascism was telling. Naming said overseer Attila (Donald Sutherland) and pairing him with a woman as deranged as him (Laura Betti) was just an added bonus.  Sutherland plays his character in such an over-the-top manner that it borders on camp.  I blame Bertolucci for this—a better director would have reigned in this cartoonish performance.

Still, the production values of 1900 are top-notch. As usual Ennio Morricone creates a memorable score and soundtrack, and cinematographer Vittorio Storaro exquisitely captures the Italian countryside.  For the most part the set desi 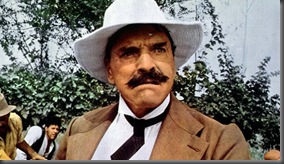 gns and costumes are period appropriate, but something happened in the editing room—not enough cuts!  Franco Arcalli and Grimaldi did a great disservice by not trimming a lot of excess nonsense.  I don’t know if I can blame them alone, though, as it was Bertolucci who thought it was a good idea to shoot prolonged scenes with full frontal male nudity, and, most absurdly, a scene where Lancaster attempts to get an erection so he can molest a peasant girl.  Oh, and lest I forget the scenes where Sutherland kills both a cat and a young boy.  Did Bertolucci really have to shoot such graphic scenes of depravity to illustrate that Attila was a mean bastard?  Ick!

Besides the friendship of Alfredo and Olmo, what I liked most about 1900 is that I got to see Depardieu when he was handsome.  It sounds a bit shallow, but since he has now morphed into a bloated old Frenchmen, it is nice to remember that he used to be a somewhat good looking man.