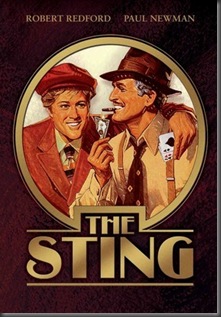 Other than my husband, Mr. Clooney, there never was a sexier man than Paul Newman. As such, I would enjoy watching The Sting (1973) even if the story wasn’t extremely clever and the music memorable.  Thankfully, Oscar-winning director George Roy Hill’s Best Picture winner is all of those things and so much more. Nominated for ten Academy Awards (it won seven), The Sting is loaded with great performances and is a stylish production. 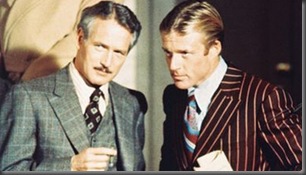 The Oscar winning screenplay by David S. Ward was inspired by real life grifters Charley and Fred Gondorff.  In the film, Newman plays Henry Gondorff, an accomplished confidence man who knows how to stack the deck like no other person.  He becomes paired up with a hot-headed hustler named Johnny Hooker (an Oscar nominated Robert Redford) when a mutual friend (Robert Earl Jones) is rubbed out by no-nonsense crime boss Doyle Lonnegan (Robert Shaw).  To “sting” the mobster out of $500,000 the pair constructs an elaborate con game based on something called “the wire”. They enlist dozens of known con artists in and around Chicago to reign down their own special bra 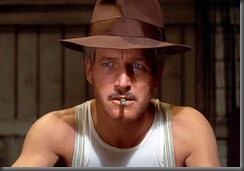 nd of revenge on Lonnegan.  Along the way they must also evade a crooked cop (Charles Durning) and a cold-blooded assassin (Dimitra Arliss), and they must also try to do the one thing that no con worth their salt wants to do: they must trust one another to finish the big score.

It goes without saying that the story keeps you guessing. Will there be a double-cross? Who’s telling the truth?  How can Newman still look that hot at 48?  Ward’s script is smart and well-constructed.  I didn’t notice any fat that could have been trimmed; and, all of the elements of the plot folded together very nicely right up to the end.  I’m a fan of smart scripts, and this is definitely one of the smartest of the 1970s.

Strangely, what most people remember about the movie is its score. Marvin Hamlisch’s Oscar-winning adaptation of Scott Joplin’s rag is memorable.  For days after watching this I had the tune bouncing around in my head.  Both Joplin and ragtime saw a resurgence in popularity during the 19 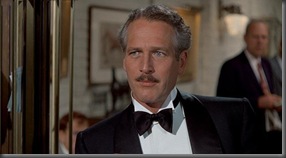 70s because of Hamlisch’s inspired (quite literally) soundtrack.

This was the second time Newman, Redford, and Hill worked together (they’d done Butch Cassidy and the Sundance Kid in 1969) and it showed.  There’s a familiarity to the two leads interactions onscreen that builds an instant camaraderie between their characters. Newman plays the elder splendidly, and Redford looks like he’s really taking mental notes from a master.  Personally (and perhaps selfishly), I wish Newman’s Gondorff was featured more in the film, but I can’t really complain about how much time is spent on Redford’s Hooker.  Still, a few

more shots of those Newman eyes would have been nice…

Of course, no film can be good without a gifted supporting cast.  I adore Eileen Brennan, so of course I loved her Billie here.  While she may have not gotten as much screen time or dialogue as I would have liked, who can play a tough broad like Brennan?  And, of course, no one played an SOB like Robert Shaw, either.  It is reported that no one wanted to play Lonnegan and that Newman hand-delivered the script to him in London. The limp he incorporated into this role w 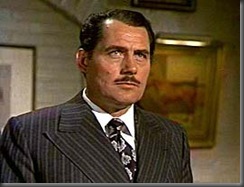 as a real one, as he had an accident one week prior to filming that injured his knee.

Finally, kudos must be sent out to Edith Head’s Oscar-winning costume design and James Payne and Henry Bumstead’s Oscar-winning art direction.  The story takes place in 1936 and it looks like it.  The clothes, hairstyles, and mise en scène are all spot on.  Heck, they even used title cards to educate the audience on the various parts of a sting.

Overall, I enjoyed The Sting. It’s a highly entertaining film that is filled with good performances and smart writing.  Plus, Newman just looks so damn sexy!