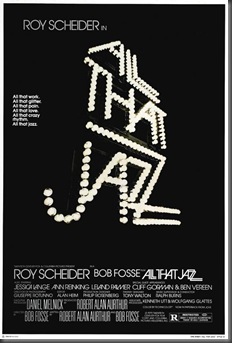 This is vanity at its most pretentious. Fellini had his 8 1/2 (1963) and director Bob Fosse had his All That Jazz (1979). Like Fellini, there is much to like about a Fosse production, but there are also, like Fellini, quibbles to be had, too.  Films with an autobiographical bent can sometimes become too fantastical, and, well, self-indulgent—there are elements of both in All That Jazz. 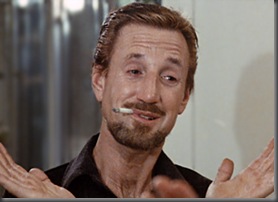 Joe Gideon (Roy Scheider) is a successful director of films and musicals, as well as a gifted dancer and choreographer. But, he’s also a chain-smoking, womanizing workaholic on the verge of a massive coronary. He starts his days off by listening to Vivaldi’s Concerto in G, popping dexedrine, and smoking a pack of cigarettes before breakfast.  In what can only be described as an extended ostentatious reflection, the audience gets to eavesdrop as Gideon discusses his life with a scantily-clad Angel of Death (Jessica Lange)—with  over-the-top Fosse musical numbers scattered in for good measure.  By the end of the film you are either pleased as punch with the ending or asking yourself WTF just happened—or per 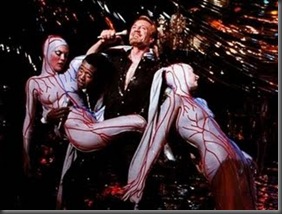 Well, it wouldn’t be a Fosse film if there wasn’t singing and dancing, so let’s start with the musical numbers.  I love musicals, but for some reason I didn’t really like any of the numbers in All That Jazz. Sure, I loved hearing George Benson’s “On Broadway” at the start of the film, but found myself overly-taxed by watching the infamous cattle call at the beginning.  Then, there’s “Take Off with Us”. The first part is palatable, the second part is one step above soft-core porn, and, as such, not my cup of tea.  And, finally, there is the series of numbers relating to Gideon’s impending demise: “After You’re Gone”, “You Better Change Your Ways”, “Who’s Sorry Now,” “Some of These Days,” and “Bye Bye Life”. The prod 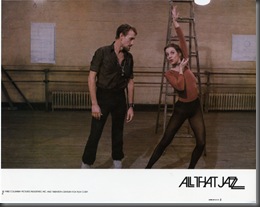 uction designs and costumes are interesting (both won Oscars), but the musical numbers seemed lacking.

Then, there’s the acting.  Scheider was nominated for an Oscar, and overall I think he does a nice job of showing what a complete hedonistic ass Gideon is. I suppose before he started making Jaws sequels he was a decent actor. Still, I didn’t think his was the standout performance. I particularly enjoyed Leland Palmer as Audrey, Gideon’s ex wife, and Erzsebet Foldi as Michelle, Gideon’s daughter.  My two favorite parts in the film involve the scenes where the two of them dance with (or in the case of Audrey, around) Gideon.  The complexity of his relationships with Audrey and Michelle shine in these two particular instances, and give much more depth to Gideon’s pe 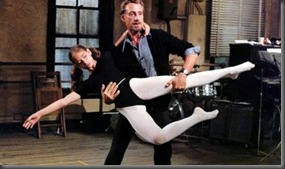 So, I’m not exactly raving on this, am I? Still, I gave it a **1/2 rating, so I guess I should say why.  I think Fosse tells the story in a highly unusual and entertaining way.  Yes, it can be pretentious at times, but the way he puts all of the varying parts of the story together to meet at a pretty startling conclusion is inspired storytelling in my opinion.  Alan Heim won an Oscar for his editing of this, but I suspect Fosse had a heavy hand in every single cut.  Sometimes originality doesn’t work, but that is not the case with All That Jazz.