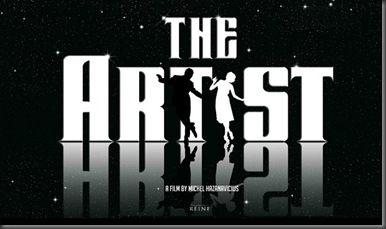 When it comes to artistic achievement, director Michel Hazanavicius’ The Artist (2011) should be duly lauded. Nominated for ten Academy Awards, it took home Oscars for Best Picture, Best Director, Best Original Score (Ludovic Bource), Costume Design (Mark Bridges), and Best Actor (Jean Dujardin). Making a silent, black and white movie in 2011 took guts, and in the end it paid off for Hazanavicius and Dujardin. Still, that doesn’t mean I have to love this film—which I obviously didn’t as indicated by my **1/2 rating. I liked Hugo (2011) far more than this and was beyond shocked that my husband Mr. Clooney’s performance in The Descendants (2011) was beat out by a man who spoke less than five words. Perhaps this sounds like sacrilege to some, but I don’t care, I just wasn’t that impressed.

Dujardin plays George Valentin, a silent-era film star on top of Hollywoodland in 1927. As handsome as John Gilbert and athletically gifted as Rudolph 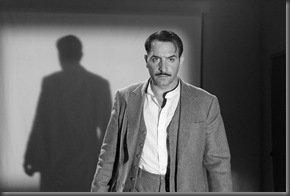 Valentino, Valentin is admired by his fans and valued by his studio, Kinograph. But things change dramatically for Valentin when his studio head, Al Zimmer (John Goodman), decides to scrap silent films in favor of the sound era and replaces his “old” actors with fresh, young faces like Peppy Miller (Bérénice Bejo), a woman who got her start in Tinseltown because of Valentin. By 1931, Valentin is pawning and auctioning off his belongings and is mired in alcoholism and depression. It is left up to Peppy to bring Valentin back from the brink and reinsert him in the celluloid frame.

So, what did I like about The Artist? Guillaume Schiffman’s cinematography is brilliant. He may have lost the Oscar to Robert Richardson’s work in Hugo, but coming in second to that effort is no reason to be ashamed. Schiffman shot The Artist in color and at a frame rate of 22 fps (to mimic the silent era’s standard speed). Every detail was matched to the equipment used in 1920s silent films. I have said it numerous times, but I’ll say it again: 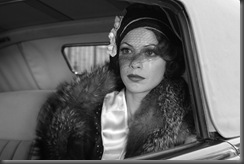 there is no more beautiful cinematography than a well-composed, pristine black and white shot movie.

The other two things that I like about The Artist are Bejo and Uggie (who plays Jack the dog). While I couldn’t help but admire Dujardin’s handsomeness, it is Bejo who stood out the most to me. Her performance adds depth to this film, and it isn’t difficult to notice that Dujardin’s best scenes are the ones in which he appears with Bejo. She has what they call in France je ne sais quoi. While Uggie might not be described quite the same

way as Bejo, he is absolutely adorable. Of course, I love dogs, so he had an extra advantage.

In the end, I am not a huge admirer of The Artist. I respect it as a daring piece of art in a cinema world infested with CGI and intellectual bankruptcy, but it just wasn’t “all that” to me. Still, I think it should be respected for its artistic integrity and outstanding cinematography. But, I must say this once more: my husband, Mr. Clooney, was robbed.