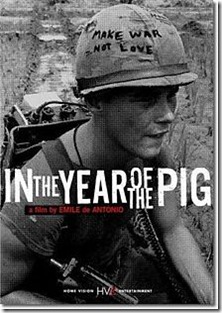 No matter how hard you might try to avoid inserting bias into a documentary you almost always fail.  However, that does not disqualify your overarching aim. Such is the case with director Emile de Antonio’s Vietnam War documentary, In the Year of the Pig (1969). When it was initially released in 1968 the war had started to become increasingly unpopular in the United States, and the film only added to the growing anti-war sentiment. What I find most compelling about the documentary is the parallel ‘truths’ that de Antonio exposes. As a student of history, I know all too well that policy does not always conform to reality, and that is the overriding thesis of this timely documentary. 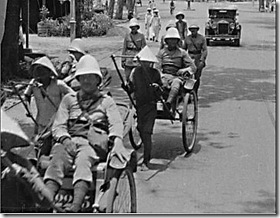 I use this film in my American History Since 1945 class to help students understand how we became involved in the Vietnam morass. By showing why the Vietnamese hated colonialism (thanks primarily to French greed and incompetence) de Antonio builds a platform from which to spring into the American ‘advising’ period, and from there, the Gulf of Tonkin mistruths used to expand American involvement in the country.  All the while, there is that insidious insinuation that the communist menace must be stopped in Vietnam or Eisenhower’s fears of the Domino Theory would come to fruition. For most students, this film cements what they’ve read in their textbooks about how democracy can’t be forced upon countries—especially through coercion, propaganda, fear, and, sadly, undemocratic means.

Shot in black and white, the film uses snippets of news footage to visually identify the historical context.  While this is a useful tool, it would be w 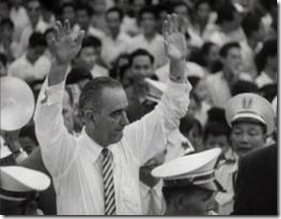 orthless if de Antonio didn’t also use sound bytes from various political speeches—most notably from a whole assembly of men who would occupy the presidential wing of the White House. He plays their talking points against face-to-face interviews conducted with journalists, peace activists, and members of the intelligentsia. de Antonio cleverly edits back and forth between the irrational (and short-sided) policy-speak of the politicians and that of the rational analysis of those whose are not bound by a sworn hatred of objectivity.

Of these interviews, my favorite is with Paul Mus—he was the perfect candidate to discuss Vietnam.  A French scholar who specialized in Far Eastern studies, he grew up in northern Vietnam and was an adviser to General Philippe Leclerc during the reconquest period. de 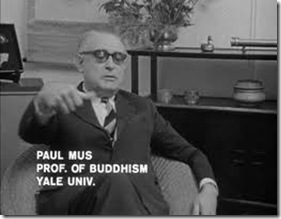 Antonio found him at Yale University, where he was specializing in Buddhist studies.  Here was a man who knew the country—its history, culture, and people.  He’d also had personal discussions with Ho Chi Minh when he served as an adviser to Leclerc. You need only listen to him discuss the Vietnam question and its people and in a very concise nutshell he explains that no matter how long America remained in country that nothing would change—the Vietnamese had dealt with would-be conquerors for over a millennia, so they knew that patience was a virtue.

Overall, In the Year of the Pig is an insightful documentary about the Vietnam question. At times, it is a bit heavy-handed (especially when de Antonio uses American patriotic music ironically or shows American soldiers dead and injured on the battlefield).  Still, taken as a whole, I find it to be one of the most well-done and educational documentaries ever made about the Vietnam conflict.