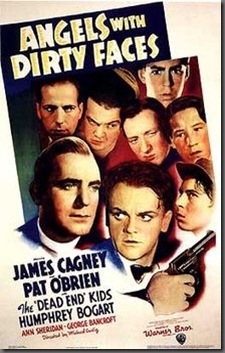 (This is my contribution to the James Cagney Blogathon, which is organized by R.D. Finch at The Movie Projector and runs from April 8-12.)

Few actors played the fast-talking, posturing gangster better than James Cagney.  He did it so well that he often found himself typecast in tough-guy roles, while seeing parts he coveted awarded to other actors who ‘fit’ the role better.  At heart he was a song-and-dance 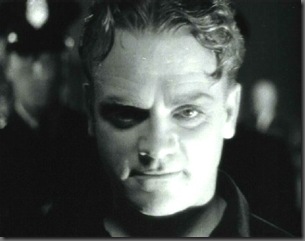 man, who began his career in vaudeville and never got it out of his blood.  Yet, it is primarily his work in such famous gangster films as The Public Enemy (1931), Angels with Dirty Faces (1938), and White Heat (1949), that he is most recognized.  Perhaps it is ironic that the character-type he so wanted to avoid being pigeonholed into is the one that he is most famous for, but at least he can take solace in the fact that he was Hollywood’s Golden Age version of Robert De Niro. Of Cagney’s three Academy Award nominations, two of them were for gangster parts. The first of these nominations came from a career-changing turn in Angels with Dirty Faces.

When Warner Bros first offered Cagney the role of gangster Rocky Sullivan in director Michael Curtiz’s Angels with Dirty Faces his agent was convinced Cagney wouldn’t take it.  The script called for Rocky to ‘turn yellow’ as he was being escorted to the electric chair—a character trait that no other Cagney character had ever exhibited. Fortunately the agent was wrong, and Cagney saw an opportunity to pr ove to critics and producers that he had a broad acting range.  For many it was shocking to see the quintessential tough-guy crying out in anguish as he was about to pay for his crimes.  While some viewers today find this overly-moralized act a bit difficult to accept, Rocky’s final ‘redemptive’ act fit Curtiz’s social responsibility style and was also a way to sidestep the Hays Code—how else could Cagney’s murderous character retain a touch of heroism in an era when cinematic criminals had to pay for their sins.

If there was a studio who knew how to make an effective gangster melodrama it was Warner Bros. Angels with Dirty Faces was one in many of a long line of films the studio produced where childhood friends found themselves on the opposite side of the law as adults (Manhattan Melodrama and Dead End spring to mind).  Growing up on the Lower East Side of New York City in the 1920s, Jerry Connolly (Pat O’Brien) and Rocky Sullivan (Cagney) were juvenile delinquents one step away from the reformatory. It was that one 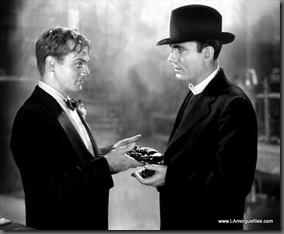 step that actually led one (Rocky) into a life of crime and the other (Jerry) into the priesthood.  As a result, when the two friends are reunited as adults they find themselves in conflict. In particular, Father Jerry has dedicated his life to keeping other young men  (played by the “Dead End” Kids) from ending up like Rocky. The problem is, Rocky has money, power and prestige—all the things the boys in the neighborhood admire.  What transpires is a morality tale about the ills of vice and the redemptive nature of self-sacrifice.

While there is a smattering of a romance between Rocky and a social worker (Ann Sheridan) in the movie, the story is primarily male-centered. Cagney and O’Brien played well off one another.  The two men were great friends off-screen, and i

t usually showed in the nine films they made together. Angels with Dirty Faces also marked the first of three films that Cagney and Humphrey Bogart worked opposite one another.  Bogart was not yet a bona fide Hollywood leading man, and he found himself playing second fiddle to Cagney.  Here his Jim Frazier comes off as a spineless desperate man—a ‘type’ that Bogart often found himself playing in the 1930s, but one that he would forever dump once he was cast as the lead in High Sierra ( 1941) and The Maltese Falcon (1941).

The film’s other male standout is often overlooked, but perhaps deserves the most praise: Frankie Burke, who plays Rocky as a kid.  If you’ve seen Angels with Dirty Faces then you 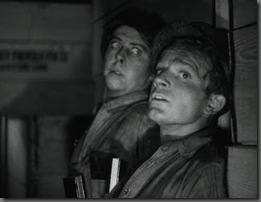 know it starts out with a smart-talking swaggering kid who looks, sounds, and acts a lot like James Cagney.  It took me several minutes to finally determine that Burke, not Cagney, was on the screen. Burke had Cagney down-pat—his speech pattern, mannerisms, and body language were spot on.  His resemblance to Cagney was so uncanny that he was hired on the spot by Warner Bros.

Overall, Angels with Dirty Faces is an engaging film. While Curtiz’s moralizing can appear a tad over the top to some, the story itself does not lack integrity—many a 1930s gangster found himself on the losing end and proved that sometimes crime didn’t pay.  The acting by the leads was good, and Burke’s small role was an impressive one. Max Steiner’s score contrasted with Sol Polito’s stark, expressionistic cinematography. The closing scenes of the movie provides for a memorable conclusion.  And, finally, this was the film that proved to the critics and Hollywood producers that Cagney could indeed act.