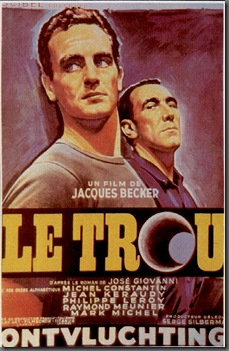 Underappreciated French director Jacques Becker died just a few weeks after filming was completed on Le Trou (The Hole). Becker is primarily known for working as an assistant director to Jean Renoir on such films as Boudu Saved from Drowning (1932), Grand Illusion (1937) and The Rules of the Game (1939), but he was a gifted director in his own right, helming such films as Casque d’or (1952) and Touchez Pas au Grisbi (1954). In a way it is fitting that his last film was about a would-be prison escape, as he himself never fully recovered his health after being imprisoned for a year by the Germans during the Occupation. 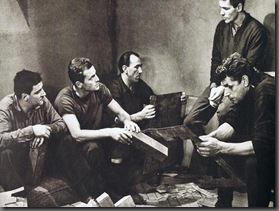 five prisoners. Becker and author Jose Giovanni based the screenplay on Giovanni’s book of the same name.  The cast was comprised mostly of non-professional actors—one (Jack Keraudy) of whom was one of the actual men who tried to escape in 1947—which adds an element of authenticity to an already realistic depiction of the inner-workings of prison life. Becker’s austere and unflinching style is only enhanced by the lack of music and editing in the film.

When Gaspard’s (Marc Michel) cellblock undergoes renovations he is reassigned to a cell with four other men. This couldn’t come at a worse time for these men, as they are about to embark on an arduous task: digging a hole out of La Santé Prison. 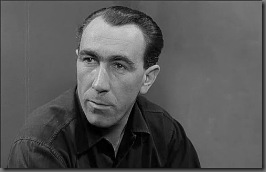 Without a doubt the most badass of them all is Roland (Keraudy)—he’s smart and he knows how to break out of prisons—he is the ringleader.  Geo (Michel Constantin), Manu (Philippe Leroy), and Monseigneur (Raymond Meunier)  are his trusted co-conspirators. The men are apprehensive about telling Gaspard about their plan, but they have no choice as their window of opportunity is closing, and so they enlist him in their daring endeavor. From this point on it becomes a waiting game to see if they escape or if Gaspard can be truly trusted.

What makes Le Trou so special is the painstaking effort that Becker and cinematographer Ghislain Cloquet take to capture the various stages of the escape plan.  Because most of 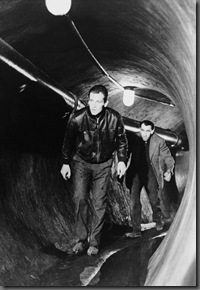 the scenes take place in tight quarters (a cramped cell and underground tunnels), there is a claustrophobic feel to the movie.  Becker employs extreme close-ups and tight-framing, and exceedingly long takes with sparse editing.  For example, when the men first break through the cell floor, Becker chose to film it in real time. The resulting shot is four-minute continuous take of the men using a makeshift tool to break open the floor. Later, when Roland has to file through bars, Becker returns to this technique again.  What this creates for the viewer is a sense of authenticity and personal involvement in the planned escape.

For some, the slow (but realistic) manner in which Becker chose to film Le Trou can be off-putting—and some might even say boring.  For me, I think it creates an air of suspense and realism which most prison escape movies seem to lack.  What stands out most to me, however, is that what I most remember about Le Trou is not the acting, but the time and labor con 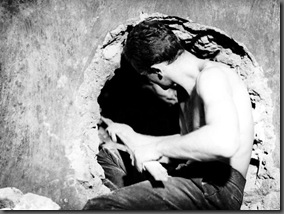 suming project the prisoners endure. Here, the goal is more important than any one individual.  This is a very French theme; and, one which can be disconcerting to American audiences. Nonetheless, Le Trou is now regarded by many critics to be one of the best French films ever made.  I don’t know if I can venture that far in my appreciation, but I still find it to be a gritty, realistic depiction of what it takes to escape from prison.