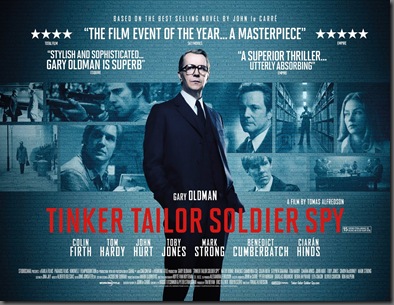 I’ve never read a John le Carré spy novel; nor am I fan of the genre at all.  That doesn’t mean that I lack an appreciation for suspense or that I oppose espionage-based thrillers.  But for me, director Tomas Alfredson’s Tinker Tailor Soldier Spy (2011) was far from thrilling and just a tad suspenseful.  As such, I don’t know why this was one of the movies I had to see before my death.

Based on the le Carré novel of the same name, Tinker, Tailor Soldier Spy is a Cold War-era espionage film. It’s 1973 and the British Intelligence Service has a deep-cover mole at the upper echelons of power.  After a botched mission in Budapest to ascertain the 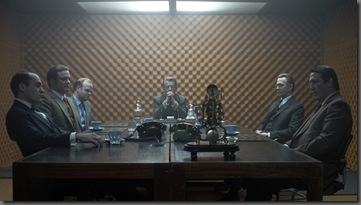 mole’s identity, Control (John Hurt) and George Smiley (Gary Oldman) are pushed out of MI6 and find themselves in early retirement.  Not long after  this Control dies and allegations are made by another MI6 agent (Tom Hardy) that there is indeed a mole. The head of intelligence (Simon McBurney) then recruits Smiley to secretly investigate this claim. What he finds is that Control had narrowed the suspects down to six men: Percy  “Tinker” Alleline (Toby Jones), Bill “Tailor” Haydon (Colin Firth), Roy “Soldier” Bland (Ciaran Hinds), Toby “Poorman” Esterhase, and “Beggarman”, who happens to be Smiley himself. What follows is one of the most unexciting pursuits of truth that has ever dared called itself a spy thriller. When the mole is finally revealed there is no “Aha” moment or a sense that he was even a nefarious sort.  Instead, you shrug your shoulders and wonder how many more minutes are left.

By reading the comments above I’m sure you’ve gotten the impression that I didn’t like this film.  That would be a fair assessment, but incorrect. No, this is one of many movies in “The Book” that was tolerable to watch but far from what I consider must-see cinema. My biggest complaint about the film is how difficult 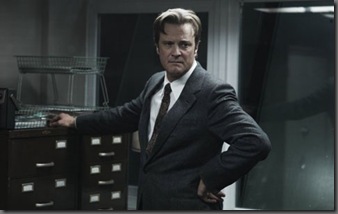 to follow the story is. When Bridget O’Connor and Peter Straughan adapted the screenplay they should have considered the would-be viewer who hadn’t read le Carré’s book.  Daily Mirror film critic David Edwards gives an apt description of my thoughts on the movie: “The big question is whether such a hefty novel can fit comfortably into a feature-length production. Unfortunately, the plot is every bit as bewildering with an overload of spy-speak, a few too many characters to keep track of and a final act that ends with a whimper, rather than a bang."

I did, however, learn a few things from Tinker Tailor Soldier Spy: MI6 is known as the Circus; Treasure is the word used for good intelligence; and Lamplighters is what the surveillance department is called.  There were others, but those are the ones that stood out 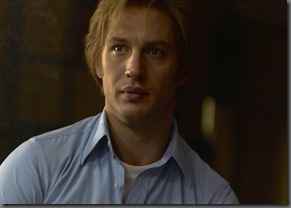 the most. It was also a delight to see a number of old British cars and what passed for fashion back then—though, I must say that Smiley’s suits were quite stylish for tweed (I expect the tailoring helped).

Overall, Tinker Tailor Soldier Spy was an exercise in patience for me.  The plot was difficult to follow and I often found myself irked by Alfredson’s overuse of flashbacks.  Still, Oldman, Firth, and Hardy give good performances in their respective roles, and it is always a delight to spend some time pondering how stupid the Cold War really was.