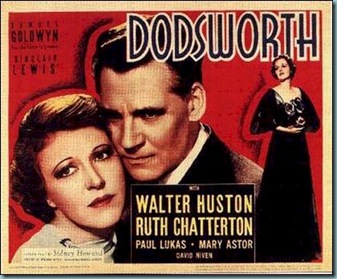 (This is my contribution to the Mary Astor Blogathon, hosted by Tales of the Easily Distracted and Silver Screenings. Please follow this link to find other great contributing posts.)

“Love has got to stop some place short of suicide.” What a great line to walk out on your selfish, self-involved, two-timing wife.  I rank it right up there with, “Frankly, my dear, I don’t give a damn.” Still, director William Wyler’s Dodsworth (1936) is not a particular favorite of mine, but I do admire the performances of Walter Huston and Mary Astor.

Based on the 1929 Sinclair Lewis novel of the same name, Dodsworth tells the the story of the disintegration of an American couple’s marriage as they take the Grande Tour of Europe. After selling his motor company Sam 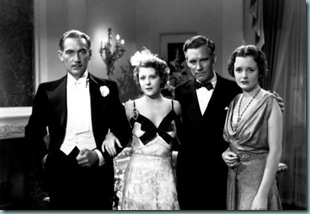 Dodsworth (Huston) decides he and his wife, Fran (Ruth Chatterton), should enjoy life and learn the meaning of the word leisure. For over twenty years they’d spent their lives in a provincial Midwestern town called Zenith, seeing the same people week after week and doing the same respectable thing over and over. On the surface they seem like a happily married couple, but once they set sail for the Old World it soon becomes obvious that they want totally different things out of life. For one, Fran is afraid of growing old. As such, she has a habit of becoming involved in flirtations with young, penniless playboys (in this order: David Niven, Paul Lukas, Gregory Gaye) and socializing with washed-up aristocrats (Maria Ouspenskaya).  All the while, Sam is off sightseeing and really immersing himself in learning about the cities he is visiting.  By the time Fran decides she wants to run off and marry one of the playboys, you can’t help but be happy for Sam—even though he is miserable.  To quote Francis Preston Blair: “Good riddance to bad rubbish.” 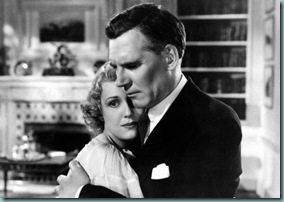 Dodsworth is a drawing room melodrama about the perils of extramarital affairs amongst the rich and fabulous (although Chatterton, in my opinion, is far from fabulous). Hollywood films of the 1930s liked to showcase the goings on of the wealthy to deflect the public’s attention for an hour or two from the misery of the Great Depression.  I personally prefer the comedies to the melodramas—it’s easier to laugh at the rich than feel sorry for them.  I suppose this is one of the reasons I’m not a big fan of Dodsworth.

However, the biggest reason I am not especially fond of Dodsworth is Ruth Chatterton. In every film I’ve ever seen her in she grated on my nerves. She was an accomplished stage actress who never made the necessary transition to movie acting.  What I mean by this is she always came across as stilted and affected—there was no naturalism whatsoever.  I suspect had they got a Myrna Loy or Billie Burke to play Fran I would have enjoyed the film so much better.

What I did like about Dodsworth was Huston and Astor. 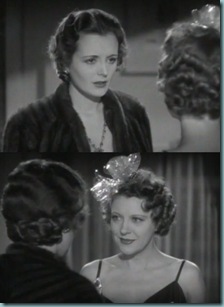 While her part was a minor one, Astor’s Edith Cortright is the most likeable character in the entire movie. One of the standout scenes finds Edith and Fran discussing age.  When Fran comments about wanting to look as good as Edith does when she’s her age the look on Astor’s face is priceless. Of course this only highlighted how desperate Fran was to appear young—especially when you consider that Chatterton was fourteen years older than Astor.  Then, later in the scene when Edith notices than Fran is on the verge of engaging in an affair she says one small word that speaks volumes by the look on her face: “Don’t.” After her turn as Brigid O’Shaughnessy in The Maltest Falcon (1941) Astor was forever linked to playing an unsympathetic character, so it is always nice to see her in Dodsworth where she plays such an agreeable woman. 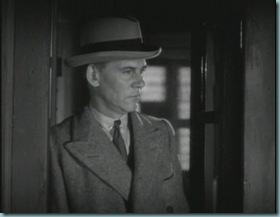 Overall, Dodsworth is a mildly entertaining drawing room melodrama. Fine performances from Astor and Huston somewhat make up for the fact that Ruth Chatterton is so freaking annoying in it.