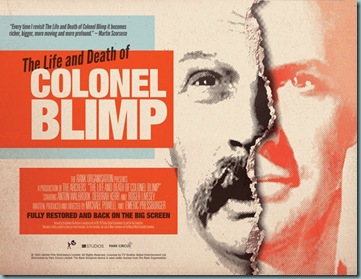 You’d think a film about a career British Army officer’s effort to make the Home Guard strong enough to withstand a German invasion during WWII would please the likes of Prime Minister Winston Churchill and the War Office.  Yet, Michael Powell and Emeric Pressburger’s (AKA the Archers) The Life and Death of Colonel Blimp (1943) was a mild annoyance to the British government, who worried that the film would send the wrong message to Britons. As such, they deprived the Archers access to military equipment and personnel.  Being the Archers, however, meant that they knew how to improvise with whatever they could get their hands on and design what they couldn’t. The end result was a comedy of manners that is both filled with a bit of British introspection and a lot of war-time propaganda. 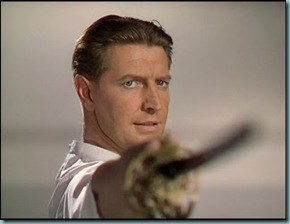 Major General Wynne-Candy (Roger Livesey) is the epitome of the honor bound British officer. To him even war must be conducted in a civilized manner.  We first meet him while he is on leave from the Boer War in South Africa. After reading a letter from a woman living in Berlin that a man he knows is spreading lies about British conduct in South Africa, Candy decides he must put an end to such deplorable behavior. In Berlin he meets the letter’s author, Edith Hunter (Deborah Kerr), and insults what seems like the entire German Army.  This infraction leads to his being challenged to a duel, in which he and Theo Kretschmar-Schuldorff (Anton Walbrook) are forced to wield sabers against one another although they’ve never even met.  When both are injured they recuperate together in a nursing home and a lifelong friendship develops, despite the fact that Theo ends up marrying Edith, the love of Candy’s life. 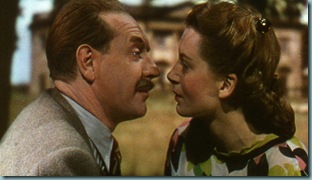 s on Candy’s time in WWI. By this time he has seen many uncivilized things, but sticks to his principles because the Germans, the perpetrators of all sorts of horrors like using mustard gas and torturing POWs, are losing the war.  At a convent he spies a British nurse who looks a lot like Edith. Once home, he finds Nurse Barbara (again Deborah Kerr) and marries her. They spend a few happy years together before she dies while they are stationed in Jamaica.

The last part of the movie looks at how alien the world seems to Candy amidst Nazism and WWII.  Once again he has found an Edith replacement in Angela (yet again, Deborah 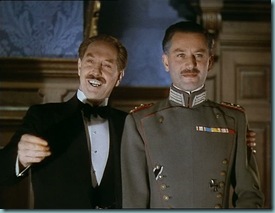 Kerr), his personal driver.  He and Theo are reunited when the retired German soldier flees the insidiousness that has taken over his nation. It is Theo’s unpleasant duty to inform Candy that WWII is not a gentleman’s war and that, “If you preach the Rules of the Game while they use every foul and filthy trick against you, they will laugh at you! They'll think you're weak, decadent!” Ah, the stiff British upper lip would never be the same—for either Candy or Britain. 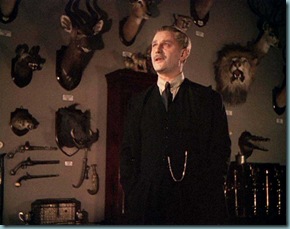 The Archers use two particular methods to show the passage of time. Candy is an avid hunter, and so they chose to use mounted exotic animal heads from the various countries Candy was stationed in. The second method was through a scrapbook that he and Barbara used to document their excursions throughout the British Empire. This was an especially effective tool because once Barbara dies the Archer’s return to showing the passage of time with dead, mounted animal heads again.

The Archer’s also analyze time introspectively. Manners, decorum, honor, and warfare change immensely with the passage of time. How Edith behaves during the Boer War is markedly in contrast to Angela’s more liberated personality during WWII.  When you felt insulted in 1903 you challenged someone to a duel. By 1939, if you felt slighted you started a world war.  And, then there’s Candy.  Poisonous gas, torture, concentration camps, and a whole host of atrocities he didn’t even know about, like the Holocaust, were 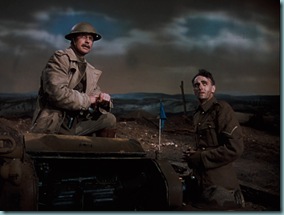 anathema to a man who believed there was a code that both a soldier and society should live by.  Colonel Blimp, our title character, by the way is Candy.  While the title might say ‘the life and death of’, Blimp does not actually die physically. No, he dies metaphysically as a result of the complete destruction of the civilized world by barbarism and Nazism. Most people don’t really consider anymore just how powerful Britain was before WWII, but they controlled a quarter of the globe via trade and colonialism. After the war the British Empire fell on hard times, and like Colonel Blimp, it died, too.

No discussion of The Life and Death of Colonel Blimp would be complete without mentioning how propagandistic it was. No, Churchill and the War Office didn’t really like it, but it did a very good job of convincing viewers that to defeat the Nazis they would have to dispense with good old British honor. The most telling line in the entire film comes from Theo the German: “This is not a gentleman's war. This time you're fighting for your very existence against the most devilish idea ever created 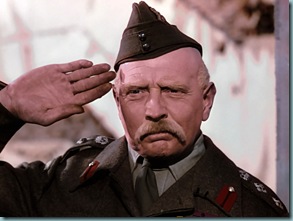 by a human brain - Nazism. And if you lose, there won't be a return match next year... perhaps not even for a hundred years.” With a message like this it is difficult to see why Churchill disliked the movie so much—but, of course, the rumors that Candy was actually a caricature of Churchill might have had something to do with that.

Overall, The Life and Death of Colonel Blimp is an entertaining war film.  It’s not quite as funny today as it might have been in 1943, but the questions it raises in relation to personal and national conduct in times of war are just as relevant now as when the film was released.  One need only consider the United States’ War on Terror and the questions that Zero Dark Thirty (2013) raised about how far a nation should go to defend itself.

Email ThisBlogThis!Share to TwitterShare to FacebookShare to Pinterest
Labels: **1/2, 1943, Powell and Pressburger