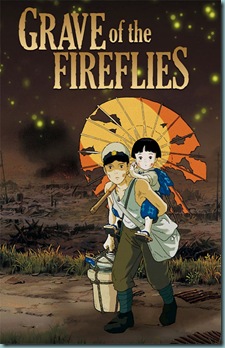 Suffice to say, Japanese animation would have made Walt Disney both proud and sad at the same time.  Aesthetically beautiful, but just so damn depressing is the best way to describe director Isao Takahata’s Grave of the Fireflies (Hotaru No Haka, 1988). More than forty years after Japan’s surrender in WWII, Takahata made one of the most influential war films about the plight of war orphans based on Akiyuki Nosaka’s 1967 semi-autobiographical novel of the same name.

After their village is fire bombed and their mother dies, 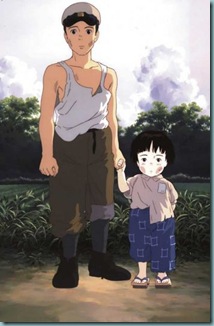 Seita (Tsutomu Tatsumi) and his little sister Setsuko (Ayano Shiraishi) are left to fend for themselves in war-ravaged Japan. The children of a naval officer, they had been spared food rationing and lived in a nice middle class home until they became orphans. Once their mother dies all they have left is one another and a few personal possessions. Seita takes on the role of caregiver to Setsuko, who is far too young to find food. But as the bombing increases the food supply decreases, and we watch as the children steeply decline toward malnutrition.

From the beginning of the film you know things don’t end well, but that still doesn’t prepare you for the gut-wrenching final ten minutes. The overwhelming sense of dread and depression is only heighted by Yoshio Mamiya’s haunting score. Of course, hearing Amelita Galli-Curci sing “Home Sweet Home” as Seita remembers Setsuko in happier and healthier times is enough to bring tears to anyone’s eyes. Which is odd, because for most of the film I found Setsuko’s constant crying annoying, but by the end, I found myself moved by her misery. 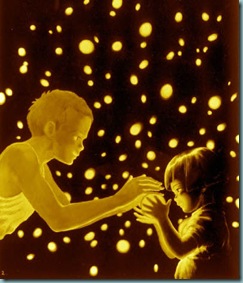 By today’s standards Grave of the Fireflies is not what one would call a dazzling display of animation.  Still, it is artistically designed in such a way that it does create memorable images.  Of particular note is the scene where the children use fireflies to illuminate the dark cave they live in. It is interesting how Takahata blended fireflies and firebombs to develop a thematic atmosphere.  Fireflies are, of course, used metaphorically as well.  One of the most memorable lines from the movie comes when Setsuko asks, “Why do fireflies have to die so soon?”

Overall, Grave of the Fireflies is a heart-wrenching tale.  The story itself is moving, and the ending is powerful.  In addition, there are some compelling images that you won’t soon forget.