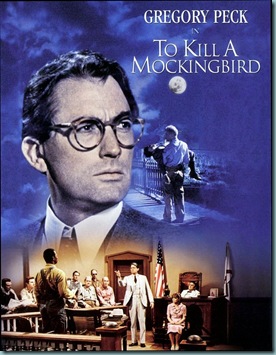 Who doesn’t wish their father was a little bit (or maybe a lot) like Atticus Finch (Gregory Peck)? Kind, soft-spoken, principled, honorable, and patient are the words that spring to 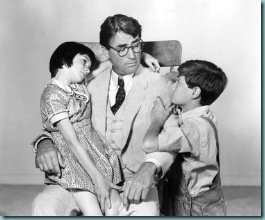 mind when I think of this iconic film and literary hero. If the stories are true that author Harper Lee based her 1960 Pulitzer Prize-winning novel To Kill a Mockingbird on her own father, then she was an extremely lucky child and woman. She was also blessed by the fact that producers Alan J. Pakula and Robert Mulligan (who also directed) brought her novel to the screen and created one of the most timely American films ever.

To Kill a Mockingbird (1962) was released at the height of the American Civil Rights Movement. Dr. Martin Luther King, Jr., had not yet given his famous “I Have a Dream” speech, nor had the nation descended into a fervent anti-war sentiment regarding the Vietnam War.  Still, racism and militarism were prevalent themes running wild in the American mindset.  In 1962 it was still an acceptable practice in the South (and parts of the North, too) to call African Americans ‘niggers’ and to refer to grown black men as ‘boys’. Miscarriages of justice and vigilante retributions ran rampant through Jim Crow and up to its bitter end with the passage of the various Civil Rights Acts (1957-1968).  This is why both the novel and the film To Kill a Mockingbird are such important testaments regarding  Southern Americana.

The story is a Southern Gothic tale told from the 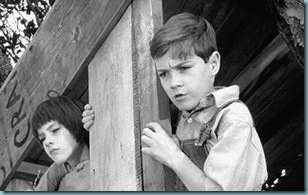 viewpoint of six/seven-year-old Jean Louise “Scout” Finch (Mary Badham).  She and her older brother Jem (Philip Alford) are seemingly the protagonists, but their father, Atticus, is clearly the moral center of the film.  While the children are enchanted and frightened by their mysterious neighbor Boo Radley (Robert Duvall in his big screen debut), Atticus must prepare a defense for his client Tom Robinson (Brock Peters), a black man who is accused of raping and beating a white woman (Collin Wilcox).  The Finch family must endure insults and, most alarmingly, physical threats by Bob Ewell (James K. Anderson), because of the case.  The plot culminates when the Boo mystery and the Ewell threat meet head on one dark Halloween night.

I’m sure everyone has their own particular favorite scene from To Kill a Mockingbird—there are so many wonderful ones to pick from—but I expect the most memorable one is when Atticus delivers his closing arguments to an all-white jury. This is probably the scene that 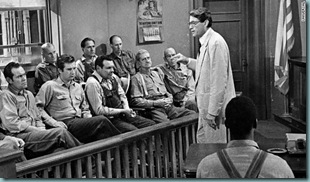 won Peck the Best Actor Oscar. In it, he dares to tell the truth: all of the evidence clearly proves his client is innocent. While he is somewhat resigned to the fact that the jury will come back with a guilty verdict, he vehemently defends his client and discusses the unwritten codes of Southern culture. It is an awesome display of honesty, despair, and condemnation all at once.  Of course, the words that Peck spoke had the added weight of being heard in movie theatres across the country in 1962, too.  It was as though he were truly speaking to the nation about the disease of racism.

There are many things to like about To Kill a Mockingbird. 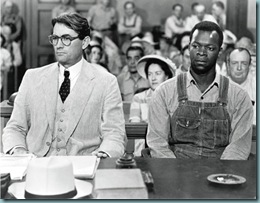 The acting is natural and understated—something that doesn’t always happen when your principal leads are children.  Badham was nominated for a Best Supporting Actress nomination and, of course, Peck won his only Oscar for playing Atticus, but Alford and Anderson also do memorable work, too.  As a matter of fact, I think it was pretty shabby of the Academy to overlook Anderson’s compelling and powerful performance.

Russell Harlan’s black-and-white cinematography is crisp and does an excellent job of setting the Gothic tone.  His effort was greatly aided by Alexander Golitzen, Henry Bumstead, and Oliver Emert’s Oscar-winning art direction.  Their fictional creation of Maycomb, Alabama harkens back to the 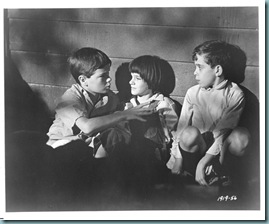 days of old Southern towns where everyone knew one another and children freely walked the streets after dark.  Still, Elmer Bernstein’s whimsical but somewhat eerie musical score suggests that perhaps children shouldn’t be roaming the dark Maycomb County streets.

What I think is most telling about To Kill a Mockingbird (both the film and the book) is how it has endured. While I don’t agree that we live in a post-racist society as some may suggest, I do believe that over the last fifty years America has made great strides in this area.  When I taught middle school, I always had my eighth graders read the book and then we would watch the movie, and they enjoyed doing both (at least as much as they could). Unlike the hysteria that sometimes surrounds teaching The Adventures of Huckleberry Finn, with its constant use of the word ‘nigger’, To Kill a Mockingbird was (at least for me) easily accepted by my students and their families. I suppose having the story told through the eyes of a little girl helped, and the complete condemnation of racism is a plus, too, I’m sure.