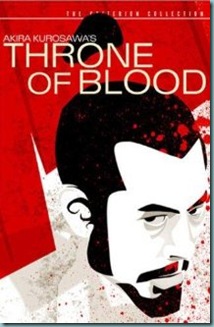 Long before Tony Montana went down in a blaze of bullets in Scarface (1983), Taketoki Washizu (Toshiro Mifune) went out in a flurry of arrows in Throne of Blood (1957). There are memorable death scenes, and then there are extraordinary comeuppances that fell insane Japanese feudal lords.  Of course, famed director Akira Kurosawa was quite adept at staging furious and glorious battle scenes, but for me Washizu’s timely end is unforgettable. 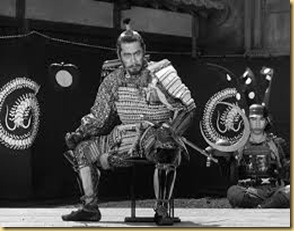 The premise behind Throne of Blood (also known as Spider’s Web Castle) is Shakespeare’s Macbeth. Kurosawa and fellow screenwriters Shinobu Hashimoto, Ryuzo Kikushima, and Hideo Oguni do a wonderful job of refashioning Shakespeare’s play to feudal Japan.  Unfortunately, the corrupting power of unchecked ambition is a universal theme, so the machinations of Macbeth and Lady Macbeth seamlessly transfers to Washizu and Asaji (Isuzu Yamada). This timeless story is enhanced by an ambitious production design and expertly crafted costumes.

The impenetrable Spider’s Web Castle was built high on Mount Fuji in a location known for its fogginess. The thick mist is a character in itself, in that it foretells when something ominous is about to unfold.  Whether it be whe 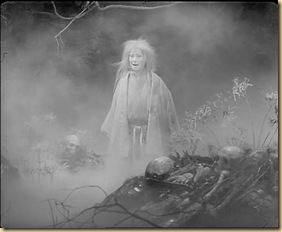 n Washizu and his friend and fellow military leader Miki (Minoru Chiaki) get lost in Spider’s Web Forest and meet the creepy Forest Spirit (Chieko Naniwa), or when Lady Asaji plots to have her husband kill the reigning lord (Hiroshi Tachikawa), thick fog eerily seeps over the landscape. On building the castle, Kurosawa has said that it was one of the most difficult productions of his film career, as the location was quite remote and getting enough workers and materials proved difficult. Fortunately for him there was a U.S. Marine base nearby who helped build the towering set. 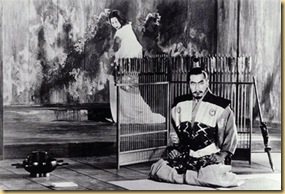 However, the Marines could not be counted on to design and make historically accurate costumes for a cast of hundreds. That monumental task fell to Taiki Mori, who clothed hundreds of men in feudal battle regalia and designed delicate, intricate kimonos for Asaji and others. One particular kimono of Asaji’s is fashioned in such a way as to make her appear and move like an actual spider, which is apt, as she is no doubt something of a black widow, always spinning webs of deceit to ensnare her perceived enemies.

For a film called Throne of Blood you don’t really see a lot of bloodshed. Instead blood is used more metaphorically than anything (although we do see blood on Washizu’s hands after he kills the Lord).  This theme is epitomized when the Forest Spirit says, “If you choose the path of 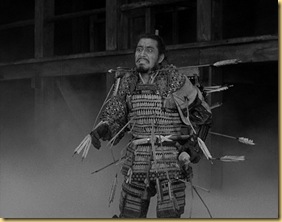 bloodshed, then climb to the very pinnacle of evil.” It’s interesting that he would say that, of course, because he’s the one who set Washizu off to capture a throne covered in blood by prophesizing that Washizu was destined to rule Spider’s Web Castle.

While I was thoroughly enthralled with Washizu’s death scene, there is too much overacting in Throne of Blood for me. Perhaps it’s a cultural thing, or Kurosawa instructed Mifune to ham it up because he wanted to show the depths of Washizu’s madness, but there was too much bulging eyes and maniacal laughs for my liking.  Also, it puzzles me why Kurosawa incorporated Noh theatre into the story with Asaji’s restricted, orchestrated movements, but then at other times she is free to run about unencumbered.  Still, the ending is worth sitting through 105 minutes of overacting.