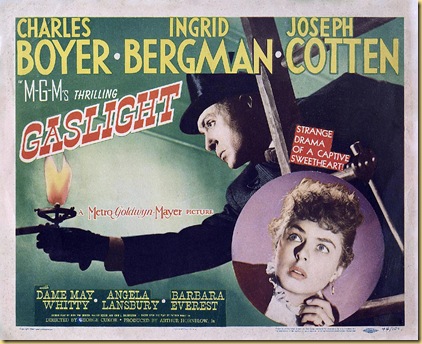 What man would choose jewels over Ingrid Bergman? Liberace does not count…

Director George Cukor’s Gaslight (1944) is a taut drama filled with suspense and anxiety.  Blessed by a spectacular cast of Hollywood heavyweights, Cukor, with the help of MGM’s suppression team, totally eclipsed the 1940 British film version of Patrick Hamilton’s play Gas Light, which was called Angel Street on Broadway. Nominated for seven Academy Awards, Gaslight is an excellent example of what a tight script, good acting, and superb art direction can do to create a truly memorable movie. 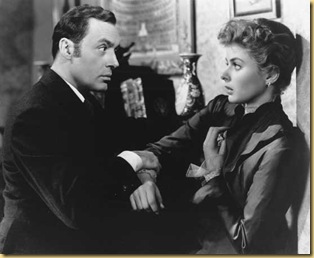 man), a young bride driven to believe she’s going insane by her manipulative, murderous husband Gregory (Charles Boyer).  It is a dark tale of one man’s obsession with finding Paula’s aunt’s jewels at any cost.  What I most admire about the story is that you don’t know exactly what Gregory is up to until the last 20 minutes of the film. Is Paula really going insane or is Gregory gaslighting her? Gaslight is one of those films that when you see it for a second time you pick up on all the clues that point to Gregory’s true intentions.  I’m not sure this is exactly a good thing, because some people might get miffed when the clues aren’t as obvious the first time they watch.  Personally, it doesn’t bother me because I like suspense films that aren’t so clear-cut that you can figure out the mystery in the first 20 minutes.

Who better to play a fresh, young bride driven to the brink of insanity than Bergman—with her angelic beauty and sweet temperament (mind you, this was pre-Rossellini)? Bergman was so enthralled by the Broadway play that she lobbied her Hollywood captor David O. Selznick to loan her out to MGM so that she could play the 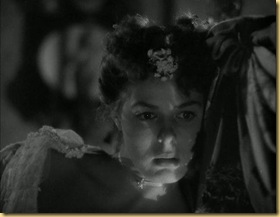 part of Paula. Whatever poor Ingrid had to do to convince Selznick paid off, as she won her first Best Actress Academy Award for her searing performance.  As someone who has watched first-hand as someone goes off the deep end, I have to say that Bergman’s fluctuations between rational and irrational behavior are spot on.  When a person starts to believe that they are losing their grip on reality they fluctuate between extremes.  The best example of this is when Paula confidently decides she is going to the music recital.  Once there she is tricked into believing that she has stolen Gregory’s watch and bursts into hysterical tears.

Boyer plays his suave conniving part well, too.  It took a lot of restraint not to play Gregory too darkly, as this would have hindered the suspense of the story.  Instead, Boyer straddles the line between being a concerned husband and a ruthless manipulator.  Personally, I would have liked to have seen him be a bit more menacing at the end of the film, because it would have added credibility to the idea that he’d strangled Paula’s aunt to death years before.

And then there’s an 18-year old Angela Lansbury, playing 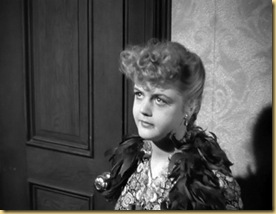 the couple’s impertinent maid Nancy in her film debut. If her Cockney accent doesn’t surprise you, then the saucy way she plays the flirtatious maid will.  What a way to start a career—giving Bergman dirty looks and engaging in light-sexual banter with Boyer.  Cukor said that from Lansbury’s first day on the set it was obvious that she was a born actress. She earned a Best Supporting Actress Oscar nomination for a part that was supposed to be quite small, but Cukor had it expanded when he saw her acting potential.

Joseph Cotton and Dame May Whitty fill out the rest of the cast.  While Cotton’s Brian Cameron plays an integral part at the conclusion, his role is a rather minor 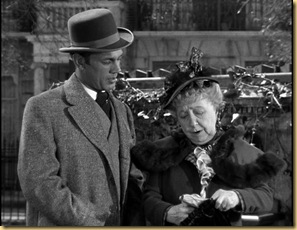 one.  Whitty, for her part, plays the stereotypical nosy neighbor Ms. Thwaites.  I’m not exactly sure what purpose she serves other than mild comic relief. Still, as with any Cotton or Whitty performance, they make their presences known.

Finally, I would be remiss if I didn’t mention the Oscar-winning black and white art direction of Cedric Gibbons, William Ferrari, Edwin Willis, and Paul Huldschinsky.  The plot is Gothic in tone and dressed in Victorian décor, which creates a cluttered, creepy essence.  Their use of fog to literally and metaphorically mask Gregory’s shady behavior is inspired, and their set decorations—especially the over-decorated home—are wonderfully thought out, too.

Overall, Ingrid Bergman’s strong performance and the engaging script are the main reasons I enjoyed Gaslight.  Still, the vagueness of Gregory’s intentions could be off-putting to some.  And, while cinematographer Joseph Ruttenberg earned an Academy Award nomination for his work, I believe the film falls a bit short when it comes to its overall photography.