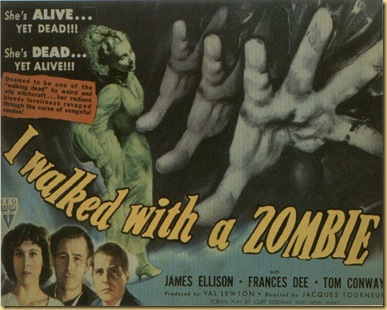 Producer Val Lewton and director Jacques Tourneur made three low-budget ‘horror’ films together for RKO: Cat People (1942), I Walked with a Zombie (1943), and The Leopard Man (1943).  For me, they are slightly amusing looks at the supernatural with a heavy dose of eerie cheese on the side.  The acting is always less than stellar and the set productions are minimal, but the stories are always oddly entertaining and told in a highly unusual way.  Still, with far superior films left off the 1001 List, I find it a tad galling that two out of their three films together made the cut.

I Walked with a Zombie is a tale of voodoo and love. Nurse Betsy Connell (Frances Dee) is dispatched to Saint Sebastian in the Caribbean to care for Jessica Holland (Christine Gordon), a catatonic woman who walks around l 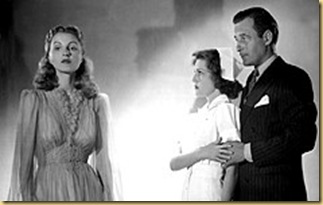 ike a zombie (hence the film’s title). Jessica’s husband, Paul (Tom Conway), is a morose sugar plantation owner who tells anyone who will listen that everything good dies on St. Sebastian.  I suppose he had a reason to be bitter, as before his wife fell ill she planned to run away with his half-brother, Wesley Rand (James Ellison). Anyway, Jessica’s a zombie, Paul is a bore and Wesley is a drunk—oh, and their mother (Edith Barrett) is a pretend voodoo priestess to the superstitious locals.  Obviously attracted to the bizarre, Betsy soon falls in love with Paul and does all she can do to heal Jessica—even going so far as to take Jessica to the voodoo priest (although at the time she wasn’t aware that Jessica’s mother-in-law could have just been called to the house). 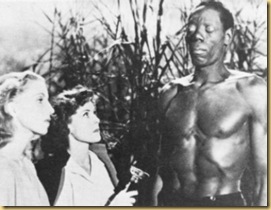 Okay, so what can I say good about I Walked with a Zombie?  Betsy and Jessica’s perilous jaunt into the sugar cane fields to reach the houmfort (it’s where the voodooers gather) is creepy.  Jungle drums fill the air and the wind is swirling, oh, and there’s a beyond frightening gatekeeper (Darby Jones) who they must pass to gain entry to the houmfort. Once there, they encounter possessed looking people gyrating about and a devilish-looking fellow wielding a saber for some ceremony.  While it is interesting that Tourneur and Lewton take a stab at calypso culture, I don’t know how realistic a depiction it was—personally, I hope they let their imaginations get a bit carried away.

Nothing good can really be said about the acting, although Frances

Dee does a passable job.  She was pretty much a B-actress her entire career, but this was one of her better performances.  If anyone deserves any kudos it would have to be Theresa Harris as Alma, the house servant who tells Betsy how to find the houmfort.  Perhaps if there hadn’t been such a color barrier in Hollywood she could have found more meaningful roles.

Yet, the bad acting is not the thing that most troubles me about I Walked with a Zombie. For the life of me I can’t figure out when, why or how Betsy fell in love with Paul. One minute he’s saying the world is full of doom and playing the piano rather poorly, and the next Betsy is declaring her 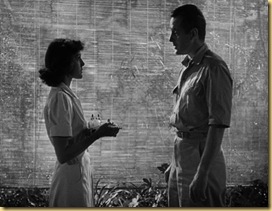 undying love for him—what? Oh, and how didn’t Mrs. Rand’s sons know their mother played voodoo priestess in her free time when they seemed to know everything else that went on on the island?  There are just too many plot holes that go left unexplained. I suppose this was budget related, but still…

Overall, I Walked with a Zombie takes an amusing and unusual look at the world of voodoo. It is one of the better B-films to come out of Hollywood in the 1940s, but it surely isn’t one of the movies I had to see before my death.