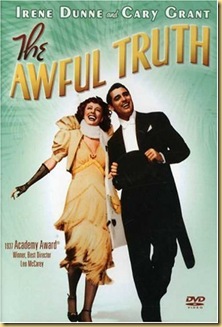 Cary Grant and Irene Dunne were a match made in screwball heaven. Her impeccable comedic timing and his gift for physical comedy made them an irresistible pair. While The Lady Eve (1941) is my all-time favorite screwball comedy, The Awful Truth (1937) comes in as a close second. Perhaps there aren’t any spectacular cinematographic shots or jaw-dropping dramatic performances, but to pull off a comedy filled with such sophisticated wit and engaging execution is something to be admired.

Nominated for six Academy Awards, The Awful Truth is about a New York couple who find themselves in divorce court after a slight misunderstanding: did the car really break down and cause Lucy Warriner (Irene Dunne) to have to stay out all night with her handsome music teacher Armand (Alexander D’Arcy), and why was Jerry Warriner in California when he said he was in Florida? 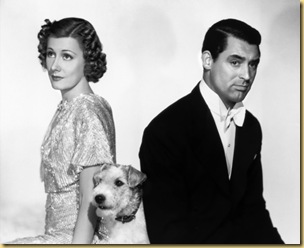 High-strung and hot-tempered are bad traits in one person, let alone two who are married to one another, and so they are granted a divorce with a 90-day waiting period. The only thing that keeps them connected is their adorably smart dog Mr. Smith (Asta/Skippy), for whom they share joint custody. When Lucy becomes involved with slow-witted Oklahoma oil man Dan Leeson (Ralph Bellamy) Jerry becomes jealous and tries to point out why the man is all wrong for Lucy (which he is). And, when Jerry starts spending time with beautiful rich socialite Barbara Vance (Molly Lamont) Lucy literally puts on a show of jealousy for the ages. Does the couple get back together? I think you probably can guess the answer, but how they reunite is a bedroom tale left unspoken—let’s just say they figure out that they were cuckoo for ever doubting their love. 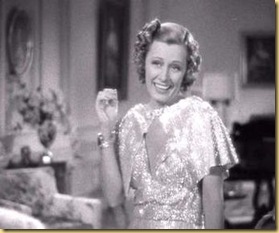 Okay, so what is so great about The Awful Truth? First and foremost, Dunne sparkles as Lucy. Playing a somewhat kooky, flighty woman was nothing new for Dunne, who’d been nominated for a Best Actress Oscar the year before in Theodora Goes Wild (1936), but she elevated her game slightly for the role of Lucy (although she lost yet again to Luise Rainer for Best Actress—really, two years in a row…was Rainer sleeping with everyone in Hollywood?). With masterful facial expressions and expertly delivered lines, Dunne makes Lucy the perfect screwball heroine. Her ability to play both a capricious woman driven beyond the point of exasperation by her husband’s jealousy and a caricature of a low-class cabaret singer bent on destroying Jerry’s romance with Barbara is a delightful study in character contrast. 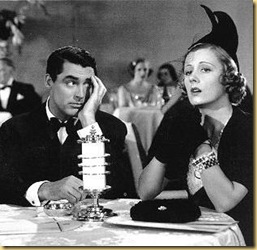 Grant’s combination of sophistication and buffoonery plays exceedingly well. One minute he is the picture of debonair suaveness and the next he is Jitsu fighting with a butler or falling off a chair in the middle of an intimate parlor concert. Grant said that Dunne was his favorite actress to work with, and it shows here, as he and Dunne have perfect chemistry. Every scene flows evenly and neither actor gets the best of the other.

Who doesn’t love a cute dog? And, when you combine cute with smart, you get the perfect canine, and that is what Mr. Smith is. His interactions with both Dunne and Grant are hilarious. Of particular note is 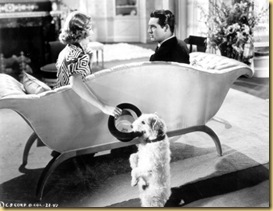 the “Two Hat” scene where Lucy tries to hide Armand’s hat from Jerry and Mr. Smith keeps finding it. When he climbs up on a mirrored table to gain access to the hat it is priceless.

The supporting characters are also one of the reasons The Awful Truth is so successful. Bellamy earned a Best Supporting Actor Oscar nomination for his portrayal of a gullible, slow-witted cowboy. From his horrible rendition of “Home on the Range” to his mama boy discussions with his domineering mother (Esther Dale), Bellamy is a delight. Cecil Cunningham is also wickedly entertaining as Lucy’s Aunt Patsy, who is stone-faced and straight talking. While her lines are few and far between, they are always delivered with just the right tone and gusto.

Finally, I must also say something about Dunne’s wardrobe, which was designed by Robert Kalloch. Dunne always wore clothes well, but 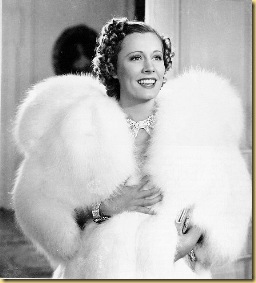 some of the outfits/hats she wore in The Awful Truth took a certain type of woman to wear. From the gigantic white mink coat she enters the film in to a pajama lounging outfit made for the ages, Dunne wears Lucy’s crazy clothes stylishly and confidently. Really, she had to know how ridiculously bizarre some of the hats placed on her head looked, but I expect she realized the clothes fit her character’s slightly-off personality well.

Overall, I adore The Awful Truth. It is a stylish, devilishly funny film filled with memorable scenes and lines. Dunne and Grant’s onscreen chemistry pulls the viewer in and makes everyone root for the couple’s reunion—which is done in a perfectly cuckoo way.