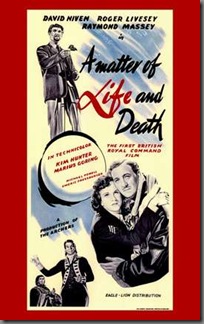 (This post was a participant of “The Archers Blogathon” hosted by The Classic Film & TV Café. To find other wonderful blog entries on this subject please visit the CMBA website.)

The Archers, Michael Powell and Emeric Pressburger, collaborated on eighteen films over a thirty year period (1939-72). Usually, it was Powell who did the bulk of the directing and Pressburger who came up with the story ideas and handled most of the production chores (especially when it came to editing and music). 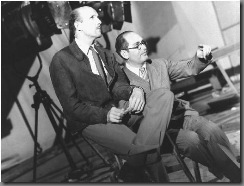 A Matter of Life and Death (1946) was the fifth film they made as the Archers, and is considered by many as their finest. While I don’t share that view (I just love those crazy nuns in Black Narcissus), I do think it is a creatively innovative production that exhibits everything that made the Archer collaboration one of the finest in all of cinema.

Initially, A Matter of Life and Death was conceived as a propaganda film to ease the hostility some Brits had toward American military personnel stationed in England during the war. There were complaints that some American soldiers were insensitive to the deprivations the British people endured as a result of rationing and bombing. I suspect if you were watching this in a British theater in 1946 you would have picked up on some of the propagandistic elements, but these were only a small part of a much bigger message about love and art.

Love at first sight is the most common device used by writers of novels and screenplays. Thankfully, the Archers weren’t common and so the lovers of this story are given their own unique love connection. David Niven plays Squadron Leader Peter Carter, a man about to 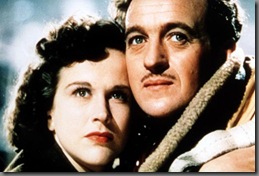 be killed in a fiery airplane crash. Wanting to say goodbye both to his family and the world at large, Peter radios in to give his coordinates so someone can pick up what’s left of him after he jumps without a parachute. He makes contact with June (Kim Hunter), an American radio operator who listens sympathetically to his last words. In that brief conversation they fall in love, which only makes Peter’s coming demise even more tragic. But then there is a literal twist of fate when fog over the English Channel prevents Conductor 71 (Max Goring) from collecting Peter and ushering him into the Other World (that’s its actual name). And, so instead of making his way up a stairway to heaven (which happens to be what the film was called in America), he washes up on a beach near where June is stationed. Their love is affirmed when they meet along the road, and for the rest of the movie they must fight whatever might try to wrest away their happiness.

What I like most about A Matter of Life and Death is its distinctive artistry. Exhibiting the vastness of the universe and the smallness of human existence must have seemed a strange way to begin a film in 1946, but what an inspired way to begin a supremely unique endeavor. Whenever I watch the opening scenes, with the voiceover of the Universe, I can’t help but think how much of an influence this 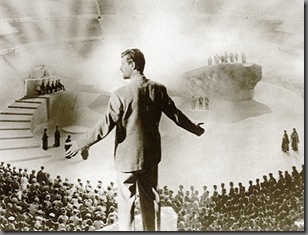 must have had on directors like Stanley Kubrick and Terrence Malick. Taking a page out of The Wizard of Oz (1939), the picture was shot both in Technicolor and black and white. Yet, instead of depicting everyday life in black and white and the the fantasy world as a Technicolor paradise, the Archers did something inspired—the Other World is presented in ethereal black and white while real life is shown in color. Cinematographer Jack Cardiff does an excellent job of presenting both worlds as individual realities. His panoramic shots of the Other World’s courtroom are simply masterful. I find it extremely troubling that his work (as well as every element of the film) didn’t merit an Academy Award nomination.

Alfred Junge’s set design, especially in the Other World, is brilliant. The one image most people remember is the endless escalator to heaven. Its construction was a monumental 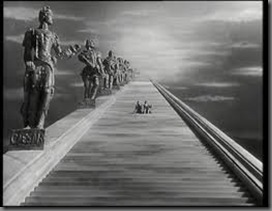 endeavor that took three months to complete, but it was well worth it. Watching Peter and Conductor 71 sitting on the steps and pondering which great mind (usually a passing statue) should represent him in his appeal is almost surreal. The backdrop of endless space is mesmerizing and actually creates a sense of peacefulness. In addition, the design of the Other World’s courtroom is eye-catching, too. The logistics of the massive amount of spectators in the gallery, as well as creating a set design that could hold all of those people, is just mind-boggling. Yet, Junge pulls it off seamlessly.

Other standout production innovations include the use of freeze-frames, the inventive transitions between Technicolor and black and white, and creatively designed perspective shots. If you’ve seen the film you know that whenever Conductor 71 meets Peter in the real world that time freezes—in his words, “time is a mere tyranny.” The most memorable instance of freeze-frame is when June is playing ping pong with Dr. Reeves (Roger Livesey) and the ball stops in midair while Peter and 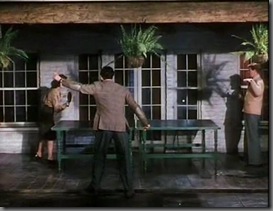 the conductor move about in live action. While this is an interesting scene, it is not what I consider to be the most inspired. That honor belongs to the one where the Archers place the point of perspective behind Peter’s actual eyeball when he goes under anesthesia. The viewer sees what Peter’s eye sees: the medical team, the gas mask, the closing eyelid, then blood vessels, and finally the transition into the black and white Other World. It’s just such an unusual shot design and so different from just about anything that you would see in cinema at that time.

While the overall story is entertaining, I enjoy watching A Matter of Life and Death for its artistic merits. Powell and Pressburger’s cinematic vision is a celebration of creativity and artistry.

Email ThisBlogThis!Share to TwitterShare to FacebookShare to Pinterest
Labels: ***, 1946, Powell and Pressburger