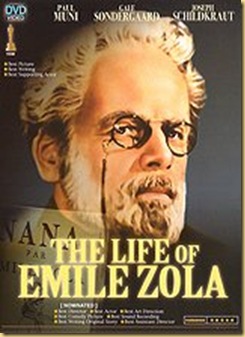 For me, director William Dieterle’s The Life of Emile Zola (1937) is one of those films that I admire but don’t really want to watch over and over again. As a former history teacher it provided a nice tool to visually educate my students about the Dreyfuss Affair, but that’s really it. Yes, it won a Best Picture Oscar, but that had more to do with Heinz Herald, Geza Herczeg, and Norman Reilly Raine’s Oscar-winning screenplay about one of the most scandalous real-life cover-ups to rock France ever, than the overall film production itself. 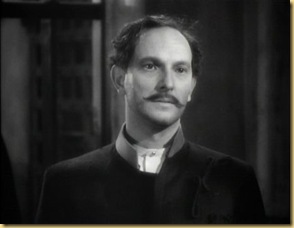 The title of the movie is a misnomer, as the story isn’t really about Emile Zola’s life. It does open with a young Zola (Paul Muni) and Paul Cézanne (Vladimir Sokoloff) freezing in a Parisian garret, but other than a passing reference to how Zola became famous by writing about the debasement of a downtrodden prostitute (Nana, 1880), the story is about the Dreyfuss Affair. Captain Alfred Dreyfuss (Best-Supporting Actor winner Joseph Schildkraut) was accused of being a spy after a note was intercepted by the French General Command. Because he was a foreigner and a Jew, he seemed like the most obvious candidate and so he was court-martialed and publicly denounced. After he is sent to rot on Devil’s Island, his wife (Gale Sondergaard) asks Zola to look into her husband’s case. By this time in his life Zola is fat, gray and a bit complacent in his duties as Paris’ town crier of injustices, but eventually he becomes outraged when he learns that the Army knowingly allowed an innocent man to be tortured in prison for years, while they have acquitted the actual traitor (Robert Barrat) to avoid a scandal. As a result, he penned his most lasting prose, “J’accuse”—an open letter in L’Aurore in which he accused the General Command of covering up the scandal.

The best parts of the film (and the bulk of the plot) take place at Zola’s trial for libeling the Army. Mainly, this is due to Donald 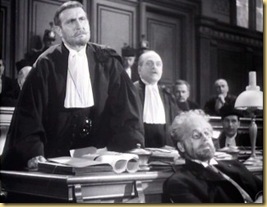 Crisp’s brilliant performance as Zola’s lawyer, Maitre Labori. For me, he was more deserving of a Best Supporting Actor than Schildkraut, but I think Hollywood was becoming politicized by the anti-Semitism running rampant in Europe in the late 1930s and wanted to make a statement. What makes Crisp’s performance so compelling is that it requires him to be glib, consternated, outraged, and flabbergasted by a trial that is orchestrated in such a way that he knows he cannot win.

Still, what most people remember about the trial is the closing argument Zola delivers to the jury. Muni was known for his biopic portrayals of famous men (James Allen, Louis Pasteur, Benito Juarez and many more), so it is no surprise that 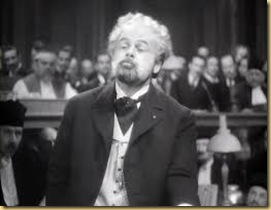 his turn as Zola was so good that he was nominated for a Best Actor Oscar (he lost to Spencer Tracy in Captains Courageous). The impassioned argument he delivers is captured in an extended long take that draws you in. This is achieved by Dieterle placing the camera in what is supposed to be the jury box and having Muni speak directly into it with no cuts. This works effectively well at making the audience outraged, too.

Yet, if it were not for the trial section of this film I don’t think it would merit much consideration. I love Cézanne’s art, but find he gets short-shrift here, which I find disturbing for irrational reasons. I ask you, who is more remembered today: Cézanne or Zola? Ah, but let’s step away from that peeve and mention that we appreciate what Dieterle and his screenwriters did with the Dreyfuss Affair. In a world that was slowly becoming ensnared in anti-Semitism this served as a reminder of how misguided and dangerous it could really be.