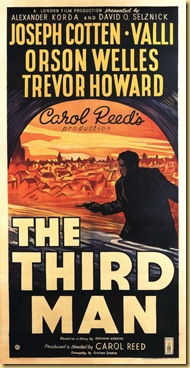 (There possibly could be spoilers contained within this post.)

If anyone ever deserved an Oscar for Best Cinematography it was Robert Krasker for his outstanding work on The Third Man (1949). Yes, the story is intriguing and the actors are engaging, but it’s the cinematogrphy that makes this film the preeminent film noir. 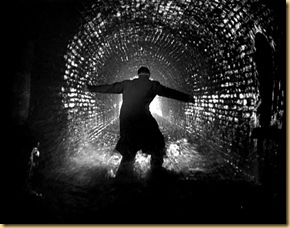 Director Carol Reed was a visual genius and a great handler of enormous egos.  His bold use of off-angle shots and keen understanding of lighting are two of the features that make The Third Man such an original movie. His ability to ‘handle’ the likes of Orson Welles, Joseph Cotton, Trevor Howard, and Alida Valli is what brings the whole production into one cohesive visual masterpiece.  Oh, and he did it primarily on location in a rubble covered Vienna.

The story, penned by Graham Greene, finds American Holly Martins (Cotton) arriving in Vienna to meet his childhood friend Harry Lime (Welles), who has promised him a job. Unfortunately for Martins, Lime has just been killed and is being buried.  A writer of pulp Westerns, Martins finds the story behind Lime’s death suspicious and starts his own investigation.  He meets an eccentric cast of characters as he searches for the truth.  First, there is Major Calloway (H 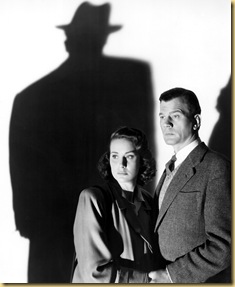 oward), a British officer who claims that Lime was a no-good black marketer who sold tainted penicillin to hospitals which killed and/or maimed hundreds of people.  Then there’s Baron Kurtz (Ernst Deutsch), a friend of Lime’s who carries a small dog around and attempts to convince Martins that Lime’s death was a freak accident.  The problem is that there are conflicting reports about who saw what and when.  The big point of contention is whether two or three men carried Lime’s body out of the street after it was struck by a truck.  Kurtz is accounted for and so is Popescu (Siegfried Breuer), but who was the third man (hence the title)?  It obviously wasn’t Anna Schmidt (Valli), Lime’s actress girlfriend who Martins soon falls for.  It takes a dangerous ride on a Ferris Wheel to reveal the truth, and a claustrophobic manhunt through the Vienna sewers to bring the third man to justice. 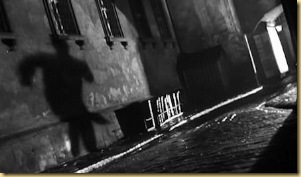 Krasker was highly influenced by German Expressionism and it shows.  When Reed decided that they would use off-angle shots throughout most of the movie I expect Krasker brushed up on the work of Robert Wiene (most notably The Cabinet of Dr. Caligari) and Fritz Lang (probably his Dr. Mabuse). When asked about the off-angle shots Reed replied that he “shot most of the film with a wide-angle lens that distorted the buildings and emphasized the wet cobblestone streets. But the angle of vision was just to suggest that something crooked was going on.” Oddly enough he also said he decided this device wasn’t a good idea and that he pretty much abandoned it for the remainder of his career.  Of course, he may have been influenced by William Wyler’s spirit level gift, which Reed was given after Wyler viewed the 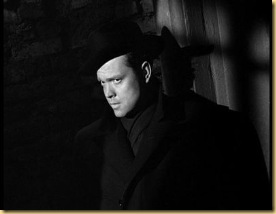 picture. I, for one, think it was a brilliant idea and adds a visual uniqueness to the film.

The German Expressionists also knew how to use light and shadow, and what noir worth it’s salt wouldn’t employ the manipulation of light to create lasting images?  There are several scenes in The Third Man that I could point to to illustrate my point, but I’ll just discuss my two favorite ones.  The first is when the third man is revealed standing in the shadows of a doorway by a beaming light.  His face is fittingly half-lit with a wonderful smirk.  The second is when what seems like the entire police force is staked out to capture 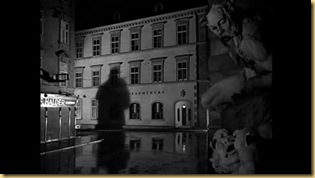 the third man and a larger than life shadow emerges at the top of a dark street and slowly becomes smaller as it comes closer to them to reveal that it is a balloon vendor.

All of these wonderful shots are set to Anton Karas’ memorable “Third Man Theme”. The story behind this could have also been made into a film. Karas was discovered by Reed after the director heard him playing a zither in a Vienna beer garden while Reed was location scouting. Thinking the zither sound an apt representation of Vienna, Reed asked Karas to write and record the film’s score. When the song was released in the United States it topped the charts for eleven weeks—really.

The acting in The Third Man is top-notch, too. Cotton plays disillusioned well and Valli is convincing as a somber, realistic woman of the world.  Howard’s Calloway is the quintessential British officer and Deutsch is exceptionally smarmy as a dilettante manipulator. But the standout performance belongs to Welles, who had the audacity to make his vile character one of the most likable villains to grace the silver screen. There’s pep in his step and a wicked gleam in his eye in his few scenes, but they are so freaking memorable. 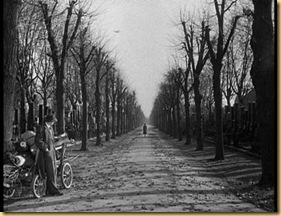 But, Welles does not have the honor of being in THE most memorable scene in The Third Man—and THE most memorable closing shot in all of film.  That honor belongs to Cotton and Valli—and a tree-lined street adjacent to the Friedhof Cemetery.  It is a 65-second stagnant long-shot of “Martins leaning against a wagon in the left foreground as Anna approaches from a great distance, getting progressively closer, and - without so much as a glance in his direction - finally walking past him and out of frame. Martins then lights a cigarette and in exasperation, throws the match to the ground, after which the picture fades to black. The strains of Karas's zither music are heard 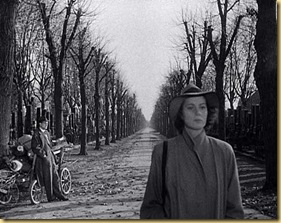 throughout the shot,” (from Richard Raskin’s Closure in The Third Man: On the Dynamics of an Unhappy Ending). Quite simply, it is an unforgettable way to end a movie.

Overall, I adore the visual elements of The Third Man. The acting is good, as well. Yet, what prevents me from pushing this film into four-star status is that it does drag at points.  I don’t know if this is because there are so many awesome shots without dialogue, which seems to make me wish the characters would stop talking so I can concentrate on the visuals or what.  Yes, I know that sounds strange (or perhaps stupid), but there must be something lacking in a film if what I remember most are the shots without any dialogue.