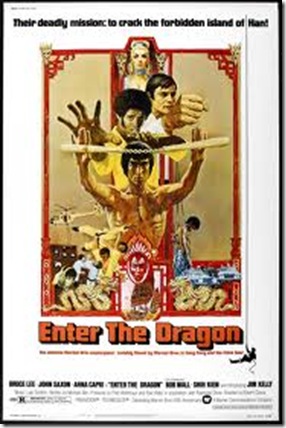 This is a martial arts film.  Anything that doesn’t involve Bruce Lee using his fighting skills to decimate an entire legion of minions is bad…real bad.

I’m not sure if director Robert Clouse envisioned Enter 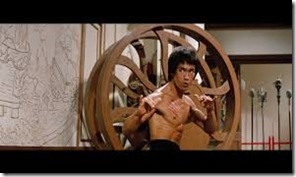 the Dragon (1973) as a Hong Kong version of a James Bond film or not, but it sure seemed as though he did.  Let’s star with Lalo Schifrin’s musical score. If you’ve heard both it and the Bond theme, then you must see some similarity. Granted, Schifrin’s theme sounds more like Asian funk (if that is even a style) than anything, but it is definitely reminiscent of the Bond theme.  I wonder if Monty Norman sued Schifrin over authorship like he did John Barry… 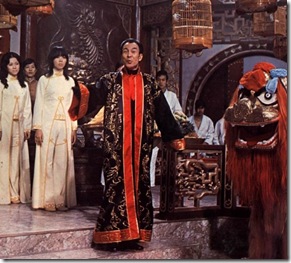 Then there’s Mr. Han (Shih Kien)—he is an amalgamation of Bond villains dressed like the Chairman from the Japanese version of Iron Chef.  Han is an opium smuggler—just about every Bond villain is a smuggler of something, be it gold or some type of weapon.  Han has a metal hand—Dr. No has metal hands.  Han likes to pet his cat—Blofield loved to pet his kitty.  Han has an extremely tall and mute assassin named Bolo (Bolo Young)—Odd Job was mute and Jaws was a giant.  Hopefully, by now you are seeing what I saw.

Yet another Bond-esque element in Enter the Dragon is the objectification of women. Dr. Han’s private island is not only used as a martial arts dojo, but also as a brothel.  Ahna Capri plays Tania, the resident madam to a 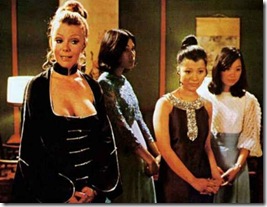 stockpile of the United Colors of Benetton of whores.  Their sole purpose is to service the needs of Dr. Han’s guests—and serve as guinea pigs for his opium.  The one woman on the island who is supposed to be a British agent (Betty Chung) is briefly allowed to speak to Lee’s character and then plays no other role in the movie.

Really, the only reason anyone should watch this film is to see Bruce Lee in action.  Way before CGI and wire work (ala Crouching Tiger, Hidden Dragon), Lee demonstrated why he was (and still is) so revered by martial arts enthusiasts.  While I don’t believe any man could seemingly

wipe out an entire island of skilled fighters, it is still amazing to watch Lee’s moves.  Even I have to admit that the mirror fight sequence between Han and Lee is something special.

It’s a good thing Lee was a master at something, because his acting was less than desired. Of course, he was in good company, because between the lame lines that he and the less than stellar cast were asked to utter and the gaping plot holes, Enter the Dragon is really a B picture dressed up as a wannabe Bond film.