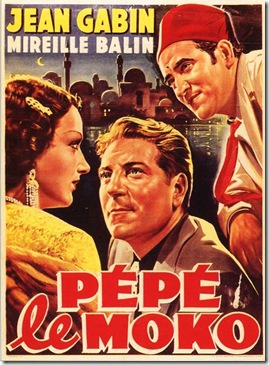 Director Julien Duvivier’s atmospheric depiction of a Frenchman trapped in the Casbah by his own criminal undoing was the inspiration behind Graham Greene’s novel and screenplay, The Third Man (1949), as well as the 1938 English remake, Algiers, starring Charles Boyer and Hedy Lamarr. All three films share an undeniable element of fatalism and entrapment, but only one truly represents 1930s French poetic realism. 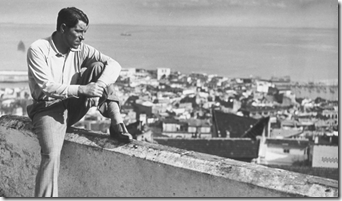 t from the police in the winding labyrinth known as the Casbah.  As long as he stays in the Casbah, Pepe is protected by the other criminals and outcasts who live and work amongst him.  Even the local police inspector, Slimane (Lucas Gridoux) doesn’t dare to capture Pepe within the confines of the Casbah.  Yet, Pepe longs for Paris, and when a beautiful Parisian woman (Mireille Balin) ventures into the Casbah, Pepe finds himself tempted to trade one prison for another one. 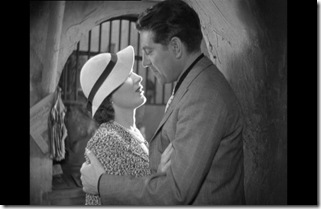 (2006), Duvivier employed the use of bars and grates to signal Pepe’s inescapable imprisonment inside the Casbah.  In addition, the director used tight camera shots, as well as extreme close-ups to create a sense of claustrophobia. Whilst he is free to roam the Casbah, everything around him—the narrow corridors and the crowded streets—are a reminder of his self-made prison.  Marc Fossard and Jules Kruger’s cinematography expertly captures the staid, fatalistic feel of the Casbah.

While Pepe le Moko is not nearly as romantic as Algiers, it does push the envelope more than its Hollywood remake.  This was possible, of cou 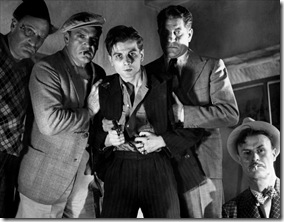 rse, because it was made in France where the censors were more liberal—except in the Vichy days, when it was banned for being too fatalistic.  We get to see a two-faced informer killed and another man take his own life instead of going to prison.  Oh, and then there’s the fact that Balin’s character is obviously a kept woman who has no qualms about going to a brothel for a rendezvous with another man—just your typical depiction of acceptable French mores.

What makes Pepe le Moko stand out, though, is its ending.  (This is when the spoilers begin…) From the tracking shot of only Pepe’s feet running down the Casbah steps to the final image of Pepe’s dead body enwrapped around a closed gate, Duvivier memorably ends his film in such a way that once you’ve seen it you will never forget it.  There is no American sentimentalism allowed to finds its way into this movie’s last moments. No, what we are dealt is French poetic realism: as Balin’s character longingly stares up at the Casbah believing Pepe is dead, he stands at the gates of the boat dock, handcuffed, yelling out her name just as the boat’s horn bellows.  Accepting his final imprisonment, Pepe then knifes himself and dies wrapped around the gate that separate’s him from his love, freedom, and France. What a way to end a film!

Overall, Pepe le Moko is a gritty atmospheric movie, with a claustrophobic feel.  It also made Jean Gabin a true French cinema icon. Yet, it is the ending that makes this film memorable.