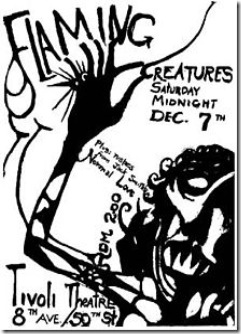 Sometimes I wish I were dead so I wouldn’t have to watch films like director Jack Smith’s Flaming Creatures (1963). No, I’m not one of those people who would have rioted in the 60s and 70s whenever there was an underground showing of it—I could care less about transvestites, homosexuals, and graphic nudity.  No, I’m one of those people who like a movie to have a plot and make some kind of sense—Flaming Creatures was beyond my comprehension. 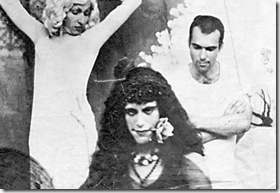 The only thing that got me through this long 45-minute film was the music.  Kitty Wells’ “It Wasn’t God Who Made Honky Tonk Angels”, the Everly Brothers’ “Be-Bop-A-Lula”, and “Siboney” are used throughout this mostly silent film (that is if you don’t count lines like “Do they make a lipstick that doesn't come off when you suck cock?” or the incessant screaming during the pseudo rape scene).

Overall, Flaming Creatures is one of the worst films I have ever seen—EVER.