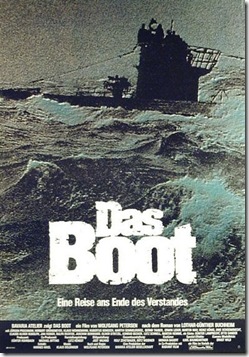 World War II lasted approximately six years. Perhaps Das Boot (1981) didn’t last quite as long as that, but at times it seemed as though it did. I watched Wolfgang Petersen’s director’s cut, which was a long 209 minutes (which really is not that long when you compare it to the 300 minute BBC mini-series version). Don’t get me wrong, I like the film—I just wish it were a tad shorter.  I expect this taut war drama would have ventured into masterpiece land if a bit more celluloid had found its way to the editing room floor.

Adapted from the 1973 German novel of the same name by Lothar-Gunther Buchheim, Das Boot tells the story of a German U- 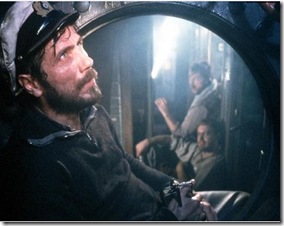 boat crew who encounters countless brushes with death only to die (at least most of them) in the most sickeningly ironic way imaginable.  There really isn’t much of a plot—after a raucous night at a whorehouse, the crew goes out to face the perils of the Atlantic Ocean in their submarine and the rest of the film centers on the dangerous nature of their mission.  Unlike most maritime movies, there is no mutiny or clashing of personalities.  The U-boat is the star, and nasty British destroyers armed with depth charges and sonar are the villains.

Das Boot was nominated for six Academy Awards, four of those were for technical elements: cinematography, film editing, sound, and sound effects editing (the other two nominations were for Best Director and Best Adapted Screenplay).  There’s a reason for this—the film is a stunning visual and audio experience. The models used 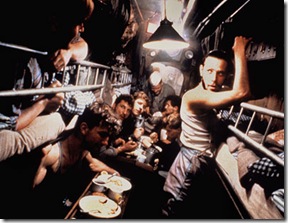 for the submarine were precisely the same as an actual WWII U-boat. The realistic cramped quarters were expertly filmed by Jost Vacano’s hand-held Arriflex camera. When you first encounter the hand-held shots you might feel seasick yourself, but once you get your bearings you will just feel claustrophobic—both, I expect, were intentional.

And, then there’s the sound.  Usually I don’t notice sound—unless it is extremely, jarringly loud—but here you notice it.  Like the men aboard the U-boat, you listen for the dangers above. It is the sound that builds the drama. When will the depth charges drop? How close is that ping of sonar?  Is that creaking sound a sign  that the 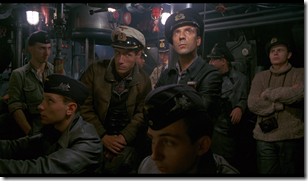 boat has dived too far down and is about to cave-in like a crushed can?  The use of sound to create suspense and apprehension is masterfully done.

While I might complain about how long the film is, I somewhat understand what Petersen was trying to do.  Anyone who has ever been in the military can tell you about something called “hurry up and wait”.  The Atlantic Ocean is a big place to hide out and wait for convoys and destroyers to come along.  So, when there’s not much happening above water for extended periods of time, the U-boat sailors endure weeks of endless boredom.  This tedious, tiresome waiting game is on full display here. Yet, when action does come their way, it comes fast and furious and is thrilling to watch. 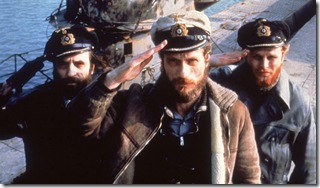 Finally, a word about the beyond ironic ending of Das Boot. How symbolic was it for the men to survive the dangers of the sea only to meet their fate at the hands of an air raid at a parade welcoming them home? The Nazis were big on parades and propaganda, so to have Petersen end his film in such a bizarrely ironic way flies in the face of Buchheim’s criticisms that Petersen’s film was a cross between a “cheap, shallow American action flick and a contemporary German propaganda newsreel from WWII.” I didn’t see anything propagandistic about the ending of this film—and many other sections were hyper-critical of the German war machine.

Overall, Das Boot is a superbly directed film with stunning visuals and sound effects.  It is a taut drama that never seems unrealistic and it makes the viewer feel as though they are a U-boat crew member.  My biggest qualm is the movie’s length, but even that is not too egregious when you consider the overall scope of the story.