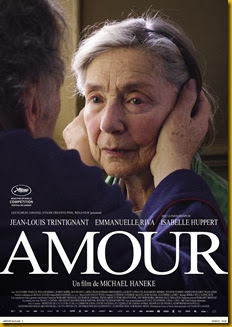 So, so depressing—that is the best way I can describe director Michael Haneke’s Amour (2012).

For close to two hours I sat in abject misery watching Emmanuelle Riva’s character slowly descend into physical and mental incapacitation after suffering a series of strokes, while her husband (Jean-Louis Trintignant) helplessly watches.  I’m not actually sure what age group this film appeals to—most under-thirties probably would be bored, while everyone else probably endured the film with a complete sense of dread and depression.

Without a doubt, the story is poignant and the performances are powerful, but I’ve come to a point in my life where watching emotionally draining films with no life-affirming momen 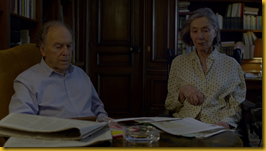 t or resolution just rub me the wrong way.  Facing immortality—yours or a loved one’s—is difficult enough in the realm of reality, why must it be faced so brutally in the fictional world as well.  Yes, art imitates life, and the best art touches on our humanity, but when there is no glimmer of hope at the end of anything, in this case a film, what really is the use?  It’s like reading Thomas Hobbes and Friedrich Nietzsche at the same time while swigging a bottle of gin and swallowing a bottle of sleeping pills.

All of that said, the mere fact that Amour elicited such a strong emotional response from me tells me that Haneke and his cast did a spectacular job in telling one of the most emotionally raw stories about death that I have ever seen.  While I did not enjoy watching the film, I was mesmerized by it—yes, this IS possible.  I didn’t check several times to see how much longer I would have to endure the agony because the movie was asinine—I did it because I wanted to know when I would finally be able to stop watching such heart-wrenching filmmaking. 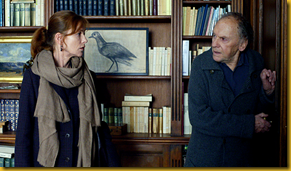 This in itself is surprising, as most of Haneke’s work (Cache {2005}, Funny Games {1997}, The Piano Teacher {2001}, and The White Ribbon {2010}), at least for me, is anger-inducing.  All of his films, this one included, are uncomfortable to watch.  His films are usually filled with mentally unstable people who do extremely irrational things in very calm manners.  As such, he presents cinema that is jarring and exhausting to watch. Yet, Haneke’s Amour has something new in it—heart.  While he would never allow sentimentality to creep into one of his movies, Haneke does permit the viewer to feel some empathy for his characters this time. Still, there is some Haneke callousness in the presentation of the couple’s daughter, Eva (Isabelle Huppert), and a nurse who is fired for abuse, although we don’t see it.

Overall, Amour is a gripping story that I hope I never watch again.