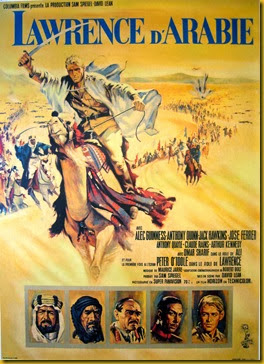 Director David Lean’s Lawrence of Arabia (1962) is an epic, three and half hour-plus film about how T.E. Lawrence (Peter O’Toole) unwittingly won Saudi Arabia for the British military during World War I.  On the one hand you could say the production was grand and the cast renowned, but on the other hand you could say the film was too long and comprised solely of men—there are only brief sightings of women.  As such, the film often drags and has a primarily testosterone infused plot—even if there are some homoerotic themes to be found.

The film was nominated for a whopping 10 Academy Awards and won seven: Best Picture, Art Direction, Cinematography, Editing, Sound, Original Score, and Best Director.  While it garnered two acting nominations, I must say that I was not overly impressed by anyone in this 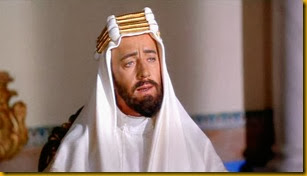 dream cast other than Alec Guinness and Omar Sharif. For me, O’Toole gets a bit hammy in this and Anthony Quinn’s performance is just the epitome of overacting.  Perhaps Sharif had an advantage on most of the cast, as he was actually from the Middle East (Egypt), but his performance as Sherif Ali is engaging and believable, and he deserved his Best Supporting Actor nomination. While Guinness may not have been from the Middle East, he is particularly memorable as King Faisal. I expect he took great pride in doing so well in a role that was originally supposed to be played by Laurence Olivier.

Whenever I think about Lawrence of Arabia I remember an endless desert, camels, and trains being blown up.  The sheer size of the production is mind-boggling, which is one of the reasons I think it is still so highly regarded by film critics.  Filming with a cast of thousands, comprised of both people and animals, in the desert 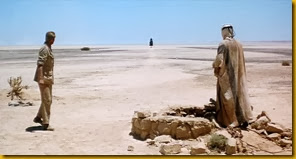 was a monumental task for Lean.  Of course, Lean was no stranger to large productions (The Bridge on the River Kwai and Oliver Twist), so he knew quite well how to be the ringmaster of such a massive circus.  He benefitted greatly from having one of the greatest British cinematographers, F.A. Young, doing the heavy lifting.  Really, it’s not the story that makes Lawrence of Arabia such a memorable movie—it’s all about the images captured by Young. And, these striking images paired with Maurice Jones’ unforgettable score make the perfect pairing.

In a post-colonial world, Lawrence of Arabia can be a troubling film.  It was actually banned in many Middle Eastern countries (sans Egypt) because of the way it depicted Arabs. The whole idea that Lawrence was some sort of messianic figure to the Arabs somehow infantilizes them.  Also, the depiction of Arabs as gullible savages did not play well in newly emancipated Arab nations. 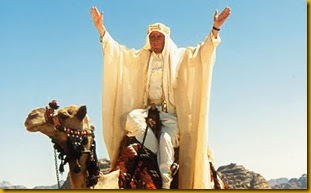 While no one should ever condone terrorism, there is a reason many in the Middle East don’t like Westerners—you ask them to help you free themselves from the yolks of the Ottoman Empire with the promise of self-rule and then take them over yourselves to plunder their resources (mainly petroleum and gemstones) and there is bound to be some animosity.

Overall, Lawrence of Arabia is a masterful work of brilliant cinematography.  The story is somewhat interesting, but if you are a student of history the blatant inaccuracies in the movie can be unpleasant to endure. Fine performances from Sharif and Guinness, at least, temper this unpleasantness.