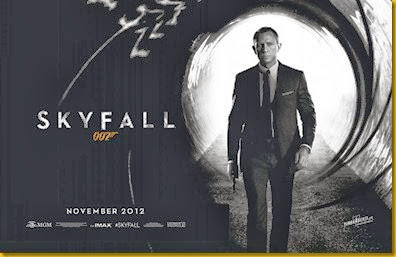 Daniel Craig is certainly the best Bond since Sean Connery, and he is most assuredly the best looking Bond ever.  Yet, once I pushed all of that aside and actually watched director Sam Mendes’ Skyfall (2012) I wasn’t all that amused.  Action sequences galore—guns, explosions, runaway trains, speeding cars and motorcycles—and a crazy baddie (played by Javier Bardem) ripe for a visit with Freud just isn’t enough for me.  Of course, I’m not a 007 enthusiast and so the film that celebrates Bond’s 50th Anniversary wasn’t as special for me as it may have been for others.

Skyfall is about resurrection—and I expect continuation of the franchise.  A wild chase through the streets of Istanbul (and the aisles of the Grand Bazaar) finds Bond atop a speeding t 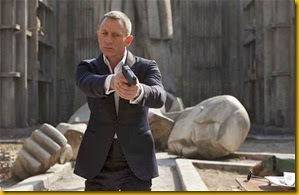 rain trying to recapture a stolen hard drive that contains the names of MI6 agents.  When M (Judi Dench) orders Eve Moneypenny (Naomie Harris) to take out the man with the hard drive (Ola Rapace), she accidentally shoots Bond and he is presumed dead.  When MI6 headquarters are blown up, Bond comes out of hiding. Hooked on booze and pills and out of shape, Bond is asked to hunt down the man behind the assault on the beacon of British intelligence.  He finds a psychopath named Raoul Silva (Bardem), who has it in for M because she once traded him for other agents and cyanide destroyed his teeth. The remainder of the film revolves around some Freudian feud between Silva, M, and Bond, and only the death of one or two of them can bring it to an end.

Like all Bond films, the production was well traveled—Istanbul, Shanghai, Macau, London, and the moors of Scotland all make an appearance.  Roger Deakins’ cinematography is spot on as usual (see Barton Fink, No

Country for Old Men, and O Brother, Where Art Thou?, among many others) and he does a great job with all of the exterior shots. The shots of the Underground and the underground labyrinth that MI6 relocates to are tightly constructed and do a nice job of showcasing the Old Vic tunnels.  If I had to pick one scene that really stood out, it would be Bond’s waterway entrance into Macau—a dark night and sea illuminated by water lanterns always makes for a dramatic entrance.

And, just as every Bond film must have a crazy villain, Skyfall has Javier Bardem as Silva. Obviously Bardem knows how to play a psychopath (see, again, No Country for Old Men), but thi 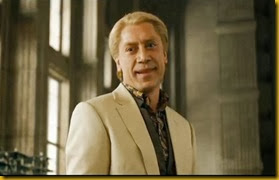 s particular psycho was a bit over the top—of course, Bond usually requires an over the top nutter. The biggest irritant was that Bardem was a blonde with orange eyebrows, but his obsession with M was also troubling.  Referring to her as “Mother” and blowing up buildings, the Tube, and a nice Scottish manor house only to ask her to blow out both their brains just seemed counterproductive.

The objectification of women is a Bond staple, but somehow, over the years this has been toned down a tad. Besides having  sex with an unnamed woman whilst on sabbatical and engaging in flirtatious talk with Ms. Moneypenny, there was only Berenice Marlohe to have sex with in a shower before her untimely death.  Of course, with M playing such a pivotal role 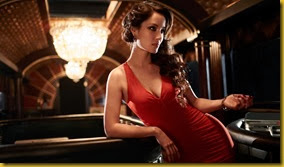 in Skyfall, I can see why the old female objectification theme had to be somewhat diminished.  We will no doubt see Ms. Moneypenny in the next Bond film and with Ralph Fiennes taking over as M, perhaps we should wait until Bond No. 24 to see if this continues.  Still, it was nice seeing more of Craig’s shapely physique than any would-be Bond Girl.

Overall, Skyfall was your usual action film.  Boom, bang, and pow happened.  Things exploded, people got shot and stabbed, and the good guy won.  I was not compelled by the story or bowled over by anyone’s performance.  There were pretty places and people to look at and a lot of ado about nothing happened.  Quite simple, it was a Bond movie.