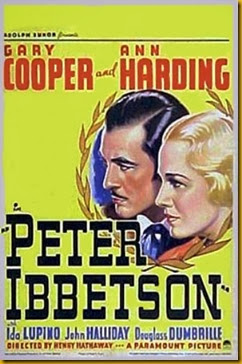 As a fan of Gary Cooper, I must say that I was sorely disappointed by director Henry Hathaway’s, Peter Ibbetson (1935).  When I think of Cooper I don’t envision a pencil mustache, an five-second British accent, and surrealism.  This is not to say that this is a bad film—it’s just unbelievably weird. 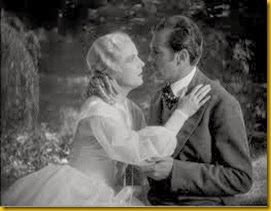 they would reunite as adults and live happily ever after once they overcame some Hollywood obstacle.  My goodness, I did not envision a murder conviction, a broken back, and, wait for it, a nighttime dream world where the separated lovers meet each night to skip through fields and dodge falling rocks.  Granted, it wasn’t your usual Hollywood story, so for that it gets originality points, but, oh my, when I try to wrap my mind around dream synchronization it just makes me giggle.

The acting was passable, but nothing to rave about either.  Cooper, who plays Peter Ibbetson, seems a bit uncomfortable in the role—or perhaps I am projecting my unhappiness with his pencil mustache with how I viewed his performance.  Still, he seemed stifled in this and his easy-going naturalistic acting style seemed to be missing.  Ann Harding, who plays Peter’s dream partner Mary, is much better in the first half of the film than in the second—so I guess that means she gave an uneven turn here.  I much preferred her when she played the spunky Duchess of Towers than when she morphed into the Dream Weaver. Again, my dislike of this plot device may have hampered 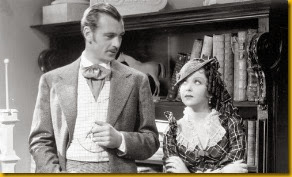 my viewpoint of her second-half performance.  And, then we have a very young Ida Lupino speaking with a sort of Cockney accent as a girl Peter escorts around the French countryside. It was refreshing to hear Lupino use her British accent—as she was English—but I expect she did not speak with a Cockney accent at the Royal Academy of Dramatic Art, either.

The most impressive thing about Peter Ibbetson is Charles Lang’s cinematography.  He and director Hathaway obviously wanted to depict two different worlds—reality and dreamland (for lack of a better term, but I suppose you could say fantasy, too).  No surprise here, but Lang’s surreal world is full of silhouettes and expressionistic photography.  I expect the translucent shots of people walking through prison bars was a highlight for many viewers (even if it was 1935 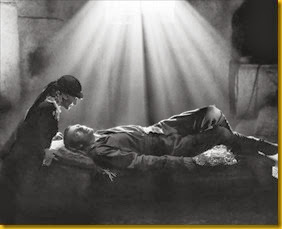 and film had made great strides since Victor Sjostrom’s The Phantom Carriage in 1921).  Even I have to admit that Peter’s dream tower was pretty impressive (kudos to art directors Hans Dreier and Robert Usher)—and fitting, as his lover was the Duchess of Towers.  However, I was not amused with it exploding and raining rocks/debris down on two people who were dreaming.

Overall, I found Peter Ibbetson to be a unique film (especially for the 1930s), but I wasn’t overly impressed with the overall product. The film is uneven and I just couldn’t allow myself to take the plot seriously.  This may sound strange coming from someone who adores The Wizard of Oz (1939), but there’s a big difference between the two films—Dorothy was the only one dreaming!