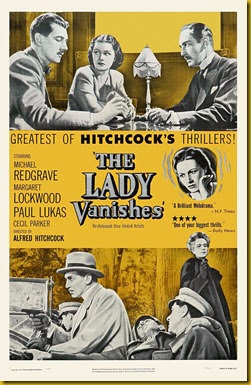 I’m not certain what most people see when they watch director Alfred Hitchcock’s, The Lady Vanishes (1938).  To many, it is the most suspenseful and wittiest of his British films.  Perhaps it is the wittiest, but I would dare say that The 39 Steps (1935) is far more suspenseful.  Still, those points aren’t really  what I contemplate when I watch this movie.  What I think about is how politically symbolic it is—perhaps without even trying.

While The Lady Vanishes premiered in London on October 7, 1938, and, thus, could not have been affected by Neville Chamberlain’s idiotic “Peace for Our Time” speech on September 30, 1938, regarding the Munich Agreement, the movie 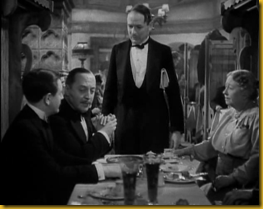 is a reflection of its time.  First, the film begins in the small, fictitious European country of Bandrika, which has just suffered an avalanche that has blocked the railway.  To me, the avalanche is Nazi Germany—which would scoop up the Sudetenland after Chamberlain’s act of appeasement.  As a result of the avalanche, a small group of British citizens find their trip back home delayed and they must lodge overnight in a crowded hotel infested with all sorts of Continentals who don’t speak English and seem unfamiliar with common  British manners. In an uncivilized world (any European country east of France in this case), the British, of course, are overly civilized—which, by the way, was causing them all sorts of trouble with dealing with Hitler.

Then there are the principal leads: Margaret Lockwood and Michael Redgrave.  Iris Henderson (Lockwood) is an heiress returning to England to marry a man she obviously doesn’t love because it is time for her to settle down.  Gilbert (Michael Redgrave) is a whimsical musicologist who is researching regional folk music and customs. Together, they are the British Empire: practical observers of the European conundrum—the Nazis. When Iris’ takes a flower pot to the skull, which leads her to blackout on the train 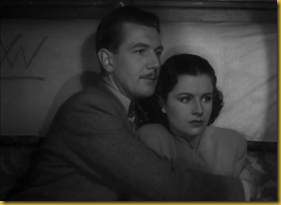 , her worldview becomes a bit off-kilter—as had the British mindset during Hitler’s Anschluss of Austria.

When Iris awakes, she is tended to by the kindly Ms. Froy (Dame May Whitty), who unfortunately vanishes (hence the title) soon thereafter.  When Iris attempts to find Ms. Froy she finds herself fighting against two groups of people: the conspirers and the do-nothings.  The conspirers are a mix of Europeans (who seem to speak Italian and German) who work together to trick Iris into believing that her bump on the head is causing her to mistrust them, and that Ms. Froy is not missing.  And, then there are the do-nothings, who all happen to be British.  There are the adulterers (Cecil Parker and Linden Travers), who don’t want to become involved in case of scandal, and then there are Caldicott (Naunton Wayne) and Charters (Basil Radford), two British cricket enthusiasts who would rather stay mum about having seen Ms. Froy than miss an all-important cricket match.  I view this as a statement that scandal leads to confrontation and that it is better to preoccupy oneself with unimportant distractions than 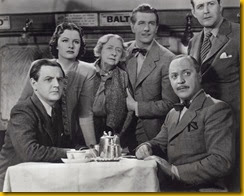 seeing what is truly happening around oneself.

And, then there is the stranded train scene.  By this time, with no help from their fellow British passengers, Iris and Gilbert have recovered Ms. Froy and are trying to convince their fellow travelers that something is amiss in whatever Godforsaken European nation they are stranded in.  It takes a bullet to the hand for Charters to believe that they are in grave danger and Cecil Parker’s character, a pacifist, gets shot down while waving a white handkerchief in the air.  It is not until the British citizens band together against their enemy that they can escape danger.

Oh, and Ms. Froy—why was she “vanished” by the Europeans in the first place?  She was a British spy on her way back to report that two Euro 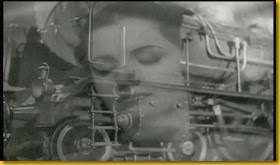 pean nations had made a secret pact with one another.  Please pick one: the Non-Aggression Pact between the Soviets and Germany or the Pact of Steel between Italy and Germany, both of which were signed in 1939.

I expect mine is an unusual viewpoint of The Lady Vanishes.  Perhaps you would rather I discuss how the serenader is killed by an unknown person via shadow or that Hitchcock employs birds and a magician’s disappearing woman cabinet to make a statement?  Or what about the fact that one of the conspirators (Paul Lukas) is a likable villain or that the heroine finds herself in world where reality is pitted against illusion?  All of those common Hitchcockian themes do appear in the movie and work quite well, but as a historian I see an accidentally  politically prophetic film.